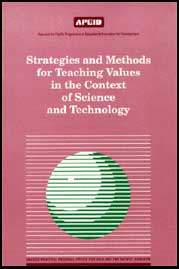 Chapter Two: Concept Identification and Formation of Values Through Teaching of Science

Science education is one of several media through which society intends to transmit what it considers to be clear, worthwhile, helpful and valuable to the present and succeeding generations. The educational process necessarily includes components of culture and cultural heritage, norms and codes evolved over a period of time which may be closely linked to morals and ethics. Further, the inherent human tendencies to be of help and of service to fellow beings also need to be continued and strengthened. These are valuable today and perhaps valuable enough to be passed on to succeeding generations. The above refer to what are called collectively, 'values'.

The workshop in considering the concept and perception of values noted that they were linked to the various dimensions of the human person as a result of his learning and his every day experiences. Cultural heritage, traditions, and beliefs play a very significant role in shaping the individual's values. These give him a sense of purpose and meaning in life.

The individual is the focal point in any effort which intends to develop and form values. These, in an individual, are a measure of what is considered good, desirable and acceptable. Values are pragmatically perceived as qualities of human behaviour, thoughts, feelings and attitudes that need to be accepted, imbibed and cherished by the society. These encompass modes of conduct, codes and norms which every society evolves over a period of time.

Values education today forms an integral part of the education system of each participating country, spreading across levels, stages and subject disciplines. While generally the values education component is infused and integrated in appropriate subject disciplines, it is also offered as a separate course of study and learning in some. A combination of both approaches is also adopted. The interesting aspect that emerged in the workshop discussions was the commonality in trends, issues and problems. Countries are concerned with changing family structures, erosion of spiritual and moral authority, rush towards material acquisition and possessions and indigenous culture taking a back seat.

The workshop noted the use of various programmes, such as extra curricular activities, school projects, school assemblies, literacy and education campaigns for values orientation. These need to be utilized more in the future.

Education of every individual includes values components. However the workshop agreed that, it is still open to discussion as to how best this could be achieved. Could values be inculcated, cultivated or imparted? Could these be presented before the learners and are likely to be accepted? Is certain amount of indoctrination desirable? Several such questions were discussed by the workshop.

The education system alone cannot be solely responsible for values education. The parents, the community, the social and political systems also have to play a significant role and take responsibility. In education, science, as with other areas, could contribute effectively.

Scientific and technological advances have created impacts resulting in the acceleration of the process of social change which, in turn, affects economic, cultural, political and religious sub-systems. Science education is now a compulsory component of basic education systems in most of the countries, at least for the first eight or ten years. It's objectives include developing rationality and scientific attitudes among future citizens, and include the following:

a) longing to know and to understand;

b) willingness to collect data and attempt to find meaning in the exercise;

c) respect for logic and skill to utilize it;

f) possibility of increasing happiness and quality of human life by decreasing hunger, misery and exploration;

h) need for verification; and

i) willingness to work for humanity and listen to opposite view points.

These characteristic of a scientific temper clearly project the importance of science teaching and learning in the context of values education.

In the present situation the impact of science and technology is ever growing. This, the workshop considered, added to the importance of the values component in science education. It is dependent on the development of understanding of science by the individual. Science could help in developing concern for all forms of life and the environment that sustains it. While the cognition component of science is essential, the affective is crucial to the very survival of humanity. The workshop recognized that there is a growing concern that the emphasis on affects can no more be left to 'hidden' curricula, but needs to be explicitly emphasized and enriched. The pressures of the knowledge explosion and the consequent enhanced curriculum load keeps science teachers too busy ensuring that the performance of their learners in cognitive areas is good. This needs to be checked. There should be a balance between theoretical knowledge, technological competence and the individuals moral understanding and overall appreciation of humanistic and cultural values related to science and technology.

Values identified in various forms and different education systems have also listed these in different patterns. The workshop generally agreed that a major categorization could be in terms of the humanistic, moral ethical and cultural with the moral and ethical usually overlapping.

The workshop made an indicative list of positive values which were significant and directly linked to science education. Such listings has been attempted in the participating countries.

The focus of the list is on personal and social conduct.

Values education needs to prepare individuals to take decisions whenever a conflict situation arises before them. The decision should invariably be weighed in favour of rightly deserving values.

Character building should be of a practical nature implying thereby determination on the part of the individual to pursue the right kind of values even in the face of difficult and adverse situations. Towards this, the school curriculum, learning-teaching strategies, and teacher preparation programmes would need a fresh look. The list prepared by the workshop gives indications for these.

The curriculum concerns of each nation are governed by the needs of society and individuals. These needs are changing fast and the curriculum is expected not only to meet the present needs but also to prepare the learners for the future. They may then be seeing still greater changes and would have to be equipped to absorb these and contribute their own effort as well. Most of the countries have redefined their curriculum concerns in the recent past. Some of these have completed more than one cycle of curriculum renewal and development. The teacher training programmes have also undergone significant changes. Adequate priority and weightage are being given to working with the community, skill development, vocational education and education in physical, moral and spiritual development. The emphasis on values education has emerged clearly, and mainly centres around national goals, universal perceptions, ethical, moral and spiritual considerations with particular focus on character building.

Values education could be viewed as having a corrective component which would link it to the elimination of obscurantism, fanaticism, violence, superstition, exploitation and injustice. The extent of emphasis on this component could vary in each country. There could also be a prospective component, and include values like honesty, truthfulness, courage, conviction, tolerance, love for justice, compassion etc. The workshop stressed that the school curriculum can no longer ignore the major global issues facing the world today and those which are likely to confront humanity in the near as well as the distant future. Several of them are as significant as national issues. The learners have to be made aware of the issues like peace initiatives, peaceful uses of nuclear energy, protection of culture and environment, prevention of violation of human rights, equality of others etc. They also, in this context, need to perceive themselves as members of a global community of mankind. As an example, the need for protection of the environment and natural resources in the immediate neighbourhood of the learners could help them perceive gradually the wider implications of global efforts to save the environment. One of the major thrusts of the school curriculum would be to prepare the learners to respond adequately to the need for adopting a scientific outlook. Science curricula provide opportunities to develop the qualities of open mindedness, commitment to face enquiry, habit of seeking more evidence before arriving at conclusions. It makes learners revise their assumptions and hypothesis based on fresh evidences that may come to light. It also helps in the acquisition of work skills, formation of appropriate work ethics and work habits. It moulds attitudes. The learners develop interest in the processes of science and are able to identify areas of their interest. This gets closely linked to respect for work, productivity consciousness, and creativity. Devotion, commitment and sincerity become necessary ingredients.

Another aspect that deserves attention in developing the curriculum of science in the context of values formation is the fact that science searches reality or truth. The value of truth is the value of science. As the value of truth is an all encompassing value, the direction it provides to applications of science has to be ethical and moral, correct, justifiable and acceptable. The scientists and technologists who contribute to industrial and technological changes and developments need to have some inherent qualities. These include relentless desire for the search for truth, capacity to analyse, interpret, courage to dissent from the accepted explanations with necessary respect for the earlier contributions and willingness to present their own ideas, interpretations and analysis before others. Sense of humility and consideration for the good of humanity need to be all persuasive considerations. These qualities and considerations generate new ideas, and induce new thinking. Conditions are also created which demand reorientation of old values as a consequence of reinterpretations of new facts and findings.

The specifications of learning objectives of science subjects at the secondary stage frequently contain the following:

a) acquisition and understanding of knowledge of terms, facts, concepts, definitions, principles and processes;

b) development of relevant skills;

d) appreciation of the contribution of the particular subject area to scientific and technological developments and human happiness;

e) development of interest in the happenings of the scientific world; and

In the present context, objectives pertaining to appreciation, interest and attitudes are relevant. While dealing with each particular topic it is possible to identify the situations where these could be formed, developed and strengthened. Without going into the specific subject units, the workshop attempted to list below some of the possible specifications of the objectives in these areas, together with a list of how teachers may facilitate and help in their achievement.