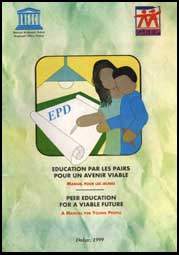 Youth and creativity in EPD

When the sun was at its zenith
You invaded my compound
Stole my belongings
Left me homeless
When I was working in the fields
You have besieged my village
Disregarding the misfortune of its inhabitants
Condemning my good traditions
Revolted you made it to me
Revolted I could not be
Before the disaster you caused
And the view of such distress
Suffering has taken the place
Of love in my heart
For seeing you submerge the inhabitants so often
Sea! Sea! Sea! What can we do for you to stay where you belong?
Listen to the cry of distress of the populations
Answer to our calls, tell us what we have to do.

«United in hope we can win AIDS»

My first concern is you, AIDS
Danger for my life
Danger for my race and my social class
Your empire is so large and powerful
But my kingdom will win one day
Just like it has often did with those like you
We have abstained and we were faithful
And were one of the targets of the EVF clubs
But you continuously ruin my people
When I heard you were in America
I have circled my beloved Africa with a wall
Like the one in Berlin
After you passed through the doors of Africa
Union seems to be the only force to destroy you
Once our partners,
Our brothers and sisters unite in hope,
The Lord will light for us the path leading to victory upon AIDS

O youth! Don't you ever dream
Of a better world than the one you live in?
A world of happiness in which man masters the demographic burden,
A world in which the environment is sound
A world in which all the qualities of life are brought together?
Yes, of course you do
To make your dreams come true
You should wake up
Open your eyes
Join your efforts and commitment of youth
Against the rapid growth of the population
Say NO to the deterioration of the environment
Have an attitude which is favourable
To your well being
Which preserves the life of future generations
To make your dreams come true.

Complaint of a tree which survived deforestation

Assane was a poacher specialised in elephant hunting. Like most of the people eager to get ivory he spent all his time looking for elephants which were more and more difficult to be found in the forest.

One day, the oldest elephant named Gorgui decided to stop his criminal acts before he kills them all. With his aim in view the old elephant set off. When they met, the poacher aimed his gun at Gorgui who transformed himself into a young and beautiful lady and said to Assane:

«Why do you keep going at elephants»

Hypnotised the poacher stepped back shuddering.

Gorgui went on: "You value your life and we too we value ours. So why do you want us to disapear?

Upon which the reckless poacher made off and all the chased him until he run out of the forest.

The Youth and drugs

There was in a Senegalese village an 18 year old girl, courageous and simple who loved to study. Her name was Rose Mane. She lived with her father and was his only child. Her father gave her a traditional upbringing and she would take no stimulant and not go out after 8 PM. She was then very happy. After she passed her baccalaureate exam her father sent her in town to pursue her studies.

In town she met Jean, a jobless 19 years old boy who going to change her life. Soon after they met, Rose Mane stopped going regularly to her courses and started going to night clubs and worse she started taking drugs little by little.

Rose Marie and Jean would take daily great quantities of all sorts of drugs. As Jean did not have the means for it, she would use all the money her father sent her for her studies and sell all her belonging to buy the drugs.

Rose Marie will say often that: since I have started taking drugs I felt as if I was no longer part of this world, but when I stopped or did not have enough I would feel nauseous and not stand myself anymore. I would suffer from withdrawal symptoms."

Being regular drug takers themselves, Jean and Rose Marie ended up being slaves to drugs.

When Rose Marie's father discovered what his daughter was doing in town he stopped sending her money. So Rose Marie was forced to prostitute herself and Jean to steal for them to pay for their dose. This new way of life had sad consequences. Rose Marie got AIDS and Jean will stay in jail for the rest of his life. What a sad fate for these two young people.

Fatou was very clever student in JSS 3. She was always concerned with her studies. But when she was at puberty she thought she was superior to everybody. She would go dancing every day and did not care anymore for her studies because her work has deteriorated. Because the principal did not bear her attitudes anymore he called for her mother and explained the situation to her. Back home her mother advised her and even threaten to throw her out of the house if she did not listen but she did not stop doing the same stupid things again and again. Her parents have tried to every thing to stop her but unfortunately she did not follow their advises. Eventually with the numerous partners she had, she became pregnant. Her father stopped taking care of her and her mother was too poor to take over. Unluckily she could not find the father of her child. When she accused Tapha he said she never accepted to make love with him. Moreover she had a caesarean at delivery.

Fatou has ever since become the most serious girl in her area.

(The words to be found and their definitions are in French. Please try to make your own, using the word deforestation for example. Solutions page 55)

My first is a possessive pronoun
My second is the favourite dish of most Senegalese
My third is used to tell the age
My whole unites a man and a women.

My first is an object used for playing LIDO
My second refers to a two wheels vehicle
My third refers to the verb to pay in the third person singular present tense
My whole is a word which symbolises the improvement of the quality of life.

My first is the colloquial term of dish ("mets" in French)
My second is the house the birds build
My third is the verb to do in the third person singular past historic tense
My fourth is synonymous with problem
My fifth is the 3rd syllable of what cause the greenhouse effect
My whole provides the well-being to the family.

Words EPD to be circled)