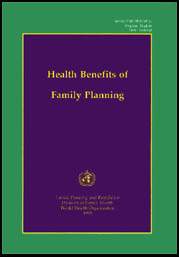 Anaemia A disease in which the blood gets thin for lack of red blood cells. Signs include pale skin and lack of energy.

Eclampsia A potentially fatal condition in which a woman with pre-eclampsia (see below) develops convulsions.

Hepatitis A viral infection that harms the liver. Hepatitis increases the risk during pregnancy of liver failure and death.

Infancy The period of time from birth to one year of age.

Lactational Amenorrhoea Method (LAM) A postpartum method of family planning. If a woman is amenorrhoeic, fully or nearly fully breast-feeding day and night, and less than six months postpartum, she is 98 percent protected against pregnancy.

Obstructed labour A problem that occurs when the space in the bony birth canal of the mother is either too small or too distorted by disease to permit easy passage of the head of the baby during labour. If the condition is not dealt with in early stages of labour, obstruction can result in death of the mother through infection and exhaustion, and death of the fetus through infection, birth injury, and lack of oxygen.

Pre-eclampsia A serious condition that sometimes develops during pregnancy characterized by development of high blood pressure, protein in the urine, and swelling of the feet, hands, and face. Also known as toxaemia.