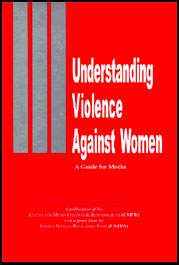 I. Women’s Rights are Human Rights: Understanding Violence against Women

UNTIL very recently, the concept of “human rights” rarely applied to women. Though one of the few moral visions subscribed to internationally, human rights has been historically related to civic-political rights, to the rights of an individual confronting the powerful state. But in many countries, cultural constraints prevent women from exercising or even enjoying their civic and political rights. Which may explain why women’s rights are not commonly classified as human rights, since women have been largely absent from, or have remained unrecognized within, the arena of armed and political struggle. The dominant image of the political actor in our world is male.

Many violations of women’s human rights are distinctly connected to being female - that is, women are discriminated against and abused on the basis of gender. Feminists redefine human rights abuses to include the degradation and violation of women.

If a male activist, for instance, were to be held in prison without charges, incommunicado from friends and supporters, his incarceration would be immediately recognized and denounced as a human rights violation. And yet millions of women in many places in the world are confined to their homes, and not allowed to seek employment or consort with male strangers, with the practice condoned in the name of culture and religion.

On the local front, a study made of all the admissions of battered women and children to the emergency wards of government hospitals with women’s desks revealed that in the same one-month period, the number far exceeded the number of children who had fallen ill of cholera. And yet, as former Health Secretary and now Senator Juan Flavier pointed out, the cholera epidemic received far wider publicity and raised much more concern among policy-makers. Domestic violence has clearly become a major public health concern. But it is largely ignored, if not trivialized. Why?

Charlotte Bunch, a feminist lawyer who was instrumental in promoting the concept of “women’s rights are human rights” at the UN Human Rights Conference in Vienna in 1993, has declared that “the specific experiences of women must be added to traditional approaches to human rights in order to make women more visible and to transform the concept and practice of human rights in our culture so that it takes better account of women’s lives.”