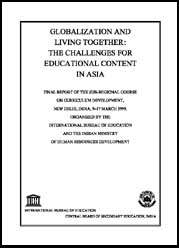 The development and reform of school curricula is an ongoing preoccupation for educational authorities in all countries. The approach of the new millennium has given new urgency to efforts by governments to provide all citizens with access to quality education, at least for the basic level, while improving and widening access to secondary education. More than ever before, governments are being called upon to equip children and young people through education with the capacity to lead meaningful and productive lives in a world of bewilderingly rapid and complex change. Existing curriculum content and pedagogical methods are increasingly being called into account, as pupils leave schools ill-prepared for the world of work and adulthood, unready and unmotivated to carry on learning throughout their lives. The meaning and role of education, of teaching and learning, are constantly being redefined in an effort to meet the real needs and demands of individuals and society.

The implication of globalization for societies around the world is at the heart of present concerns to improve and upgrade education systems. While globalization is often defined primarily in terms of its economic dimensions, the Report to UNESCO of the International Commission on Education for the Twenty-first Century - the Delors report - sees the most important consequence of this complex phenomenon to be its socio-cultural and ethical dimensions as regards the growing interdependence and interrelationships between peoples and cultures the world over: ‘the far-reaching changes in the traditional patterns of life require of us a better understanding of other people and the world at large today; they demand mutual understanding, peaceful interchange and indeed harmony’.1 However, the report stresses that ‘learning to live together’ - one of the pillars of education - will only occur through the possession of self-knowledge and understanding, and appreciation of one’s own origins and culture.

1 Delors, J., et al. Learning: the treasure within. Paris, UNESCO, 1996, p.22. (Report to UNESCO of the International Commission on Education for the Twenty-first Century.

It is now widely recognized that designing a curriculum is mainly a national concern, normally shared between educational protagonists at the central, local and school level. The principle of subsidiarity suggests that curriculum issues should not be addressed at the supranational level. Indeed, experience shows that, until quite recently, international exchanges and co-operation in curriculum development were limited, being restricted to professional associations of curriculum specialists. However, two recent trends have contributed to bringing international attention to bear on curriculum matters:

1. The globalization of economies and societies raises a new challenge, requiring the adaptation of educational content to meet both national demand and international concerns;

2. The diversification of actors, both national and international, involved in the delivery of education (in particular with the growing use of information and communication technologies - ICTs), as illustrated by the significant share of non-formal education, have resulted in the emergence of new concepts and norms for educational content; as indicated by such terms as the ‘common core’, ‘universal values’, ‘basic life skills’, etc. Once again, this means sharing responsibility for educational content, as well as presenting us with new opportunities for international co-operation.

The IBE programme of co-operation in ‘research and studies’, ‘training and capacity building’; and ‘the exchange of information and expertise’ is based upon two major assumptions:

(a) Although different Member States of UNESCO have very uneven and heterogeneous experiences in the design and adaptation of their educational content, there is room for beneficial exchanges between countries;

(b) Although there are some common views on how to address the demand that content should be modified, a great deal remains to be done to improve the process of adaptation.

The approach to implementing the programme followed by the IBE is based on the assumption that the programme proposes to include: (a) an international platform of information on educational content; and (b) a number of regional and sub-regional co-operation projects. The preparation of such programmes is carried out through regional workshops.

After a first workshop held in 1998 for the Member States of the Mediterranean Region, a second subregional workshop took place in 1999 in New Delhi to cater to the concerns of South and South-East Asia. The purpose of the second workshop was:

(a) To collect information about the status of educational content in the region - a ‘fact-finding’ exercise;

(b) To encourage the assessment of experiences, both among Asian countries and a selected number of countries from other parts of the world; and

(c) To explore and map out some areas for potential cooperation among the participating Member States.

Two key phrases of the IBE’s new programmes were incorporated into the umbrella theme of the course, which was The adaptation of content to the demands of the globalization and the need for learning to live together.

This publication is a compilation of the various presentations made during the workshop. Both through the diversity of topics covered and the list of issues raised, it offers a rich and varied picture of the challenges facing Asian countries seeking to adapt educational content to meet the social demand of the coming decade.

The IBE would like to thank all of the contributors, both from the participating countries and from other parts of the world, who have shared their information and experience during the workshop. Indeed, the distinction between ‘faculty’ and ‘participants’ proved to be of little relevance in this workshop, where all contributors learned from each other.

On behalf of the International Bureau of Education, I would like to express our deep appreciation to the Government of India - and in particular to the Central Board of Secondary Education - for its generous support of the workshop. India both financially supported and hosted the meeting and contributed significantly to the debates and to enriching the information shared among the participants. Finally, I should mention with thanks the financial and intellectual contribution of the Deutsche Stiftung fernationale Entwicklung, which ensured the success of the workshop.