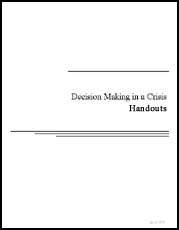 At 5:45 a.m., the dam gave way, flooding all surrounding areas, including Fawnville. Shelters are now open and staffed. Three shelters have a problem with pets. The affected area will be under water for at least 24 hours. The media has just reported that out of the four families that stayed behind, only two made it through the dam failure. The Chairman of the City Council, who has been a political rival of the Mayor, has publicly accused the Mayor of providing inadequate warning and media information to keep citizens safe.

3. What are the needed resources?

4. Are there any ethical considerations at this time?