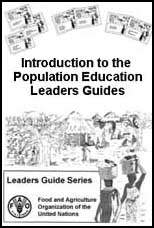 Clearly, a way had to be found to reach out-of-school rural youth. One way in which young people in rural areas do receive information is through the various youth groups and organizations such as scouts, young farmers, religious organizations, 4-H, etc. Working through such youth groups is one way in which informal education and training can take place out of school.

It is easier to reach a number of people through a group than working with them individually. Decisions made by a group are also easier to uphold because of pressure from the group members. For this reason any education campaigns which try to affect attitudes work well through groups. It is very important however that the group leader makes the group feel that what they do is their decision, not something they have been told to do. The leader should always allow the group to discuss ideas and come to their own conclusions.

Some of the leaders guides also make suggestions for small business/income generating activities. Groups provide some security against the risk involved in starting up new ideas - the cost can be shared, different group members can contribute ideas and abilities and confidence is increased through working together in a group. 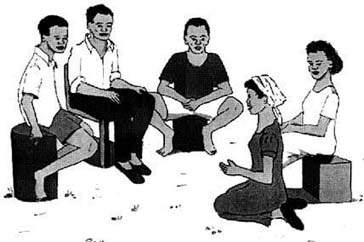 For these reasons, these leaders guides have been developed for work with youth groups.

For population education to be useful to rural people, it must deal with matters of immediate concern to rural families and their villages or communities.

The effect of population changes on entire areas, the whole country, or the world in general are too remote to be meaningful to rural youth. In these leaders guides, population concepts such as the national growth rate, population density, dependency ratio or percentage of unemployment have been translated in terms of individuals, their own families, and their own villages or local communities.

The social, economic or cultural factors that produce population changes are discussed in terms of the behaviour and roles of the learners - the individuals and their families. Similarly, the effects of population change are expressed not from the point of view of the government or nation as a whole, but from that of the rural people - effects on their agricultural production, land ownership, food supply, income, health and other daily concerns.

To reflect the limited schooling of the group the leaders guides are based on oral and visual teaching -learning by doing, rather than on written materials.

It is important to remember that, for the most part, out-of-school youth are a voluntary rather than a captive audience. As such, they may be available for varying periods of time, and they can choose to walk away at any time. The population education activities in the leaders guides have therefore been kept simple, interesting and enjoyable for young people.