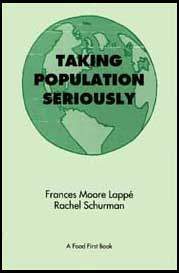 3. Personal communication, January 1988. Cutright is with the Department of Sociology, Indiana University, Bloomington.

5. Julian Simon, "Resources, Population, Environment: An Oversupply of False Bad News," Science 208 (27 June 1980): 1434. According to Simon, productivity will be raised not only through economies of scale and larger markets, but also through the addition of more people's contributions to knowledge and technical progress. See also Julian Simon, The Ultimate Resource (Princeton, New Jersey: Princeton University Press, 1981 ).

15. "Children: A Cost to the Rich, A Benefit to the Poor," The New Internationalist (June 1977): 16-17, cited in Morley and Lovel, My Name Is Today, 34. For more detail on this particular study, see Population and Development Review, September 1977.

24. A recent study of Thailand, for instance, found that large families are increasingly perceived as an economic burden in part because the cost of educating children has risen substantially. See Knodel er al., "Fertility Transition in Thailand: A Qualitative Analysis," Population and Development Review 10, no. 2 (June 1984): 297-328.

38. Charlene Spretnak in "The Population Bomb: An Explosive Issue for the Environmental Movement," Utne Reader (May/June 1988): 86-87.

41. Hartmann's Reproductive Rights and Wrongs, as well as chapter 3 of our own Institute's book, World Hunger: Twelve Myths, are only two of the most recent expressions of this attempt to incorporate a gender-based analysis of power within a larger structural framework.

43. Ralph R. Sell and Steven J. Kunitz, "The Debt Crisis and the End of an Era in Mortality Decline," Studies in Comparative International Develop' meet, 1987, cited in George, Fate Worse than Debt, 134.

53. During this period, an estimated 83 percent of all contraceptive users were sterilized (see Jacobson, "Planning the Global Family," 41).

58. Interview with an Indian researcher who wishes to remain anonymous, August 1987.

60. Betsy Hartmann, personal correspondence. Note also that women tend to, earn less than the average, and few Bangladeshis have steady employment at any wage.

66. S. Surjaningrat and R. H. Pardoko, "Review of Some of the Management Aspects of the Indonesian Population and Family Planning Programme," Technical Report Series of the National Family Planning Coordination Board, Monograph no. 37, Indonesia, 1983, 3.

70. Despite the fact that the Food and Drug Administration has not approved its use, several articles in the New York Times recently reported that Depo-provera is being administered as a contraceptive by the Indian Health Service. Although only 35 Native American women are currently being given the drug, at least 200 were prescribed it in the past. See "Indian Agency Using a Banned Contraceptive," New York Times, 7 August 1987, 8; and "Depo-provera and the Indian Women," Editorial, New York Times, 17 August 1987, 18.

83. These include disruption of the menstrual cycle, headache, depress sign, loss of sex drive, weight change, nausea, and acne. Norplant is also not recommended for lactating women. See Ibid., 197.

86. The proportion of married Mexican women who were sterilized in 1976 was 7 percent; by 1982, it had risen to 29 percent. (During the same period, the use of all other methods fell. ) Note that these figures refer to married women using contraception, not to all women. See Francisco Alba and Joseph Potter, "Population and Development in Mexico Since 1940: An Interpretation," Population and Development Review 12, no. 1 (March 1986), table 5.

87. Alba and Potter, "Population and Development in Mexico," table 5.

88. Lincoln Bergman et al., Puerto Rico: The Flame of Resistance (San Francisco: People's Press, 1977), 117. It should be noted, however, that the government did not establish an official sterilization program until 1974; when it did, the program came under the jurisdiction of the Division of Family Planning in the Department of Health. See Harriet B. Presser, "Puerto Rico: Recent Trends in Fertility and Sterilization," International Family Planning Perspectives 6 (March 1980): 20-25.

99. It is in Kerala that India's first "family planning camps," criticized as extremely coercive, were held in 1970 and 1971. See J. K. Satia and Rushikesh M. Maru, "Incentives and Disincentives in the Indian Family Welfare Program," Studies in Family Planning 17, no. 3 (May/June 1986): 136- 145. Our point, however, is that this effort did not "take" until social conditions were right.

101. Rates of change in Indian fertility were calculated using data provided by Bruce Fuller of the World Bank's Population Division.

106. In the "Social Consequences of the Economic Decline: Mexico," Dieguez refers to a 1983 survey done by Mexico's National Consumer Institute, which shows a significant decline in the consumption of oil, meat, sugar, eggs, beans, fruits, legumes, milk, bread, and fish. Not surprisingly, these declines were concentrated among the poorest house-holds.

107. The Thai-American Project, "The Role of the State in the Problem of Malnutrition Among the Children of Thailand" (Unpublished paper, Santa Monica, California, February 1986), 2.

111. The total fertility rate for India is now about 4.5 children per woman. The 25-year period referred to is 1960 to 1985. Data from the World Bank's Population Division.

114. World Bank, World Development Report 1987, table 27. Note that we've included Cuba in this list of 74 low and lower-middle income countries because it was so classified for the first period of our time series. Only in recent years has the World Bank reclassified Cuba as a "nonreporting nonmember economy." Also note that countries of a million or less in population are excluded from the bank's statistics.

115. Statistically, twos other countries might he included in this group: El Salvador and Mauritius. The first we exclude because its slow growth results from out migration and disruption and death from war. The second, an island whose population only recently passed a million, is so dissimilar to the other countries as to make meaningful comparisons impossible. Data on growth rates are from the World Bank's World Development Report (1984 and 1987) and represent averages for the 1980-85 period. Total fertility rates also come from the World Bank and were provided to us by Bruce Fuller of the bank's Population Division. We use total fertility rates instead of crude birth rates because the former should not be affected by shifts in the size of the cohort of women who are of childbearing age that could occur over a 25-year period.

116. According to the Indian Census, the population growth rate of Kerala averaged 1.8 percent annually between 1971 and 1981 (Census of India, Kerala State, part 2A, statements 3 and 8, pp. 28 and 32). Interview with Dr. K. C. Zachariah at the World Bank, Population and Human Resources Division, April 1986.

122. Ibid., C-13. Since the 1970s, the food consumption of the lowest income groups has fallen both in quantity and in quality (less dried fish and beans).

124. Ibid., 92. In 1983, in fact, the Organization of American States reported that Cuba ranked second in Latin America in per capita food availability.

133. This may well explain the apparent rise in female infanticide in China since the 1979 change in policy. See "The Threat of Population Growth," World Press Review (August 1987) 59.

135. Personal communication with demography professor Alberto Palloni at the University of Wisconsin, December 1987. Another explanation of the decline in Chile's fertility offered by Dr. Palloni has to do with the strong European influence which still exists in Chile today. According to Palloni, this European influence has led to a relative openness in attitudes towards contraception.

136. Note that the Pinochet government's economic policies were originally designed and overseen by conservative U.S. economist Milton Friedman and his "Chicago boys," as they are colloquially known. For more on these policies, see Elton Rayack, Not So Free to Choose (New York Praeger, 1987) and Alejandro Foxley, Latin American Experiments in Neo-Conservative Economics (Berkeley: University of California Press, 1983)

138. Interview with T. Paul Schultz, an economist and population specialist at Yale University, May 1986. Studies documenting the reduction in fertility associated with women's education abound.

141. Thailand's population growth rate during the 1960s averaged 3.1 percent per year, implying a 27 percent decline over the last 2 decades.

142. U.S. Agency for International Development, Women of the World: A Chartbook for Developing Regions, Asia (Washington D.C.: Bureau of the Census, 1985) 33-34.

145. Chayan Vaddhanaphuti and Martha Winnacker, "Old Cash Structures and New Crops," Southeast Asia Chronicle 86 (October 1982): 3-9, esp. table 3. Also see M. Muceke, "Make Money, Not Babies"; Knodel et al., "Fertility Transition," 302; and Hartmann, Reproductive Rights and Wrongs, 7. It should be noted, however, that the impact of increased landlessness could just as well have the opposite effect, i.e., of stimulating fertility. While growing landlessness may lessen the need for extra farm hands, it can simultaneously increase a family's need for income earners, since more food must now be purchased.

148. The average contraceptive prevalence rate for Guatemala, El Salvador, Honduras, and Nicaragua combined is 22 percent. Also note that Costa Rica shows the highest contraceptive use of 28 countries classified as having weak family planning program efforts, and a higher rate than 16 countries with moderate family planning efforts, with the notable exception of Cuba (see Lapham and Mauldin, "Contraceptive Prevalence, " 123, table 1).