Role of STD on HIV Transmission

Although the probability of HIV infection through sexual contact varies greatly, it appears to be lower than that of infection through other routes of exposure (see Figure 1).7 The variability among and within routes of HIV exposure depends partly on the viral dose and also on whether the virus is transmitted directly into the blood or onto a mucous membrane. 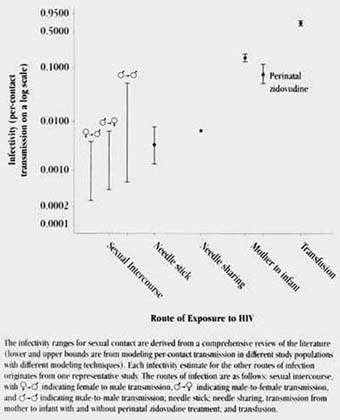 HIV infectivity is the average probability of transmission to another person after that person is exposed to an infected host. Infectivity plus two other parameters — the duration of infectiousness and the average rate at which susceptible people change sexual partners — determines whether the epidemic grows or slows. On a population level, all three corners of the classic epidemiologic triangle — susceptibility and infectiousness, the social, cultural and political milieu, and HIV type — determine HIV infectivity.

The development of syndromic management guidelines and other efforts to improve STD management and prevention at "points of first encounter" with the health system were prompted by the rapid spread of the HIV/AIDS epidemic. One reason for this new attention to STDs is obvious: the sexual behaviors that lead to STDs also promote the spread of HIV. However, early in the HIV/AIDS epidemic, results of epidemiological and laboratory research suggested STDs actually enhance HIV transmission, both infectiousness and susceptibility. Given this evidence of a link between HIV and other STDs, the AIDSCAP project of Family Health International made improving STD prevention and treatment one of its main HIV prevention strategies when the project began in 1991.

Critical to the development of optimal strategies for HIV control is understanding the role of other STDs in the transmission of HIV, the role of STDs in the progression of HIV disease, and the role of HIV infection in alterations of natural history, diagnosis, or response to therapy of STDs. Of 75 studies conducted on the role of STDs in HIV transmission, 15 analyses of clinical examinations or laboratory evidence of STDs, adjusted for sexual behavior, showed that both STDs that cause genital ulcers and non-ulcerative STDs, such as gonorrhea and chlamydia, increase the risk of HIV transmission approximately three- to ten-fold. Preliminary data from 83 reports on the impact of HIV infection on STDs suggest that, at a community level, HIV infection may increase the prevalence of some STDs (e.g., genital ulcers). If co-infection with HIV prolongs or augments the infectiousness of individuals with STDs, and if the same STDs facilitate transmission of HIV, these infections may greatly amplify one another. This "epidemiological synergy" may be responsible for the explosive growth of the HIV pandemic in some populations.8

The results of several important studies have confirmed the validity of the HIV prevention strategy to improve STD prevention strategy to improve STD prevention and treatment. In a landmark pilot study in Mwanza, Tanzania,9 use of the syndromic approach to STD treatment that AIDSCAP and the WHO had advocated worldwide reduced HIV incidence by 42 percent. The objectives of the community-based randomized intervention trial were to establish a program based on syndromic management for the improved diagnosis and treatment of STDs in the general population, and to measure the impact of this intervention on the incidence of HIV infection and on the prevalence and incidence of STDs. The improved STD services, which decreased HIV incidence by 42 percent over a 2 year period, were designed to be feasible rather than optimal, were integrated with the Tanzanian primary-health-care system, and were based on syndromic treatment algorithms as recommended by WHO.10

Because this observed reduction occurred in both sexes, and was observed consistently in all matched pairs of study communities, and in the absence of sexual behavior change, the most plausible explanation for these results is that the STD treatment program reduced HIV incidence by shortening the average duration of STDs, thus effectively reducing the probability of HIV transmission.

Recent research in Malawi11 and Cote d'lvoire12 produced strong biological and epidemiological evidence that STDs are associated with higher HIV infection rates and that STD treatment can make HIV-positive men less infectious. In the Malawi study, HIV-1 seropositive men with urethritis had HIV-1 RNA concentrations in seminal plasma eight times higher than those in seropositive men without urethritis. After the urethritis patients received antimicrobial therapy directed against STDs based on syndromic management, the concentration of HIV-1 RNA in semen decreased significantly. These results suggest that urethritis increases the infectiousness of men with HIV-1 infection and that this infectiousness can be reduced with prompt and effective treatment.

And finally, in a large epidemiologic study conducted in Cote d'lvoire,12 among more than 1,000 sex workers, the rate of HIV was between 2 and 5 times greater in those women who had at least 1 STD (gonorrhea, chlamydia, trichomoniasis, syphilis, chancroid) compared to those women who had no STDs found.