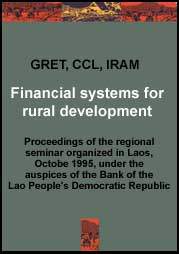 5. Should credit be granted to all social categories?

Due to their requirements for guarantees and the minimal size of their credit, banks exclude a large part of the population. Should the projects and NGOs offer credit to all social categories or should they only target a fraction of the population?

Why are we witnessing the appearance of projects or structures that are especially For women?

In the cities, where women have businesses or other small processing activities, it is not as difficult to go to the bank or at least to get credit.

However, in rural areas, it is much harder for women to have access to a financial service. The steps for having access to credit do indeed pass through committees in which women are generally poorly, or even not, represented. It is therefore harder for them to defend their projects.

In addition, women request small loans, whereas men often apply for major loans. Yet, as small loans are more costly than large ones in terms of management, the credit structures prefer managing a few large ones rather than several small ones. They are thus excluded right from the start, whereas their repayment rate is generally better than that of men (in a project in Malaysia, over a two-year period, the repayment rate for women was close to 97% whereas the men's was 55%).

This is the reason why some operators target their projects for women. It should also be noted that in many countries, the Women's Association is often a dynamic, countrywide association which makes contacts easier.

Credit for the Poor

The choice of offering credit to specific customers involves developing credit formulas, procedures and guarantees adapted to each type of customer. Selection methods or criteria also need to be defined.

We have seen two examples of systems targeting specific customers

- The COOPECs which, through compulsory savings, target a rather well-off population(as they have capital).

- The Bank for the Poor, for which the Vietnamese authorities target a fraction of the population that they had not succeeded in reaching with the Vietnamese Bank off Agriculture.

In the COOPECs, a provision establishes the selection, and for the Bank for the Poor a set of criteria is used.

It is not easy to target poor farmers. It can lead to manipulations with some people managing to be on the list to obtain credit at preferential rates. This also requires regular monitoring of the families in order to update the lists from one year to the next, since standards of living can vary quite rapidly.