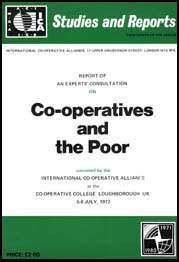 An Experts' Consultation on "Co-operatives and the Poor" was held at the Co-operative College, Loughborough, U.K. on 5-8 July 1977. In convening the consultation, the ICA was aware of several factors which made it timely to arrange a discussion on the subject by a group of experts chosen carefully both from within and without the co-operative movement.

During recent years a number of agencies have examined different aspects of the performance of co-operatives including their suitability in catering for the needs of the poor. Assessments have differed and while this is to be expected, it has been the feeling in certain quarters that sometimes the assessment has been vitiated by a lack of understanding of the principles and objectives of the co-operative movement. At the same time, the "trickle-down" theory of development, current in the fifties and the sixties, has been seriously questioned as it was evident that resources introduced at the top of the social and economic structure were often not reaching the poor. From this disillusionment with the uses of international aid came an examination of the institutions which were intended to combat poverty. Moreover, the Secretary General of the United Nations, in his report entitled 'The Role of the Co-operative Movement in the Achievement of the Goals and Objectives of the Second United Nations Development Decade' (Ecosoc E/4807) had requested that an expert group meeting be held to "... assess the problems connected with the participation of the poor in the co-operative movement... (and)... to review the experience gained in particular countries on particular issues and to recommend appropriate strategies and programmes."

This is the Report of that consultation. The debate on the subject is an evolving one and it is, therefore, understandable that the Consultation did not reach firm conclusions on every issue. These disagreements are reflected in the Report. I sincerely hope that the Report will be read and discussed widely. Although the views are not necessarily those of the ICA, I feel that the Report makes an important contribution to the debate, and will have important implications for the practical policies of national co-operative organisations as well as those international agencies which are involved in assisting co-operative movements in the developing countries.

Many individuals and organisations have helped in the consultation in various ways and I would like to thank the following in particular: Mr John Tomlinson MP for inaugurating the Consultation; Mr R. Hewlett, Executive Secretary of COPAC, and Mr H. Morsink of the United Nations for their effective contribution to the work of the Preparatory Committee; Dr R. L. Marshall, OBE, for his Chairmanship of the meeting; the Rapporteur, Mr R. Savary who is largely responsible for the Report; the staff of the U.K. Co-operative Union, especially those at the Co-operative College, Loughborough. Financial and other assistance was received from the following organisations: the Co-operative Union of Canada (CUC), the Canadian International Development Agency (CIDA), The Norwegian Co-operative Union and Wholesale Society (NKL), the Norwegian Agency for International Development (NORAD), the Swedish Co-operative Centre (SCC), the Swedish International Development Authority (SIDA), the U.K. Ministry of Overseas Development (ODM), the U.K. Co-operative Union Limited, and the National Federation of Consumer Co-operatives, France (FNCC). I would like especially to mention the two Consultants, Dr U. Lele and Dr A. F. Laidlaw. They all deserve our warmest thanks.

Finally, I would like to thank my colleague, Graham Alder, our Development Officer, and his Secretary, Christine Griffin, for assisting on all aspects of the consultation; and to our Secretary for Press and Public Relations, Dr Hanns Ollman and his Assistant, Mrs M. Blindell, for preparing the report for the press.