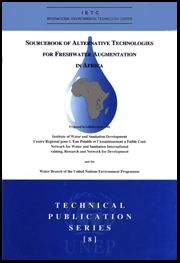 Zimbabwe covers 390 000 km2 in area, and has a population of 10.4 million people (CSO, 1992), of whom 74.3% (or 7.73 million) are rural (CSO, 1989). The country is situated in southern central Africa between latitudes 15° 30' and 22° 30' South and between longitudes 25° 00' and 33° 10' East. The country falls into various land use (agro-ecological) zones determined by rainfall, temperature and soil types as shown below. The country has a seasonal rainfall pattern, which varies across the country, with the highest rainfalls of over 2 000 mm falling in the Eastern Highlands and the lowest rainfalls of around 400 mm falling in the low areas, particularly along the area bordering South Africa. In the middelveld, the rainfall varies from 700 to 1200 mm. Runoff is generally 8% of the mean annual rainfall (DWD, 1980). The majority of rivers are non-perennial. An attempt to fully utilize this runoff has led to an extensive dam construction programme. While these reservoirs are used as sources of water for mainly urban centres, some supply water for irrigation and mining purposes.

The majority of Zimbabweans live in the communal and resettlement areas where they rely on agriculture for a living. Commercial agriculture is a major contributor to the country's economy.

The country, therefore, is heavily dependent on agriculture, and, as a result of recent droughts, precipitation augmentation has become a vital component of this economic sector.

Rainfall augmentation operations are carried out during all seasons which do not have sufficient natural rainfall.

This technique involves the beneficial modification of summer convective rainfall to increase rainfall production efficiency. Only about 30% of the atmospheric water vapour entering the region's storms naturally reaches the ground as precipitation (McNaughton, 1980). The approach encourages efficient rainfall formation through a collision - coalescence process which is enhanced or accelerated by the addition of hygroscopic nuclei into a storm updraft at cloud base. Augmentation provides additional water to crops when weather conditions are favourable and is required during periods when little or no rainfall would otherwise occur.

In Zimbabwe two methods of cloud seeding are used:

(a) The high level seeding method which has been used since cloud seeding was first practised, and which involves flying into the top of a suitable cloud and injecting it with silver iodide.

(b) The low level seeding method which is experimental and involves burning flares which emit hygroscopic smoke material into the base of a cloud.

This technology is described in Part B, Chapter 1, "Agriculture."

Major equipment requirements are aircraft, radar, materials and skilled personnel. In this instance, the aircraft were supplied mainly by the farming community, with the government paying for their use, with some additional aircraft supplied by the government. One problem was the shortage of aircraft. The numbers of aircraft were hardly enough for a comprehensive aerial coverage.

Aircraft and personnel are on standby during the rainy season, waiting for the right clouds/conditions. The main rainy season in Zimbabwe is from November to March. Rain sometimes falls in other months, mainly September, October, April and May, and, during the rainy season, there are spells of completely dry weather. Therefore, an operational cloud seeding organisation would normally be inactive on about half of the days in the rainy season, including occasions which are too wet for additional rainfall to be required.

The private sector, in particular the fanning community, assisted governmental implementation of this technology, mainly with aircraft. Thus, in this application, there was a high degree of community involvement, but this could vary in other applications.

It was observed in Zimbabwe that the cost of cloud seeding was significantly less than the resulting benefit from the maize yield alone. This analysis did not take into account other crops or non-agricultural benefits. Hence, cloud seeding is considered to more than pay for itself (McNaughton, 1980).

In Zimbabwe, the extra maize yield from the national cloud seeding programmes in the late 1970s was estimated at between 0.5% and 1% of the national total (McNaughton, 1980). Pastures and grasslands also benefited. Further, seeded rainwater was determined to be cheaper than piped water with respect to irrigation ($0.12/km3 versus $1.76/km3; McNaughton, 1980). Extra benefits accruing from the cloud seeding programmes included: (i) fog and stratus disposal around airports; (ii) hail suppression; and, (iii) cyclone (hurricane) modification.

Experimental operations are costly, often requiring the simultaneous use of three aircraft - one for seeding, a second to monitor weather conditions (such as cloud top temperatures during the five to ten minutes after seeding), and a third to measure precipitation at the cloud base in a rain collector. Cloud-seeding operations/aircraft have to select suitable clouds as they arise. This selection cannot be controlled or easily predicted in the long term. Therefore, it is difficult to supply water when and where it is required. Also, chartered aircraft are expensive to operate from the point of view of standing charges.

Currently the Zimbabwe cloud seeding fleet has aircraft based in Harare and the Lowveld. Depending on the occurrence of potentially suitable clouds during the height of the wet season, additional aircraft should be made available during January or February. If maize is planted in December, it is recommended that at least one aircraft should be on standby until late April. While jet aircraft can cope with larger numbers of clouds, and, therefore, reduce the number of cloud seeding aircraft required, these aircraft are more expensive to operate. There is also a need for a daily radiosonde data in areas with a high suitability for cloud seeding during this period, and a need to carry out further experiments with reference to the atmospheric conditions which permit cumulus development.

McNaughton, D.L. 1980. Cloud Seeding in Zimbabwe and Some of its Effects on SR52 Maize Growth. PhD Thesis, Faculty of Agriculture, University of Zimbabwe, Harare.