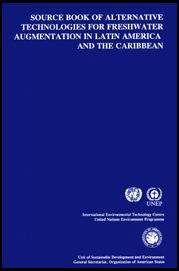 Growing demands for water and the increasing costs of water supply are resulting in a need for countries to maximize the use of their existing water supplies and make use of hitherto unexploited freshwater resources. Numerous techniques, modem and traditional, for improving the use, and augmenting the availability, of water resources have been developed and implemented in different parts of the world. These include, among others, wastewater reuse and recycling, desalination, and rainwater harvesting. In many developing countries, the application of these technologies has been limited by lack of information on the approaches available and how well they work.

In Latin America and the Caribbean, even where rainfall is abundant, access to clean water has been restricted by the contamination of water resources, the lack of adequate storage facilities, and the absence of effective delivery systems. In the Caribbean, many small island states also face severe constraints in terms of both the quantity and the quality of freshwater due to their particular geographical, geological, topographic, and climatic conditions.

To provide the basis for such informed choices, the United Nations Environmental Programme (UNEP), in cooperation with the Unit of Sustainable Development and Environment (USDE) of the General Secretariat of the Organization of American States (OAS), undertook the Project on Alternative Technologies for Freshwater Augmentation in Latin America and the Caribbean. An agreement to execute the project was signed by the two organizations in May 1995. UNEP is represented in the project by the Water Branch, located in Nairobi, Kenya, and by the International Environmental Technology Centre (IETC), in Shiga, Japan.