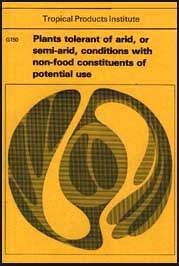 In recent years there has been considerable interest in using more productively the renewable natural resources of the arid and semi-arid zones which make up almost 40 per cent of the Third World’s land surface (Miegs, 1953; Paylore and Greenwell, 1979; UNESCO, 1979). This report is an attempt to bring together basic information concerning plants which are reported to tolerate arid, or semi-arid, conditions and which have, or might have, potential as raw materials for industrial, i.e. non-food, use.

The information has been presented in tabular form for convenient reference. The resulting tables list alphabetically 298 species which have been reported by various authors, (for example, Arnon, 1972; Chopra et a/., 1960; Cruse, 1949, 1959, 1973; Duisberg and Hay, 1971 and Krochmal et al., 1954) to tolerate arid, or semi-arid, conditions and which yield one or more of the following commodities:

(i) Essential oils, for use in flavourings, fragrances, etc;

(iv) Gums and resins, for use as adhesives, but including those which may be used in foodstuffs;

(v) Latexes—for use as substitutes for Hevea rubber and as sources of hydrocarbon fuels;

(viii) Pharmaceuticals—particularly as a source of established drugs or their precursors;

Generally food and forage uses have been excluded although such uses are occasionally mentioned where it seems appropriate to do so. In addition, although firewood continues to be the most important source of fuel for cooking and heating in most Third World countries and its collection in sufficient quantities one of the most pressing daily problems in arid areas and one of the major reasons for their devegetation, little emphasis has been accorded to firewood sources in this report as it was known that a detailed compilation by the National Academy of Sciences in the USA was being undertaken. The compilation was published (National Academy of Sciences, 1980) and those species mentioned therein, but which had not been included in the preliminary draft of this report, have been added, but without comment and denoted by the suffix f.

The headings used in the tables are largely self-explanatory but the following comments may be appropriate. In the first column the botanical nomenclature used follows closely the Index Kewensis and its Supplements and only the more common vernacular names are given. Information given under columns three and four, Potential and Constraints can be considered as positive or negative attributes applicable to each listed species and its possible exploitation in the future. Where a large number of species have certain properties in common, for example the Euphorbias, Opuntias and Yuccas, their common aspects have been drawn together in the form of general notes rather than repeated under each individual entry.

In all entries only a few key references have been quoted in an attempt to keep the numbers manageable. Nevertheless, the reference list which constitutes the second section of the report should prove a valuable bibliography for the many technolgists, scientists and economists who are interested in developing the plant resources of the arid and semi-arid regions.

The report should be regarded as a working document rather than a final definitive work and it is hoped that it will be of value in the following ways:

(i) as a convenient assemblage of data on each of the species listed;

(ii) as a means of identifying gaps in knowledge and hence indicating the possible direction for new research;

(iii) as a basic document from which it may be possible for scientists, technologists, agriculturalists and economists to select a proportion, say 1 in 10, of the species listed as being worth exploring further.