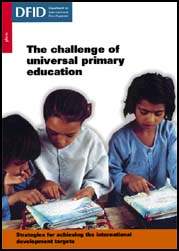 Achieving the targets: the scale and geography of the challenge

2.1 Reliable data on school enrolment are not universally available15, but the Education for All 2000 Assessment16 estimates that 113 million children, 60% of them girls, are not enrolled in school. Over 40 countries report net primary enrolment rates of below 80% (Annex 1). Indicators of school attendance, retention and attainment are even more difficult to obtain, but it has been estimated that in sub-Saharan Africa, one third of children enrolled in primary school drop out before reaching the fifth grade17.

15 There are confusing discrepancies between education statistics presented for countries which it has not been possible to avoid in this paper. The UNESCO Institute for Statistics has the international mandate for collecting and disseminating education data. Other international bodies present some data from their own sources and sometimes use different definitions, for example on primary school age boundaries, regional groupings and the estimation of missing data. In addition, the figures supplied by member states to UNESCO for the Education for All 2000 Assessment do not fully correspond with other national data. In particular, in some cases, the population estimates they give differ significantly from the population estimates produced by the United Nations Statistical Department which are otherwise routinely used.

2.2 Despite the question mark over the validity of the data, it is clear that the magnitude of the challenge of UPE is greatest in sub-Saharan Africa, where net enrolment rates are lowest (61%) and 42 million of the 113 million out-of-school children live, and in South and West Asia with 47 million (Figure 1). Africa also faces a large projected increase in primary school age population (37%18) between 1998 and 2015, while a stable demand for education is expected in Asia (Figure 2). In both regions, there is a strong correlation between low enrolment and the incidence of poverty.

18 All projected changes in population are from the ‘medium variant’ in the UN’s World Population Prospects: the 1998 Revision. They project recorded trends in fertility and mortality. The projections also take account of estimated and projected levels of HIV/AIDS prevalence in countries and make assumptions about the impact this will have on the size of population.

2.3 In sub-Saharan Africa, population growth and an increase in the proportion of the population which is very young and economically dependent, set a daunting demographic challenge. Governments are faced with the problem of educating an ever-growing school population within tightly constrained budgets. To achieve UPE will require major and sustained increases in enrolment, year on year, akin in some countries to the rapid expansion that took place in the post-independence years of the 1960s. Maintaining progress will be a major task, unless fertility rates, in part a consequence of a failure to retain girls in school, fall substantially in the early years of the new millennium.

2.4 In South and West Asia, while there are still nearly 50 million children out of school, primary enrolment is approaching 75%, and the demographic picture is less daunting. In India, for example, the school age population is projected to remain at about the current level, but the proportion of the population which is economically active will increase, thus reducing the dependency ratio, and potentially making more resources available for education.

2.5 In the Arab States and North Africa the annual average demographic growth rate is 2.5% per annum. To attain an 80% enrolment rate by 2010 will require that primary education opportunities be made available for an additional 29 million students; this in the context of many countries being afflicted by conflict. In South East and East Asia, declining fertility rates in China should result in a major decline in the school age population by 2015, from 220 million to an estimated 183 million, although this projection may underplay the circumstances of minority groups. In Latin America and the Caribbean, it is the slow expansion of secondary education that represents a significant brake on the pace of development. In the island states of the Pacific primary enrolment is high, and the main issues are quality, equity and the expansion of secondary and higher education.

2.6 Assessment of the effectiveness of primary education and the quality of learning outcomes is difficult, although rates of drop-out from school, the proportion of pupils who have to repeat years, rates of primary completion and transition to secondary education, are useful proxy measures. A recent survey19 of 58 countries showed that, in 23 of them, more than 20% of children enrolling in the first year of primary school failed to complete four years of education. Completion rates of the full primary cycle in most countries in sub-Saharan Africa are between 60-70%. And there are significant in-country disparities that reflect inequalities in access and provision of schooling. Africa also has some of the lowest transition rates to secondary education, many below 10%. Two thirds of all African countries have gross enrolment rates in the secondary sector of below 40%.

2.7 The gender gap is most pronounced in sub-Saharan Africa and South and West Asia (Figure 3). Of the 25 countries worldwide with the poorest girl: boy ratios in primary and secondary education, 17 are in sub-Saharan Africa. In 1998, 54% of school age girls in sub-Saharan Africa were enrolled in primary school, compared with 66% of boys. The comparable figures in South and West Asia were 67% and 79%. In most high-income countries and Eastern Europe there is near parity of enrolment, and arelatively small difference in Latin America and the Caribbean. At the secondary level there is growing parity between girls and boys who are enrolled (South and West Asia is lowest with 40%) but the actual percentage of school age girls who pursue secondary education remains low as Table 2 shows.

2.8 Globally the gender gap has been closing. However faster progress in sub-Saharan Africa, South Asia and the Arab States is required if the 2005 target of parity is to be met, as the gradient on the regional curves on Figure 3 demonstrate.

2.9 According to figures from the United Nations Educational, Scientific and Cultural Organisation (UNESCO)20, the total number of adult illiterates (men and women over the age of 15) fell from an estimated 962 million in 1990 to 887 million a decade later. Despite this, over one in five adults is illiterate in the year 2000 and the majority of these are women. Regionally, Eastern and Southern Asia combined have an estimated 71% of the world’s illiterates. This literacy gap is an enormous barrier to sustainable development and is compounded by the very substantial gender gap in adult literacy (Figure 4). And illiteracy in rural areas is more than twice as high as urban areas.