HIV is one of the major social issues of the end of this century. Despite a major effort of the developing countries, supported by the international community over the last 9 years, the epidemic continues to spread rapidly, especially in the developing world.

Already in 1987 the European Union launched a support programme to limit the spread of the epidemic and mitigate its social impact. Interventions developed at both Community and bilateral levels since then make the Europe of the 15 the most important donor in the field of HIV/AIDS actions today. In order to mobilize the highest political support and to improve the efficiency of our technical and financial support, coordination between all members of the Community is being improved and the council of Ministers adopted an important resolution on HIV/AIDS actions in the developing world. This resolution defines the European strategies and principles for the next 5 years.

One of the priority strategies in countries where the epidemic is already widespread is to ensure the safety of blood donations. Since 1987 the Community, with its partners, has accumulated well documented experience and developed a comprehensive approach.

The first project developing this approach through support for a blood policy at national level, ensuring the safety of blood transfusion throughout the country by now, was started in 1987 in Uganda. This book reports on the work undertaken and it is our hope that this crucial experience will be worthwhile for other people in ministries and donor agencies, and be an encouragement to individuals. 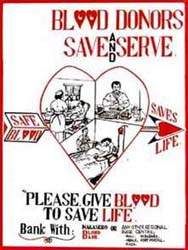