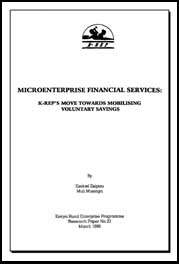 · The study revealed that the savings account is the most widely used account followed by the current account and finally the fixed account. It is the recommendation of this study that K-REP needs a mix of instruments to meet varied local demands.

· There is strong evidence from this study that K-REP needs to start by introducing two savings instruments. The first one should be the semi-liquid and the next a fully liquid instrument.

· The semi-liquid instrument (the savings account), will be one where depositors can make as many deposits as they wish, but withdraw only a few times in a month (if they exceed the given number of withdrawals, then they are fined). That account would allow for the clients to earn interest on their deposits.

· Later on K-REP can introduce the time deposit instrument (read the fixed account). In this study it was not found to be a very popular instrument. And that is why we are suggesting that only after the two other instruments have fully taken off, should K-REP consider the fixed deposit. For this instrument, the clients will be able to deposit their money for a fixed period of time i.e. three months, six months, one year, but earn a much higher interest as opposed to the earlier two instruments.

· Given the fact that most of the respondents would like the K-REP bank not to located more than two kilometres away and either near their residences or business premises, it is recommended that the proposed bank be taken to the people (sort of a village bank).

· The bank’s branches should be established in the present area offices with service posts being established in K-REP’s already existing field offices. Mobile posts should be established in outlying areas that have significant business activity but insufficient transactions. That will allow for the transformation of the field offices and posts receiving mobile services into branch and field offices once they generate sufficient transactions. It has been realised that the proximity of the bank (how close and accessible it is to the people) is one of the most powerful incentives to savers.

· K-REP should be ready to offer its services from a secure place and be able to cultivate a feeling among the depositors that their money is in a secure place (that they do not face a risk of loosing their money through unscrupulous deals).

· Convenience of banking services is crucial to the success of any savings program. This study recommends that the banks services should be offered in a way that is not seen to be inconveniencing the savers in any way. That in essence means that their is need for flexibility in the banks opening and closing hours and even the number of days it should be open in a week.

· As it has already emerged K-REP will need to offer her services all days of the week except Sunday. She will also have to be opening slightly earlier and closing slightly later than what we are seeing the existing banks doing. It should most preferably be opening on weekdays at 8 a.m. and close at 5 p.m., while on Saturdays, it should be opening at 8.30 a.m. and close at 1 p.m. That in a way will allow the savers to get their services at a time which is convenient to them.

· There are also various considerations that K-REP will have to bear in mind. According to this study, people have several issues they consider as being crucial to them before they open any sort of account with the K-REP bank. High among them is the low minimum balance for opening an account, possibility of getting credit facilities, fast services, good public image of the bank and favourable interest on deposits. Those are incentives to savers that K-REP needs to look at critically and consider with a view of wooing depositors.

· Given the nature of the informal sector entrepreneurs (it is assumed most of K-REP’s clients will come from that pool), limitations on the number of withdrawals to be made does not augur well for them. 2 it is true as this study suggests that people save in banks so as to be able to use the money for emergencies and for other business deals that may arise from time to time then trying to limit the number of times they should be making withdrawals kills that same spirit. Restrictions on withdrawals is unacceptable and can act as a disincentive to savers. In any case, organisations which have deposit programs consider unlimited withdrawals as key factors behind their success (see Boomgard, J. J; et al; 1994).

· In conclusion, the study notes the fact that a set of different instruments offering different proportions of liquidity and returns can simultaneously meet demand and permit institutional profitability. K-REP should offer a set of deposit tools for voluntary savings that provides the saver with convenience, security, liquidity, and high returns.