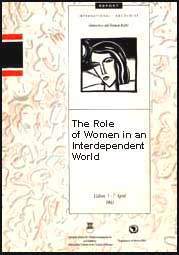 The picture sketched of African society by the speaker from Zaire was described as 'Afro-pessimism' by Amsatou Sow SidibLecturer at the Law Faculty of the University of Dakar. This comment stimulated a lengthy debate.

According to Ms Sow Sidib"the inequalities in the situation of women are a result of the introduction of two external cultures - Islam and colonialism - which were not well assimilated This cultural clash created imbalances in the lives of Senegalese women as well as other African women." However, Ms Sow Sidibonsidered that: "even today, the situation of the Senegalese woman is not that gloomy. The Black-African culture persists and comes through as much on a socio-cultural level as on the economic and political level." Warning against any attempt of generalisation, Ms Sow Sidiboncluded that Senegalese women had rights and managed to use them and have them respected to such a degree that: "in Senegal men say that the family code is the women's code as it grants her important rights."

Albertine Bukasa clarified that her speech had not intended to paint a gloomy picture, she did wonder nevertheless, how many of these Senegalese women enjoyed their full rights. She added that: "In Zaire, women only receive two-thirds of their salary during maternity leave, which is not very surprising in a country where even pregnant women or breastfeeding mothers can be imprisoned. Africa is a vast continent and the situations are certainly different all over, but a lot of work still needs to be done to allow the African woman to thrive."

Diana Macharia, Information Manager at the Environment Liaison Centre International, Kenya, insisted on the importance of taking into account the disparities between African countries, and suggested that different strategies be drawn-up according to each country. Ms Macharia was also keen to stress that education was not the only solution: "It is important, but it alone is insufficient, because even educated women are confronted with big problems. Would we be better off concentrating more on raising women's awareness of their legal rights?"

Fifi Benaboud, President of the Algerian NGO "Women, Environment and Development", insisted on the need to discuss democracy, not in an abstract way, but by taking into account the specifics of the societies in question: 'We are making a mistake if we talk about democracy as a principle, of democracy with a capital 'D', without taking into account the nature of the societies concerned. Our Norwegian friend has just reminded us that the electoral process is the basis of democracy. But if we look at the present situation in Algeria, we notice that the electoral process, which should have allowed us to enter a period of democracy, has been rejected. We, Algerian women, reject democracy if it means giving power to an Islamic party which wants to step back one hundred years. As comical as it may seem, Algerian women are now calling for the power of the army."

Fatima Alaoui, Secretary General of the Green Party of Morocco, President of the Maghreb Forum and President of the Agency for Research, Information and Training for Women, supported the promotion of a new form of co-operation between women in the North and in the South. She raised the problem of illiteracy, which affects about 90% of African women, and mentioned the very serious consequences that the burden of debt had on women's lives. Ms Alaoui suggested that Members of the European Parliament should support the principle of the transfer of the debt interest to development projects in favour of women.

Radhia Riza, Vice-President of the Executive Board of the National Union of Tunisian Women and a Town Councillor, talked at length about the Tunisian code of personal status. She also provided figures on female participation in positions of authority in her country: six women in the Parliament; two members of government as Secretaries of State; and 14% elected representatives in Town Councils. She concluded by giving a warning against Muslim fundamentalism and the dangers that it represented for democracy.

Yasmin Shahid, Senior Director of the Family Planning Association of Pakistan, appealed that one should not confuse Muslim fundamentalism and Islam. "Just as the perpetrators of the Spanish Inquisition are not representative of Christianity, similarly a pew misguided Islamic extremists are not representative of what Islam really is. This distortion is provoked by the media: the most intolerant Muslims are given the most media coverage whereas those who practice a more progressive and tolerant kind of Islam, in the true spirit of Islam, are ignored."

With regard to the conditions for development aid, she expressed her fear that: "This link between development aid and human rights might be misused to cut off aid to developing countries, women being once again those who will suffer from restrictions in the field of health and education."

In conclusion, Ms Shahid commented that the criticism directed at family planning policies, for being too abusive and coercive, could lead to a reduction in grants on the pretext that family planning is not a human right. As a woman working at grassroots level, she underlined the tragic consequences for the life and health of women in Third World countries: "This forum should discuss and agree to recognise that family planning is a woman's fundamental human right and that more funding should go into research in order to improve contraception, not only for use by women, but also by men."