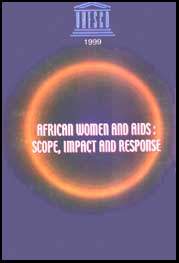 Despite some two decades of concerted HIV/AIDS prevention activities, the pandemy continues to escalate. UNAIDS estimates that 16.000 new infections occur everyday throughout the world, 70% of which occur in Sub-saharan Africa.

Women are increasingly being affected by this pandemy, especially in Africa, where the situation is alarming. Actions taken up to now have had some set-backs mainly because of the channels of communication used. Other factors related to the vulnerability of women have been at play as well. These are among other factors: the low level of involvement of men, the influence of the mass-media on the education of the children, lack of dialogue on sex issues between couples and between parents and children, traditional practices which have negative effects on women's health and the economic dependence of women.

The vulnerability of women increases the impact of HIV on the family, the community and the society at large. The analysis of the chain of consequences leads to the conclusion that reducing the vulnerability of women will not be possible unless there is the political will to take serious steps to safeguard the fundamental rights and improve the economic autonomy and the legal status of the population in general and of women in particular.

We are here concerned with two main categories of women's organisations, those whose activities are exclusively linked to HIV/AIDS and those which have a wider area of interventions (health, environment, economy, advocacy and spiritual issues). The experience of these organisations in different countries confirms the need to readapt our messages, reinforcing the actions to be undertaken and involving men, policy makers, religious and traditional leaders in the HIV/AIDS prevention campaign.

In Africa, there has always been complementarity between men and women in handling a wide variety of societal problems, and specifically issues touching on the improvement of the autonomy of women and aimed at creating a system which seeks to empower women, making them more independent and better able to control their own earnings and manage their funds. It is therefore necessary to strike a balance between the roles of women in the family and in society. This should go along with their full involvement in decision-making and putting a stop to all women marginalisation tendencies.

Since HIV/AIDS prevention education is one sure strategy of raising awareness of the need to protect women, UNESCO in collaboration with UNAIDS and the UNDP regional project on HIV and Development organised 7-11 September 1998 a regional workshop for co-ordinators of women's grassroot organisations from 17 African countries.

This book is an attempt to bring the rich papers presented at the workshop to the attention of a wider audience of actors, especially those working with women's grassroot organisations. We hope that they will find in the book useful ideas and information to reinforce their programmes of HIV/AIDS preventive education.