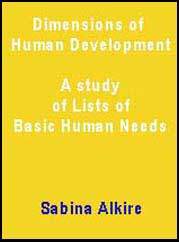 Elements of the lists

We have come a long way. We started by observing the phenomenon of human-end-list-making among economists and social scientists, and the need for concerned research on human ends. We then reflected on the practical use that such generic and universal lists would have (if they could exist) in the social sciences. We then examined the characteristics of the elements of the list, as finite, comprehensible, complete, and 'generic'. There followed a sideways excursion into Amartya Sen's work on capabilities, where the question was re-phrased in terms of the need for a structure of human capabilities, and some pitfalls to be avoided were noted. Finally, Part I of this paper wrapped up with a simple suggestion of 'what' the dimensions of human development might represent, the appropriate level of generality, and the relation of such a list to the capabilities approach. The relationship between different parts of the approach are represented below.