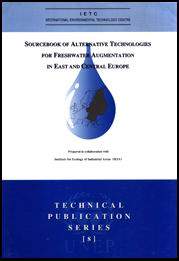 Effective reduction of global environmental impacts requires both a clear, integrated, and holistic understanding of the economic and societal that govern such impacts, and the appropriate technologies and instruments of environmental policy that can be applied to mitigate such impacts. In this regard, there is widespread recognition that the management of freshwater resources must be among the highest priorities of business, government, community organizations, and individual households. Nowhere is this recognition more clearly stated than in the milestone, 1987 report, "Our Common Future", by the World Commission on Environment and Development (the Brundtland Commission), and its successor, "Agenda 21" agreed at the United Nations Conference on Environment and Development (the Rio Conference). These documents emphasized the importance of alternative and unconventional technologies for augmenting water resources in the pursuit of sustainable development. Maximizing the efficiency of use of existing freshwater resources, and augmenting existing sources of water, are vitally important aspects of sustainable development which involve meeting the needs of the present without compromising the ability of future generations to meet their needs. Economic growth provides the conditions through which protection of the environment can best be achieved, and balanced with other human goals, provides that such development be sustainable.

At present, Eastern and Central European countries are undergoing a process of transition from centrally-planned to market economies. This presents an opportunity to change the basis upon which environmental impacts are accounted for in the economies of these countries. At the same time, the technological changes in the industrial, rural, and municipal sectors present an opportunity to introduce more effective (efficient) means of reducing environmental impacts within the sectors that have traditionally created the greatest degree of environmental impact. While the scale and nature of environmental problems varies in the different subregions of Eastern and Central Europe, most problems are of common origin.

Eastern and Central Europe, with few exceptions, is a well-watered region of Europe, with many rivers and lakes, although relatively few are sizable lakes. Because urbanization and industrial development occurred in the formerly centrally-planned economies without proper measures for environmental protection and sound water management, the state of environment declined, with numerous instances of environmental pollution, water resource depletion, and creation of threats to subsequent development. The lack of efficient technologies of production contributed to high rates of water consumption, especially in power generation, mining, and steel industries. The resultant degradation of surface water quality forced authorities to switch to the extensive use of groundwater, overuse of which for industrial purposes lowered the table of water and caused wells to dry up. In many locations, the surfacial aquifers (water-bearing layers) were completely destroyed or contaminated, forcing many users to exploit progressively deeper ones. While such artificial water shortages are especially characteristic of areas with large industrial water demands and surface mining activities, their impact has extended into many rural areas, where there is an urgent need to install or replace water supply systems.

In some parts of the region, contamination of the drinking water supply is a serious problem. For instance, overuse and contamination by sewage has stressed the piped water supply system in Tirana, Albania, and has resulted in gastrointestinal infections and outbreaks of diarrhoea, dysentery, and hepatitis. In September 1994, the first case with cholera since 1914 was diagnosed after two deaths due to dehydration. Other cases of cholera were observed in Berat, Kucove, Elbasan, Lushnje, Lezhe, and Fier, as well as in Peshkopi, Kruje, and Kurbin. While this epidemic situation was stabilized by the end of November 1994 at the beginning of winter, a further 15 of the 17 persons who had been hospitalized in the Psychiatric Hospital at Elbasan died of this disease.

Throughout the region, technological development has led to the abandonment of traditional practices of water management, such as rainwater harvesting. Furthermore, because these technological developments provided an abundance of water without charge to the consumers, and without regard to the protection of the water resources from which the water was abstracted, many people used water carelessly. As a result of the lack of regard for the environment, many mistakes in catchment area management were made. For example, excessive river beds regulation through construction of numerous weirs, diversions and dams resulted in the drying of bogs, ponds, and small lakes, all of which are essential elements within a watershed and contribute to sustainable water supplies. Hence, while such developments provided abundant water in the short term, the environmental damage that occurred crucially depleted renewable water resources in the longer term. In addition, industrialization, urbanization, and the development of polluting transportation systems over the years discharged high pollutant loads to aquatic ecosystems, their catchment areas, and the surface and ground water system. In many regions, especially those dependent on surface water sources for their water supply, and usually located along the upstream portions of large European rivers such as the Vistula, Oder, Danube, and Dnieper, these actions of the past have created water shortages due to water quality problems as a result of contamination of these rivers with toxic pollutants. Eutrophication, or the enrichment of waterbodies with plant nutrients, likewise is a common problem in Eastern and Central European countries, primarily due to inappropriate infrastructure and poorly functioning communal wastewater treatment facilities which allow large quantities of biogenic materials to enter natural waterbodies. This process is exacerbated by intensive and widespread use of fertilizers in agricultural practices.

Traditionally, governments have responded to the additional water demand created by such artificial shortages by increasing the water supply. However, in many Eastern and Central European locations, this practice is no longer an easy task because of the diminishing of water resources. With depleting water resources and increasing costs of supply, there is a need to maximize the use of existing water and to make use of hitherto unexploited water resources. There are numerous techniques, modern and traditional, for maximizing and augmenting water resources, practised in different parts of the world, and similar techniques for minimizing water use both in industry and in the community. These include wastewater reuse, water recycling, desalination, wastewater treatment, and rainwater harvesting. In Eastern and Central Europe, these techniques also include implementation of technologies that enhance water economy, purify contaminated water, better manage water distribution systems, stimulate proper consumer habits to reduce household water use, preserve and protect catchment areas, and augment retention. While some of these technologies can be, and have been, applied in other regions, their application in Eastern and Central Europe has been often limited by lack of information on the techniques that are feasible and which techniques are available.

Because such limitations are widespread, the United Nations Conference on Environment and Development, in Chapter 34 of Agenda 21, called for the transfer environmentally sound technology, through cooperation and capacity building between countries, and identified improved access to information on environmentally sound technologies as one of the priorities to facilitate technology transfer to developing countries and countries with economies in transition. Likewise, Chapter 18 of Agenda 21 encouraged the utilization of appropriate technology in water supply and sanitation. In combination, the primary objective of Agenda 21 is to improve access to technical information so as to enable countries in transition to make informed choices, leading to the use of appropriate technology for their specific situations.

Sustainable development can be promoted by policies designed to encourage development, deployment, and, when appropriate, distribution or transfer of technologies which are intended to reduce, to a justifiable minimum, the use of energy and raw materials, and the creation of wastes and release of contaminants to the environment, in order to produce the goods and services demanded by society. To help water resources managers and planners around the world, and especially in developing countries and countries with economies in transition, improve their environmental performance, the United Nations Environment Programme (UNEP), through its Water Branch and International Environmental Technology Centre (IETC), established a task force to create this Source Book of Alternative Technologies for Freshwater Argumentation in Eastern and Central Europe. The main objective in the preparation of this Source Book was to compile a thorough inventory of available technologies for maximizing the use and augmenting the existing freshwater resources in Eastern and Central Europe. As a result of this practical focus, information on the capital as well as the operation and maintenance costs, ease operation, and suitability of the technologies is also included, and case studies of innovative and cost effective technologies are documented. The technologies identified in this Source Book include alternative technologies that both maximize the efficiency of use of existing freshwater resources and/or augment existing supplies by drawing on unconventional sources of water. It is intended to be a reference manual, presented in a user-friendly format, which contains the information needed to implement a programme of sustainable water resources management. It is specifically designed to assist water resource managers and planners in fulfilling their commitment to environmental stewardship in a comprehensive fashion, but will be of interest and value to environmentalists in general and to all those concerned with water management.

This Source Book is one of five regional guides, the contents of which will be compiled into a global handbook which includes Eastern and Central Europe, Latin America and the Caribbean, Asia and the Pacific, Africa, and Small Island Developing States. While each of these regional Source Books will encourage sharing of technologies and experiences within particular geographical regions, the comprehensive Source Book will encourage information and technology transfer between major regions of the globe.