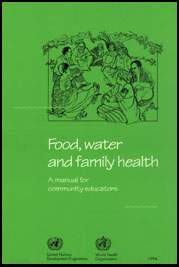 In one of our water committee meetings we were all annoyed by buzzing and biting mosquitos.

“They are not only annoying, but they also carry malaria and other diseases,” we all complained. “How are we going to get rid of them? They are everywhere.”

“There are also mosquitos that do not buzz. Sometimes you cannot even feel when they bite - but they are still dangerous. Mosquitos are a real problem for us,” said the schoolteacher.

“But where do they come from?” asked a young man.

“I heard on the radio how mosquitos can breed in less than a cup of water,” a woman replied. “Puddles and rubbish near our houses must be full of them. When we leave old containers lying around they fill up with water and mosquitos come to breed.”

“That means if we fill in puddles, unblock drains, and clean up rubbish and old containers, we will be able to get rid of most of the mosquitos,” the young man responded.

“We should also cover any water containers we use.”

A health worker explained how people near her home filled in puddles.

“Some even turned them into beautiful gardens.”

Ponds can also be stocked with certain kinds of local fish to eat baby mosquitos which are called larvae,” she continued.

“It would help to cut the grass around our houses because mosquitos use tall grass for resting. Rats and snakes also hide in the grass, so it is a good idea to keep it cut short.”

One couple with several children told us they protected their family from mosquitos by using mosquito nets.

“We repair the nets regularly.”

“That is a very good way to prevent mosquitos from biting you,” the health worker said.

“You can also protect yourself by wearing clothing which covers your arms and legs, especially after dark.”

“Mosquitos carry several diseases, the most important of which is malaria,” the health worker continued.

“What if we take precautions and still get malaria?” a worried woman asked.

“It must be treated quickly,” the health worker replied.

“If you have a high fever and think you may have malaria, go immediately to the clinic or health practitioner.

“Usually malaria can be treated very effectively with chloroquine or other tablets, if treatment begins straight away.”

“Or you could go to the injection doctor,’’ said a man from the back of the room.

Before the health worker could reply, another man spoke out. “My young son had a fever. We took him to an untrained person who gave him an injection. After the injection, he developed a painful infection. He almost died.”

She explained that in those cases when injections are really necessary, they should only be given by trained people who have properly sterilized the needle and syringe.

Children can be crippled if the injection is not administered in the proper way.

Fortunately, this tragedy can be avoided in the treatment of malaria because the tablets or syrups are just as effective as injections, except when a child is unconscious, cannot swallow, or is continually vomiting.

“I can see why it is a good idea to deal with our mosquito problem,” an older woman said.