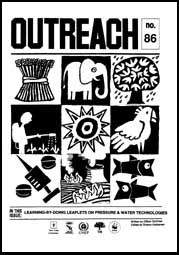 The Learning-By-Doing leaflets in this pack are divided into two setions (I) Pressure and (II) Water Technologies. The latter covers the following topics: water supply; water-lifting devices and water treatment

TEACHER'S NOTES FOR (I) PRESSURE

LEAFLET NO. 37: UNDER PRESSURE

What happens? If you have done everything properly, the card will stay in place.

Learning by trial and error

The students may have some difficulty getting the activities to work. This is an excellent opportunity for them to act like science detectives and try and track down that small detail that means the difference between success and failure in the experiment. For example, if students have trouble with the magic glass activity above, which involves holding a piece of cardboard under a glass of water, it may be because of the cardboard. As long as the cardboard does not sag or get soggy, it will stay in place by itself. If the cardboard is not firm and flat to begin with, it will let air in and water out, so the experiment will not work.

In the experiment "Lifting water with air pressure", a stopper is needed as part of the experiment equipment. Stoppers can be made from a variety of things, such as a sponge rubber ball, a cork, a rubber stopper or a plastic bag:

Find examples in your local environment that demonstrate air pressure in action. Here are two possibilities:

(1) Birds' flight: Have you ever wondered how birds fly? They flap their wings, but how does this keep them up in the air? They don't come crashing down because they push on the air with each wing-beat, and the air pushes back. The force of the wing-beat makes more pressure in the air underneath the wing, and his extra pressure pushes the bird up.

Ask the students to watch a bird in flight. See how the wing going up does not push as hard against the air as when the wing goes down. It's similar to the way people tread water.

(2) Bicycle pumps: If you squash air, or any other gas, into a smaller space, it pushes back. It is trying to spread out again and fill the space it used to have before you compressed it. This pushing back is very useful because it makes the air act like a spring. If you block the end of a bicycle pump with your finger, then push the handle hard, you will feel the springiness of the compressed air inside the pump.

Atmospheric pressure can be measured with a rubber suction cup. The force required to pull the sucker away from a smooth surface can be found by using a spring balance:

The area on which the atmospheric pressure is acting can be measured by pressing the sucker on a piece of squared paper. It is best to use a sucker which has a hook attachment. If one of this sort is not available, tie some copper wire firmly around the neck of the sucker to form a loop. If possible try this experiment using different sized suckers.

(a) To increase pressure either increase the applied force or decrease the area over which the force is applied.

(b) To decrease pressure, decrease the applied force or increase the area over which the force is applied.

(c) By lying flat on his stomach, the man is spreading the force over a large area.

Variation on this activity: Fill a soda bottle completely with water. Put a straw in the soda bottle, and seal with modelling clay, cotton, or wet paper. Challenge a friend to drink the water from the bottle. If air is completely excluded from the bottle, your friend will not be able to do it.

Make your own barometer

A barometer is a simple instrument to read. As the air pressure changes, a needle moves around a dial which is marked Rain, Showers etc. so that we can read out the changes in weather. The learning leaflet describes how to make one simple type of barometer. Here is another way to make a barometer.

Fill the bottle full of water. Cover the bottle with a dish, hold the dish and bottle tightly and invert them so the bottle stands upside down in the dish of water. Changes in air pressure will affect the level of water in the bottle. Stick a small piece of tape on the outside of the bottle, and mark the water level each day.

The students could make both types of barometers, and keep daily records of readings from each one. Then, the students can determine which barometer works best.

To reduce soil erosion, land should be farmed across the hillside, not up and down the slope. Better still, barriers such as hedges or stone lines running level with the contours can help slow run-off and increase the amount of rainwater that soaks into the ground. Here is one device that can be used to mark out contour lines on a slope. You will need:

LEAFLET NO. 38: GETTING LIQUID TO WORK FOR YOU

The experiments described in the student leaflet use very simple equipment to demonstrate water pressure at work.

Pressure is not affected by the size or shape of the vessel: it only depends upon the depth of the liquid.

Note: The water may squirt out the same distance at first, but the water level will drop more quickly in the narrower container, so the water will not continue to squirt out as far as that in the wider container.

The following experiments using more elaborate equipment may be tried in class:

1. Connect the drinking straws to the short length of tubing, and attach them to an upright board, as shown in the diagram that follows.

2. Put some water in the tube to a depth of 6-8 cm., and add one or two drops of food colouring so that the water is clearly seen.

Tape a ruler next to the open straw. This is your pressure gauge or manometer (said: man- OM-eter).

3. Stretch a piece of thin rubber tightly over the funnel and secure with some string. Fix the funnel to the manometer with the 30 cm length of rubber tubing.

4. Push the funnel into the bucket of water. What happens? As the inverted funnel goes deeper into the water, the manometer liquid level changes.

Conclusion: Water pressure forces the air in the funnel and manometer tube to move the manometer liquid.

5. Measure the water pressure when the funnel is held just below the surface of the water. Then, move the funnel down to the bottom of the bucket. How does the pressure change with depth?

(B) Fill a jar of small diameter and ajar of large diameter with water to the same depth. Measure the pressure at the bottom of each jar. How do they compare?

(C) Take two jars of the same size and fill one with water and one with a less dense liquid such as rubbing alcohol. Make sure the depths of the liquids are the same. Using the funnel and manometer as described in 1-4 above, measure the pressure at the bottom of the water jar and then at the bottom of the alcohol jar. How do they compare?

A garage and a construction site are two good places to see hydraulic machines at work. Visits to such places require the owner's (and parents') permission, and should be undertaken only when students can be well supervised.

An hydraulic lift in a garage easily raises the great weight of a car for inspection. Although it contains only one piston, it does work by hydraulics. Ask the garage owner if it is possible for your students to see the hydraulic lift in action. It may also be possible to study how a car's hydraulic brakes work.

Machines such as bulldozers, work with hydraulic rams. Each ram consists of a piston in a cylinder connected by pipes to a central reservoir of hydraulic fluid. By having two-way valves in the hydraulic cylinder, the piston can be made to push in either direction. That is how the powerful rams on a bulldozer can gently lift and lower its huge steel blade.

A hydraulic ram is a machine which pumps water up to a height of 100 metres or more. It can be used to pump water from a river in the valley to a village in the mountains.

The pump uses no motor and is easy to repair, but it does not work in all places. It needs falling water, so it cannot work in areas which are very flat and it cannot pump water from a well. The falling water forces a small amount to a height greater than the source. At least 7-14 times as much water is needed to work the pump that is raised. A small amount of water with plenty of fall can pump as much water as a greater amount with only a little fall. The water source needs to be at least one metre above the pump. Plenty of water must be available. It is one of the cheapest methods of raising water and it needs only a little maintenance. The diagram below shows how it works.

Here is one way to make a model hydraulic ram.

* a large plastic bottle from which the bottom has been removed;
* a ball point pen tube;
* a one-hole stopper which fits the bottle top, and through which the ballpoint pen tube fits;
* a metal T-tube;
* three pieces of rubber tubing of various lengths.

1. Set up the apparatus as shown:

2. Fill the bottle with water. (This reservoir will act as a natural stream flowing downhill.) Pinch the tube at the end. Let the water run from the end of the tube. Stop the flow suddenly by quickly pinching the tube, and note the height to which the water squirts from the jet tube. Let the water flow and stop alternately, and you have a working model of the hydraulic ram.

In both examples above, the momentum or speed of the water is important. Similar to the lever examples, the amount of water is exchanged for the distance it is raised.

A hydraulic ram is sometimes used to raise water from a low level to a higher level. It is operated by a flowing stream of water, and it pumps a fraction of this flow to a greater height.

Can your students design a hydraulic ram? They may use an actual small fall in a natural stream to pump a much smaller flow of water to a greater height. Or they could create their own artificial water reservoir. How can the flow of water be controlled?