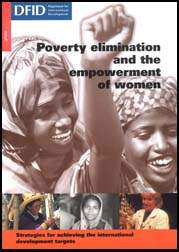 4.8 The donor community is made up of a number of key actors, each of whom has a slightly different role, and each of which faces challenges in strengthening its contribution to the achievement of international gender equality goals.

4.9 The funds and programmes and specialised agencies of the UN have the task of helping to deliver the global, normative framework for development set down by the various UN conferences and conventions43.

4.10 The smallest of the UN funds, the United Nations Development Fund for Women (UNIFEM), has the central strategic role in promoting gender equality work in the UN. In the past UNIFEM was considered to be limited in its effectiveness and too small to make a major difference for women in developing countries through its own projects and programmes. Under the wider umbrella of the UN reform programme, however, it has made major strides in establishing a more strategic role for itself. It has taken on a more significant role in knowledge development and capacity building, and supporting greater co-ordination within the UN and between the UN and the wider donor community44.

4.11 Other funds and programmes and specialised agencies have performed in a rather mixed way, and there is considerable scope for improvement. The United Nations Development Programme (UNDP), for example, has made a major contribution through its global analysis and the establishment of new measures like the GDI and GEM, but the extent to which gender equality has been a focus of country programmes has been uneven. By contrast, the United Nations Children's Fund (UNICEF) has put considerable resources into meeting the needs of women, as well as children. This has tended to focus, however, on their practical needs as mothers rather than their wider strategic needs as members of society entitled to equal rights. Others, including the International Labour Organisation (ILO), the United Nations Scientific, Educational and Cultural Organisation (UNESCO), and the UN Conference on Trade and Development (UNCTAD), are actively working to strengthen their gender equality work, but all acknowledge that a lot more needs to be done. The UN reform programme offers important opportunities, particularly in seeking to establish more integrated country programmes and more sharing of analysis and expertise, and the establishment of a common framework for assessment and progress measurement.

4.12 The international financial institutions, most notably the World Bank, but also the African Development Bank, Asian Development Bank, Inter-American Development Bank, and the International Monetary Fund, are key partners for development work and command the biggest share of financial resources earmarked for development purposes. In the past, all of these have been weak in their approach to gender concerns. This situation is rapidly changing, however, as new knowledge is emerging of the constraints imposed by inequality on economic development. The development banks have also shown more willingness during the 1990s to improve the skills mix in their staffing and bring in more social scientists to help them gain a better understanding of the important linkages between economic and social policy issues.

4.13 The World Bank has made a particularly important contribution to understanding the costs of gender inequality for growth and poverty reduction and has, as a result, added considerable weight to the instrumental and practical arguments for more investment in women45. This has been an essential complement to the normative, rights-based arguments advanced through the UN.

45 In 2000 the World Bank is issuing a new Policy Research Report, Engendering Development, which provides further evidence of the crucial linkages between poverty reduction, economic growth, and women's empowerment.

4.14 The European Union is the world's biggest channel for donor funding. The international development efforts of the European Commission (EC) have been the subject of considerable criticism by member states, including the UK46, and a great deal of work is required to bring about reforms which will allow the EC to perform to its full potential. Organisational and procedural problems, along with an inappropriate skills mix, is currently constraining its capacity to turn good policy into effective practice. Like all big agencies, however, it has produced very good work in some areas and the foundations exist for real progress to be made.

4.15 The Commonwealth Secretariat also plays an important role, and is particularly well placed to help member governments address controversial and politically sensitive issues. Despite having modest resources, it has been making an important contribution in bringing issues like violence against women to the fore, and has led ground-breaking work on public spending reform making use of gender-sensitive analysis of the implications of different public spending choices. The Commonwealth as an organisation also provides an important framework for strengthening global consensus around key economic and social policy issues, bridging the divide between rich and poor countries.

4.16 The Development Assistance Committee (DAC) of the Organisation for Economic Co-operation and Development (OECD) is the main forum for bilateral donor co-ordination. This makes international policy in relation to bilateral development assistance and provides guidelines and other support to donor activities. DFID's policy on gender equality is fully consistent with guidelines issued by the DAC in 199847, which in turn draw upon the key agreements set out at the Beijing conference. The substantive work of the DAC is undertaken through Working Parties and other subsidiary bodies, including a Working Party on Gender Equality. The DAC subsidiary bodies have been at the forefront of development thinking, and will remain a vital forum for future work.