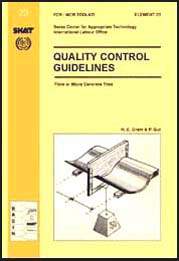 Beside the quality of the raw materials, careful production is the other important requisite for a high standard product.

The tests involved in the production process are:

Why this test
An easy way of controlling that the right mix proportions have been used in the mortar is to check its workability.

How
The workability can be measured in the following way:

Place a plastic interface sheet on the vibrating table top. Place a standard mould in the center of the table top. Press the mould down to the table and fill it with mortar and tamp the mortar 20 times with a tamper (for instance the thick end of a pencil).

Cut off the mortar flush with a trowel.

Cut off the mortar flush

Record keeping: yes
Measure the average diameter of the mortar “pancake” that results.

The bigger the diameter of the “pancake”, the shorter vibration time is needed for the compaction. If the workability is too high, the mortar might be overvibrated during production, i.e. the components of the mix may separate. In this case the water addition has been too high. (The sand may also be too wet). You should therefore add extra cement to the mix.

Experience tells you what the best workability for a given raw material is.

If the workability differs more than 20 % from your standard adjust the mix. If too stiff, add cement paste (a mixture of water and cement with fixed, low water to cement ratio). If too wet, add sand.

The strength development of the mortar has to be tested
- to determine the best mix and to control the quality of the raw materials.
- to control if the FCR/MCR products have gained enough strength prior to demoulding (after 24 h).
In a situation where this test is too complicated it may be substituted with the “Bending Test” (4.3.10).

The strength development of the mortar can be controlled on specially prepared specimens.
The specimens could be prepared for mortar produced at the end of the day.

Demould the two specimens after 24 hours (or according to the time you intend to demould your tiles) and test one of them immediately. Mark the second specimen with the date and store it in the curing tanks together with the FCR/MCR products produced the previous day.

The specimens tested at the age of 28 days should be cured in the same way as the FCR/MCR products, i.e. in water for at least 5 days and in air protected against sunshine and fast evaporation for one week. After the curing period the specimens may be stored dry in the workshop.

The mortar strength test should be done once a day. The strength of the specimens should be determined after 24 hours or according to the time you intend to demould the tiles.

Record keeping: yes
If the specimen does carry the load it has a flexural strength of at least 1 MPa (N/mm2 or 10 kp/cm2 ) after 24 hours and at least 5 MPa after 28 days.

This is sufficient for a good quality tile.

1. A specimen tested after 24 hours fails:
It can be tested again by putting the other end of the specimen into the strength test rig and applying the actual weight (100 g) on the previously broken edge. If the specimen carries the load no other action is necessary other than preparing new specimens for testing the following day.

Before new FCR/MCR products are produced the reasons for the low strength must be found. Prepare new test specimens and test both of them after 24 hours. If they also fail:

3. The 28 day test fails: The regional center should be contacted for investigating the reasons for the failure.

Only the correct size and shape of all tiles ensures a proper fixing on the roof. Poorly fitting tiles easily crack under load and wind driven water may enter the roof.

Tiles that are not square will not fit properly and the overlap will not be sufficient.

Tiles that are too thin will leak and are not strong enough.

Check every tile that it has the right dimensions, shape and profile during the demoulding operation. For tiles the special quality control jig developed by JPM Parry can be used.

Hold the mould on edge and place the tile against the quality control jig. Roll the mould with the tile over on the jig’s pivots until upside down. Lift the mould off. Remove the plastic interface sheet by pulling straight across from the side edge.

Run around tile edge with a knife to remove any excess flash. Check carefully that the tile fits the jig and does not wobble.

The edge of the bar should be seen, but should not have a gap showing beneath it.

If the jig is not available the test can also be done on a mould.

Always use an especially assigned mould only used for this purpose. If a plastic mould is used then it must be adequately supported to prevent flexing.

Test on a standard mould that the edges of the tile are parallel with the mould.

Thickness at the edges:

Thickness in the middle:

Occasionally, check also the thickness of the tile in its center, by breaking the tile.

Record keeping: yes
The product should be within the following tolerances:

Consequence
If test fails
Discard tiles that fail the test. If the thickness varies too much the mix has to be examined and/or the worker should improve his performance.