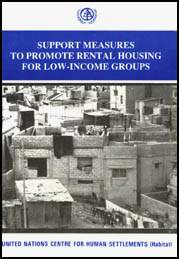 Usually the rental legislation shows few differences between cities in the same country. In Mexico, while the state authorities are responsible for most regulations covering rental housing, they tend to adopt similar guidelines and usually follow the example of the Federal District. Of course, the local authorities sometimes take an exceptional line, usually for political reasons. During the 1980s, for example, the states of Puebla and Michoacboth introduced regulations which limited rent rises (Gilbert and Varley, 1991: 57-58).

In Egypt, the rent-control legislation incorporated certain variations between areas, with controls not applying to rural areas or to a number of tourist centres (Serageldin, 1993: 14). In Nigeria, state governments are responsible for housing but all the legislation follows central government guidelines (Ozo, 1993: 6). For example, the rent-control ordinances that were introduced in every state after the Civil War, adopted the pattern laid down by the Federal Government. In India, however, the controls over rents in different states do vary a great deal (Wadhva, 1993: 17-19). The main variations relate to the flexibility given to the landlord to choose tenants, the degree to which rents can be raised, the kinds of project that are exempt from control, maintenance standards, eviction procedures and the rules under which tenancies can be inherited. To what extent these differences actually influence the amount of renting in each state is uncertain.

On the whole, local legislation has much less influence on the functioning and development of rental housing than a number of other factors. The nature of the land market, particularly the cost of urban land, the way in which the authorities permit or prohibit land invasions, the nature of the transport system, and cultural attitudes to renting and ownership all influence the tenure structure of a city much more than local regulations. This is clear when rural tenure patterns are compared with urban tenure patterns in the same country. The typical ownership pattern of the countryside and the greater importance of renting in most cities cannot be explained in terms of the planning regulations. Similarly the major variations between Indian cities in the amount of renting cannot be explained in terms of the legislation. The difference between Calcutta with 76 per cent of its population renting or sharing and the 30 per cent in Lucknow is simply too large to be explained in terms of planning regulations, regulations which in any case are only partially applied (NIUA, 1989).