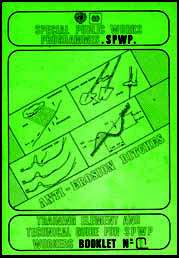 Three types of tool are required in the construction of ditches:

- those which are used in the measurement of distance and slope. These tools enable us to determine the right location for the ditch and are known as SURVEYING INSTRUMENTS;

- those needed for the digging of the trench and backfilling of excavated materials;

- those necessary to check the quality of the work.

We will deal with each of these tools in turn, giving a detailed description of its use.

(a) The SURVEYING CHAIN AND TAPE MEASURE

These two instruments are used to measure distance over the ground.

The SURVEYING CHAIN consists of a series of linked metal rods, each 20 cm long, giving the chain an overall length of 100 m. A handle at each end allows two workers to extend the chain over the ground to be measured.

The use of the TAPE MEASURE is becoming more and more widespread and is fast taking over from the surveying chain.

It consists of a reinforced graduated tape, supple enough to be wound up inside its hard protective case.

The tape is marked off in centimetres, metres or decametres.

Benchmarks are put in place to mark the location of the ditch and its different measuring points.

These marks assist us in determining the exact location for a structure and are represented by posts which are driven into the ground at the appropriate spot.

These are 60 cm long, either rounded or square-edged (4-6 cm sides), with a pointed or sharpened end which makes it easier to drive into the ground where required.

The top of the post is painted with brightly-coloured paint so that the mark is clearly visible.

IRON POSTS are made from reinforced iron bars.

The posts are driven into the ground using a 3 kg sledgehammer and should be driven down to a depth of about 20 cm.

Stretched between two posts, the purpose of the tracing line is to mark out and line up a ditch.

It is made up of:

- a 20-50 m length of 6 mm cord which must be water-resistant. Synthetic cord may be used (nylon or polypropylene);

- a wooden core around which the cord is wound.

If a tracing line is unavailable, string may be used but this has the disadvantage of being both less smooth and less water-resistant and thus less manageable.

This is a very simple apparatus but one which is very useful for siting a ditch on flat or gently sloping land.

The slope of land is its gradient. Horizontal land is land which has no slope and thus all parts of it are on the same level.

A spirit-levelling board can be made up by the local carpenter. The basic materials required are:

- Mark the starting point by means of a benchmark post.

- Place one of the legs of the frame on the starting point.

- Shift the other leg of the frame along the ground until the plank is horizontal (this is checked by means of the spirit level which is fixed to the top of the plank).

- Put a post in place to mark the spot which has been found.

- Repeat the operation to find a third point, a fourth, and so on,

NOTE: Should the retaining bank need to be built with a certain gradient (G), one of the legs of the frame must be extended in height (H) accordingly, so that H/L = G (L being the length of the frame).

The water level enables us to measure the horizontality of a construction.

To make up a flexible tube water level, the following materials are required:

- Make a mark on each of the staves 80 cm from the bottom (check the two against each other to make sure they are identical).

- Place the ends of the plastic pipe level with the top of the staves so that the pipe runs the full length of the staves.

- Attach the tubing to the staves using string or iron wire. Iron wire is more convenient to use as it can be easily manipulated using a pair of pliers.

- Once the level has been put together, place the staves side by side, making sure the marks are exactly opposite each other.

- Fill the tube from one end with water until the level of water reaches the marks on the staves.

- Check that there are no air bubbles in the tube.

- The apparatus is now ready for use.

When transporting the level to the worksite, it is easier to empty the pipe of water and refill it on the spot where it is to be used. For this, a supply of water must be provided.

To avoid water being spilt from the tube when the level is being moved about during the course of the work, put a finger over the ends of the pipe. Alternatively, a cork or stopper may be used as long as one remembers to remove them before re-using the level.

Each time the level is to be used, it is essential to first make sure the water level meets the marks on the staves when the latter are placed at the same height. Add more water if it is required.

Use of the water level

A water level is used to:

- measure the difference in level or height between two given points;

- trace out the contour lines of a slope.

MEASURING THE DIFFERENCE IN LEVEL

Measuring the difference in level

To find the difference in level or height between points A and B:

- Place one of the staves on point A and the other on point B. At the lowest point A, the level of water in the pipe will rise above the mark. At the highest point B, the water level will fall below the mark.

- Using a tape measure, calculate the difference between the water level and the mark on one of the staves.

- The difference in level between points A and B will be equal to twice this difference.

Tracing out the contour lines of a slope

- Put the staves side by side, with the marks on them and the level of the water in the tube at the same level.

- Drive a post into the ground in place of the first stave (A).

- Move the second stave (B), leaving stave A where it is, and place it somewhere else on the slope.

- The water level on stave B is no longer opposite its stave mark.

- If stave B is raised, the water level will fall in relation to the stave mark.

- If stave B is lowered, the water level will rise above the stave mark.

By moving stave B to different locations along the ground, we will discover the place where the two marks meet.

When the water is level with the stave mark, a post is put in place of the stave and this post will thus be on the same level as the first post which marks the place of stave A.

Stave A is then moved to replace stave B and the operation is repeated to locate a third point, C.

This simple piece of equipment enables us to measure differences in level and to trace out contour lines to an accuracy of 2 cm over 100 m.

POINT B HIGHER THAN POINT A

POINT B LOWER THAN POINT A

POINT B LEVEL WITH POINT A