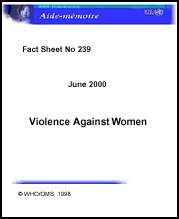 Violence against women and girls is a major health and human rights concern. Women can experience physical or mental abuse throughout their lifecycle, in infancy, childhood and/or adolescence, or during adulthood or older age. While violence has severe health consequences for the affected, it is a social problem that warrants an immediate coordinated response from multiple sectors.

Definition of violence against women

A group of international experts convened by WHO in February 1996 agreed that the definition adopted by the United Nations General Assembly provides a useful framework for the Organization’s activities. The Declaration on the Elimination of Violence against Women (1993) defines violence against women as “any act of gender-based violence that results in, or is likely to result in, physical, sexual or mental harm or suffering to women, including threats of such acts, coercion or arbitrary deprivation of liberty, whether occurring in public or in private life.”

This encompasses, inter alia, “physical, sexual and psychological violence occurring in the family and in the general community, including battering, sexual abuse of children, dowry-related violence, rape, female genital mutilation and other traditional practices harmful to women, non-spousal violence and violence related to exploitation, sexual harassment and intimidation at work, in educational institutions and elsewhere, trafficking in women, forced prostitution, and violence perpetrated or condoned by the state.”

· In every country where reliable, large-scale studies have been conducted, results indicate that between 10% and 50% of women report they have been physically abused by an intimate partner in their lifetime.*

· Population-based studies report between 12 and 25% of women have experienced attempted or completed forced sex by an intimate partner or ex-partner at some time in their lives.*

· Interpersonal violence was the tenth leading cause of death for women 15-44 years of age in 1998.

· Forced prostitution, trafficking for sex and sex tourism appear to be growing. Existing data and statistical sources on trafficking of women and children estimated 500,000 women entering the European Union in 1995.

Most studies on violence against women indicate that:

· the perpetrators of violence against women are almost exclusively men;

· women are at greatest risk of violence from men they know;

Violence against women arises from a combination of individual biological and psychological characteristics as well as social, economic and political factors. The diagram below depicts how the interaction of these individual and social characteristics can constitute protective or risk factors that shape the nature and the consequences of violence.

Measurement of violence against women: data shows only the tip of the iceberg

A public health approach to the prevention of violence against women

Impact of violence against women

Violence against women has serious consequences for their physical and mental health. Abused women are more likely to suffer from depression, anxiety, psychosomatic symptoms, eating problems, and sexual dysfunctions. Violence may affect the reproductive health of women through:

· the increase of sexual risk-taking among adolescents,
· the transmission of STDs, including HIV/AIDS,
· unplanned pregnancies,
· precipitating various gynaecological problems including chronic pelvic pain and painful intercourse.

Consequences such as HIV/AIDS or unplanned pregnancies may in themselves act as risk factors for further aggression, forming a cycle of abuse.

Effects of violence may also be fatal as a result of intentional homicide, severe injury or suicide.

Violence presents an undue burden on the health system:

· Studies from the United States, Zimbabwe and Nicaragua indicate that women who have been physically or sexually assaulted use health services more than women with no history of violence, thus increasing health care costs.

· A U.S. study indicated that rape or assault is a stronger predictor of health care use than any other variable. The medical care costs of women who were raped or assaulted were 2.5 times higher than the costs of non-victims in the year that the study was carried out.

Violence has indirect effects on the society. It represents a drain on the economically productive workforce and generates a climate of fear and insecurity:

· Canada’s national survey on violence against women reported that 30% of battered wives had to cease regular activities due to the abuse, and 50% of women had to take sick leave from work because of the harm sustained.

· A study of abused women in Managua, Nicaragua, found that abused women earned 46% less than women who did not suffer abuse, even after controlling for other factors that affect earnings.

WHO speaks out: action to address violence against women

· Comprehensive database exists on violence against women and girls, including published and unpublished data from around the globe on domestic violence, rape and sexual assault, child abuse and female genital mutilation.

· Multi-country study in 8 countries being implemented on the prevalence, risk and protective factors and health consequences of violence against women.

· Document finalised and disseminated on “Putting Women’s Safety First: Ethical and Safety Recommendations for Research on Domestic Violence against Women”.

· Together with the Centre for Health and Gender Equity, initiated the development and testing of a manual for conducting research on violence against women which aims to capture the collective wisdom of the members of the International Research Network on Violence against Women (IRNVAW), who have undertaken community surveys in resource poor settings.

· Research undertaken in Indonesia, Nigeria and the Philippines on the perceptions and experiences of adolescents with regard to sexual coercion, extending from verbal threats to rape.

· Training of trainers implemented to make primary health care providers and specialists in the rehabilitation of psychiatric patients more sensitive to the mental needs of women.

· Kosovo: A plan of action is being developed to address health needs of women and children affected by violence, including data collection, training, prevention and response, and legal protection.

· Rwanda and Burundi: Accessibility to health services improved for women affected by violence, through local capacity-building and institutional-building. Training will now include integrated services addressing the link between HIV/AIDS and violence.

· Latin America: A co-ordinated network has been put in place in 9 countries to provide comprehensive support to women affected by intimate partner violence, and their children.