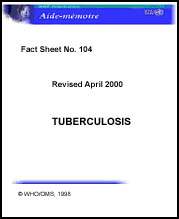 TB is a contagious disease. Like the common cold, it spreads through the air. Only people who are sick with pulmonary TB are infectious. When infectious people cough, sneeze, talk or spit, they propel TB germs, known as bacilli, into the air. A person needs only to inhale a small number of these to be infected.

Left untreated, each person with active TB will infect on average between 10 and 15 people every year. But people infected with TB will not necessarily get sick with the disease. The immune system 'walls off' the TB bacilli which, protected by a thick waxy coat, can lie dormant for years. When someone's immune system is weakened, the chances of getting sick are greater.

· Someone in the world is newly infected with TB every second.

· Nearly one percent of the world's population is newly infected with TB each year.

· Overall, one-third of the world's population is currently infected with the TB bacillus.

· 5 - 10 percent of people who are infected with TB become sick or infectious at some time during their life.