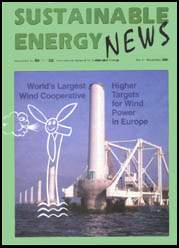 CSD9, One Step Forward or Backward?

In the preparation for the UN Commission for Sustainable Development’s session on energy (CSD9), nuclear and coal are still in the documents. To include these two technologies can be destructive for any attempt to use the CSD9 as a basis for worldwide activities in support of sustainable energy solutions.

If they are not removed from the agenda, we have to question the value of discussing energy at the level of the CSD.

The petition against including nuclear in the CSD9, mentioned in the previous issue of Sustainable Energy News, was supported by a large number of NGOs and was sent to the CSD Secretariat in the UN as well as to the member countries of the CSD. The NGO-protests led to the removal of nuclear power as a topic for the exhibition on Sustainable energy technologies that is proposed as a side-event to the CSD9. So far, the protests have not led to removal of the unsustainable technologies from the CSD9’s agenda. A few countries are strongly advocating the technologies, e.g., Canada has a firm position in favour of nuclear power. The final preparation of the CSD9 will be the meeting of the group of experts in February - March 2001, while the CSD9 itself will be on April 16-27, 2001. These are the remaining opportunities to influence the CSD9.

From the EU, the paper proposed for consideration by CSD9 is entitled “Shared Goals for Global Action”. It calls for governments to introduce a large number of progressive actions, including phase-out of harmful subsidies, factoring environmental costs into energy prices, strengthening the role of civil society in energy decision-making, promoting energy efficiency and renewable energy, and asking multilateral development banks to promote sustainable energy in all sectors. It does not mention nuclear power, while it has a short paragraph on fossil fuels calling for continued development of cleaner and more efficient technologies. 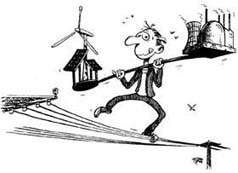 The paper calls for increased North-South and South-South co-operation for sustainable energy, but it does not include specific proposals for the UN system. In general, the many good proposals are very briefly described.

The Sustainable Energy Committee of the UN Economic Commission for Europe made a statement for the CSD9 at its meting, November 2. The European ECO-Forum took part in the development of this multi-stakeholder statement, and so did the coal lobby. The resulting paper calls for increased investments in energy efficiency and renewable energy, and also for cleaner use of fossil fuels. It recognises that no consensus can be made on nuclear.

The International Energy Agency (IEA) and the UN Environmental Program (UNEP) are focusing their preparation for the CSD9 on subsidies. They are doing this with a series of regional consultations entitled “Energy Subsidy Reform and Sustainable Development: Challenges for Policy Makers”. The first workshop is on November 6-7 in Paris, while later workshops will be in Africa, Asia, and Latin America. The workshops will all have NGO representation.

INFORSE and other networks in the CSD Energy Caucus are also working on proposals for the CSD9. As part of this, many have sent statements and success stories to the UN Secretary General, who is collecting such inputs to report at the CSD9. INFORSE has proposed this vision: “to develop energy systems where energy services necessary for a just and human centered development are provided in a sustainable way using renewable energy”.

To do this, we propose “to phase out nuclear energy and fossil fuels, replacing them with renewable energy and energy efficiency”. We should also supply adequate energy resources to the 2 billion people that lack basic energy needs today for, e.g., light and healthy cooking facilities. We propose that this should happen within 50 years.

While the first INFORSE statement was submitted to the UN in October, we continue to develop our vision into a description of how the transformation to a sustainable energy system could look on a world scale. We want to describe how we could reduce greenhouse gas emissions fast enough to avoid climate catastrophes, and at the same time avoid nuclear catastrophes. We invite interested NGOs to join this work in the remaining part of 2000.

The Controversy About Sinks and Energy Options is Heating Up.

The use of biological sinks under the Kyoto Protocol has raised concerns of its impact compared to those of other mitigation options. Opponents consider impossible, at this stage, to develop rules and guidelines that address uncertainty, impermanence, and impacts upon biodiversity of sink projects studied so far. (See Boxes)

The most important argument in favour of renewables is the one about timeliness: reducing emissions is more efficient in order to reverse the consumption trend and prompt the deep changes needed in the carbon economy than is increasing CO2 capture (delaying this process). Hence, renewable energy should be the preferred choice for early action. This long-run approach is now widely accepted.

Even a recent report of World Energy Council (WEC), recommends some policy options for a sustainable Clean Development Mechanism (CDM), e.g. to ensure energy affordability for the poor. It also links greenhouse gas abatement strategies with the natural turnover of capital stock, particularly in developing countries, where most new investment in energy is likely to occur before 2020.

The impending release of the Third Assessment Review of the IPCC will probably add pressure to move towards the replacement technologies for fossil fuels.

Nevertheless, there are many proponents of financing nuclear and fossil fuels (gas, clean coal) via flexible mechanisms. Unless these mechanisms, especially CDM, are clearly committed to renewable-energy technologies at the expense of conventional ones, the potential market for renewables will contract and so will their beneficial effects.

The issue at stake is: which types of energy technologies are eligible for inclusion in the Clean Development Mechanisms?

A CDM exclusive positive list has been proposed by many NGOs. This is a basic basket of all the different forms of renewable energy and well defined energy efficiency measures. Such a CDM positive list should be restricted to the cleanest options at least for the first period of compliance, i.e., before 2008. This would allow renewable energy technologies to offset some of the disadvantages that are due to current failures to include environmental costs in the price of energy delivered.

Life cycle impacts, based not only on power plant operation but on fuel production and transport, waste disposal, and other operations, should be the basis for project assessments. Even more important, there is more to sustainable energy than CO2 or even environmental considerations.

Social goals such as equity and job creation have at least equal merit and should be included in desirable criteria for CDM projects.

The near-future scenarios (2010) show that if we consider the externalities of the classic energy sources and the projected renewables prices we can conclude that renewables technologies will be really cost effective.

We were curious how the motto “Humankind, Nature, Technology” was mirrored in the World’s Exhibition (EXPO 2000) in Hannover concerning energy. We were impressed but also disappointed. 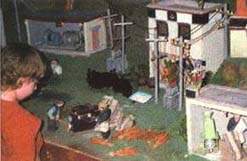 First of all, we looked at the Energy Theme Hall. In the pre exhibition area, an impressive 42-m long and 6-m high screen showed a film about the current energy situation on the Earth. We learned that there are massive problems associated with using fossil- and nuclear fuels. Using more solar and wind energy is unavoidable if we want to meet the energy demand of the growing world population in the 21st century. Walking upward on a long spiral ramp, we arrived to the exhibition area where we, unfortunately, experienced the domination of the traditional energy sources, heavily sponsored by the German industry. While we could go down on a simulated lift in a coal mine or in a natural gas drill, the solar and wind were only represented with a series of displays mainly from pictures sponsored by the Freiburg municipal energy company. Only a few of the many good existing examples were shown. At the end, the message was that “coal, oil, gas will still need to satisfy the main worldwide energy demands within the foreseeable future”, as it also said in the catalogue.

We had expected more visionary approach than this!

We also had expected to see more of the sustainable energy projects proposed for EXPO. (See issue no. 19 and no. 24)

We found some renewable energy applications at the national exhibitions. More over, a drawing exhibition attracted our attention. It featured the best 170 drawings from the 3000 participants of a cartoon competition on “Humankind and Energy” organized by the Goethe Institute. 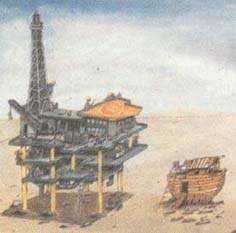 One of the cartoons... The drawings made us think and laugh 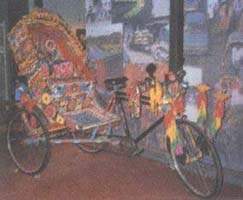 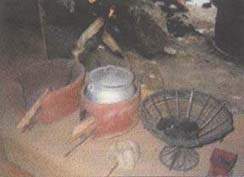 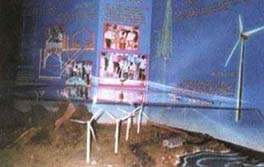 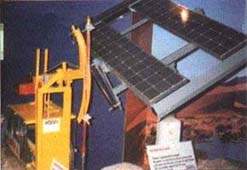 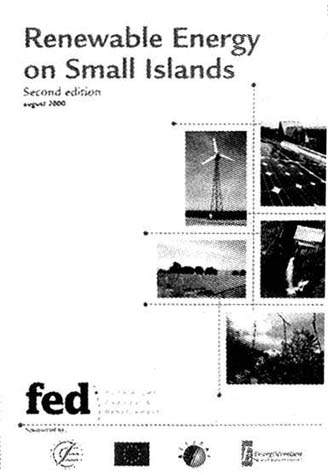 The new report is a little lexicon covering 53 islands’ experiences and plans for renew-able energy. Together with the first edition, which was published in 1998, it gives an overview of 71 islands.

It includes a lot of new cases as well as updates of cases that were in the first edition (1998). However, it is still useful to look into the first edition, because it includes details about 18 islands that are only represented by brief summaries in this new version.

Islands further are in a position to be leaders in RE, adopting highly visible re-search-and-demonstration projects in RE-related technology, organisational methods, and financing.

Globally, there is a need to demonstrate renewable energy in a large-scale (i.e., covering a very large fraction of demand, ed.), integrated, and organised form. This is not possible on mainlands and continents in the short and medium terms, for political, economic, technical, and organisational reasons. Therefore, islands are very important when it comes to the promotion of renewable energy worldwide.

Today, a very few islands already have some of the characteristics of a Renewable Energy Island and thereby use renewables extensively. La Desirade (France), Fiji, Samsoe (Denmark), Pellworm (Germany) and Reunion (France) are currently producing more than 50% of their electricity from renewable energy sources.

All of the mature renewable-energy technologies have been used for electricity production on islands. Whether small or great in area, population, and power systems, in all climates and regions, developing and developed alike, many islands have acquired experience in harnessing some form of renewable energy. Consequently, there is good potential for future co-operation, exchange, and networking among islands, some are already far along the path of converting their energy systems into sustainable energy systems and others have just Started.

The objectives of this overview are:

· to document the feasibility of renewable energy on islands regarding environment, technology, organisation, economics, etc.; and

· to prepare for global co-operation and networking among islands that have decided to become Renewable Energy Islands, i.e., islands that are 100% self-sufficient from renewable energy sources.

The second edition is being financed by the European Commission (SYNERGY-and ALTERNER program), the Danish Energy Agency, and the Forum for Energy and Development (FED).

The report can be downloaded in PDF format (1.6 MB) at the homepage of the Forum for Energy and Development: http://www.energiudvikling.dk/projects_pro.php3?id=19
The price for the report in print is US$ 30 postage included. 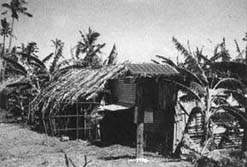 PV Solar Home System on the island of Atata in Tonga.