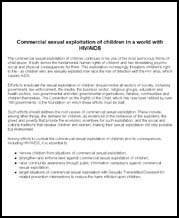 Commercial Sexual Exploitation of Children in a World with HIV/AIDS

The commercial sexual exploitation of children continues to be one of the most pernicious forms of child abuse. It both denies the fundamental human rights of children and has devastating psycho-social and physical consequences for them. This exploitation increasingly threatens children's right to life - as children who are sexually exploited now face the risk of infection with the HIV virus, which causes AIDS.

Efforts to eradicate the sexual exploitation of children should involve all sectors of society, including government, law enforcement, the media, the business sector, religious groups, education and health sectors, non-governmental and inter-governmental organisations, families, communities and children themselves. The Convention on the Rights of the Child, which has now been ratified by over 180 governments, is the foundation on which these efforts must be built.

Such efforts should address the root causes of commercial sexual exploitation. These include, among other things, the demand for children, as evidenced in the behaviour of the exploiters; the greed and poverty that provide the economic incentives for such exploitation; and the social and cultural traditions that devalue children and women, making their sexual exploitation not only possible but widespread.

Among efforts to combat the commercial sexual exploitation of children and its consequences, including HIV/AIDS, it is essential to:

· strengthen and enforce laws against commercial sexual exploitation of children;

· provide psycho-social and health services and support, including HIV-related issues, counselling and care, to children who have been exploited and to their families;

· reduce the vulnerability of children and families to becoming involved in the sex trade by reinforcing their resistance to the lure of gain and helping them withstand the threat of force.

UNAIDS welcomes the Report of the Special Rapporteur on the Sale of Children, Child Prostitution and Child Pornography. All sexual exploitation and abuse, including that involved in the sale of children, their prostitution and their early marriages, increase the risk of infection by HIV. Efforts made to stop these practices should include HIV concerns. Sensitivity training regarding the HIV-related needs of victims should be given to police and to staff from legal, health and social service agencies. In particular, parents and the child victims themselves should receive counselling concerning such difficult issues as voluntary testing for HIV, and should receive support, if a child is found to be positive. Public information campaigns against child abuse and sexual exploitation, as well as education campaigns aimed at families, children and adolescents, should explain the risks of infection, means of protection, and services available, if infection does occur.