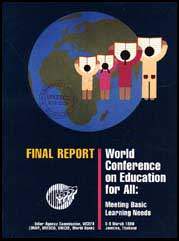 In February 1989, the executive heads of the United Nations Children's Fund (UNICEF), United Nations Development Programme (UNDP), United Nations Educational, Scientific and Cultural Organization (UNESCO), and the World Bank agreed to convene jointly and sponsor the World Conference on Education for All - Meeting Basic Learning Needs (now widely known by its acronym, WCEFA). Scheduled early in International Literacy Year (ILY 1990), the Conference was intended to launch a renewed worldwide initiative to meet the basic learning needs of all children, youth and adults, and to reverse the serious decline in basic education services observed in many countries during recent years.

The four sponsoring agencies established and funded an Inter-Agency Commission (IAC), with an Executive Committee representing the four and a small Executive Secretariat, hosted by UNICEF at its headquarters in New York, to prepare and organize the Conference. The Royal Government of Thailand kindly agreed to host the conference at Jomtien, from 5-9 March 1990. As the initiative became known, eighteen governments and organizations joined in supporting it as co-sponsors and associate sponsors by contributing financial, material and intellectual support. (See inside front cover.)

In order to mobilize support and to consult with governments, major nongovernmental organizations (NGOs) and other interested parties in countries around the world prior to the Conference, the IAC Executive Secretariat undertook to organize, with the valuable cooperation of the field offices of the four core Sponsors and regional planning task forces, a series of nine regional consultations, as well as a consultation of major funding agencies (see the calendar of these consultations: Box 1.1). The IAC also established an International Steering Group, comprising members nominated by the various sponsors, together with a number of distinguished individuals from each region of the world (see Annex F); this advisory body met once prior to the regional consultations, a second time immediately afterwards, and twice at Jomtien, before and after the Conference.

While each consultation had its own agenda and programme, they all examined the draft text (Draft B) of two working documents, the World Declaration on Education for All (originally entitled "World Charter...") and the Framework for Action to Meet Basic Learning Needs. (The Jakarta Consultation reviewed Draft C). Each consultation formulated comments and suggestions for their revision, and the Executive Secretariat met with the rapporteurs to obtain their advice on the perspectives and major concerns of all the regions that needed to be reflected in Draft C, which was then submitted to the World Conference for final examination and adoption. (See Appendices 1 and 2 for the texts of these two complementary documents as adopted by the Conference.)

Furthermore, many countries established national committees or task forces during 1989, often with the active participation of NGOs, to design or update a national strategy to develop basic education and to prepare for the ILY and WCEFA. A large number of international and regional NGOs were also active in the consultation process, commented on the working documents and helped the IAC to raise awareness of the issues involved in the Education for All initiative. This partnership of governmental authorities, intergovernmental agencies, and nongovernmental organizations is a very significant characteristic of the Education for All initiative.

Although this initiative was initially focussed on the World Conference, there was unanimous agreement in Jomtien that the initiative must continue far beyond the Conference, until the basic learning needs of all children, youth and adults are effectively met in all countries of the world.

The World Conference on Education for All had three principal objectives:

1. to highlight the importance and impact of basic education, and renew commitment to make it available to all

2. to forge a global consensus on a frame-work for action to meet the basic learning needs of children, youth and adults;

3. to provide a forum for sharing experiences and research results to invigourate ongoing and planned programmes.

The structure of the Conference (see Programme, page 3) was designed to meet these objectives through:

· an Inaugural Session, followed by an Opening Plenary Session;

· a Plenary Commission for general discussion regarding the content of the two working documents (World Declaration on Education for All and Framework for Action to Meet Basic Learning Needs);

· a Drafting Committee which examined proposed amendments to the two working documents and reported its conclusions to the Plenary Commission at its final session;

· two series of autonomous roundtables on major issues concerning education for all: (i) 24 thematic roundtables dealing with issues which concern many countries, and (ii) 24 illustrative roundtables presenting the experiences and plans of particular countries and organizations; (see the list of roundtables in Annex B);

· some 70 exhibits on subjects relevant to the theme of the Conference; (see the list of exhibits in Annex C);

· a host country day, in which participants had the opportunity to visit educational and cultural institutions around Jomtien; and

· a Closing Plenary Session, at which the final text of the World Declaration and the Framework for Action, as approved by the Plenary Commission, were formally adopted by the Conference; (see the approved texts in Appendices 1 and 2).

Simultaneous interpretation into the six UN languages (Arabic, Chinese, English, French, Russian and Spanish) was provided for the plenary sessions, the Plenary Commission, and the meetings of the Bureau and Drafting Committee. The working documents of the Conference were also available in these languages. The working languages of the round-tables were English and French, with provisions for interpretation from one or more of the other four languages into English and French.

Participation in the Conference was by invitation issued by the Inter-Agency Commission. Member States of the United Nations, UNESCO and the World Bank were invited to send a ministerial-level delegation of three to four persons. A number of intergovernmental bodies and nongovernmental and media organizations and institutes were invited to send one delegate each. In addition to the 900 delegates, the Conference Secretariat registered about 200 observers and accredited some 190 press correspondents; altogether, with Conference staff and programme personnel, over 1500 people from all parts of the world met in Jomtien. (See Box 1.2)

The King of Thailand was represented at the Inaugural Session on Monday morning, 5 March 1990, by H.R.H. Princess Maha Chakri Sirindhorn, who officially opened the Conference, after a formal statement by the Deputy Prime Minister of Thailand, H.E. General Tienchai Sirisumpan. The Executive Secretary of the Conference, Mr. Wadi D. Haddad, then presented the Education for All initiative and the theme film by that title.

At the Opening Plenary Session held immediately afterwards, a message from the Secretary-General of the United Nations was read by his representative, Mr. S.A.M.S. Kibria, Executive Secretary of ESCAP; and the Director-General of UNESCO, Mr. Federico Mayor, addressed the Conference on behalf of the four core Sponsors of the WCEFA. Three invited heads of state, each from a different region of the world, addressed the Conference: the President of Bangladesh, H.E. Mr. Hussain Muhammad Ershad; the President of Ecuadoro H.E. Mr. Rodrigo Borja Cevallos; and the President of Kenya, H.E. Mr. Daniel arap Moi. Chapter 2 provides a summary of the interventions during this plenary session.

The delegates then elected a President, eleven Vice-Presidents, and two Co-Rapporteurs-General; these officers, together with the executive heads of the four core Sponsors and the Executive Secretary of the Conference, constituted the Bureau of the Conference (see list in Annex E) to guide its work to a successful conclusion. The composition of the Bureau reflected the geographical representation of the delegates and included one Vice-President nominated by the non-governmental organizations present.

The 48 roundtables, scheduled four at a time during twelve 90-minute sessions, provided opportunities for participants to discuss issues and exchange experiences around a large number of technical topics and specific cases presented by panels of specialists using various audio-visual supports. A summary of the round-table discussions is given in Chapter 4. The exhibits, many of which also offered audio-visual presentations, provided supplementary information on these and other related topics.

The Plenary Commission sought to build consensus on the central issues involved in the Education for All initiative. It met for six sessions during the Conference, providing a forum for the heads of delegations to speak on these general issues and more specifically about the draft texts of the World Declaration and the Framework for Action. The Commission also heard major policy statements by the President of the World Bank, Mr. Barber Conable; the Executive Director of UNICEF, Mr. James Grant; and the Administrator of the United Nations Development Programme, Mr. William Draper III. In addition, the President of the Maldives addressed the Commission on 7 March. A synthesis of the interventions made in the Plenary Commission is presented in Chapter 3.

These texts subsequently were adopted unanimously by the Conference at the Closing Plenary Session on 9 March 1990. At the invitation of the Acting President of the Conference, H.E. Mr. Josef Hromadka, Deputy Prime Minister of Czechslovakia, the participants affirmed their commitment to the principles and goals of the World Declaration and the Framework for Action by reading aloud the final paragraphs of the World Declaration. They also endorsed by acclamation a short statement on "Follow-up to the World Conference on Education for All" (Appendix 3) which had resulted from extensive discussions during the Conference, involving all groups of participants. Calls for action based on the consensus reached at the Conference, were made by three speakers: Dr. Anil Bordia (India), speaking on behalf of the Asia and Pacific countries; H.E. Mr. Alaziamina Nzege (Zaire) speaking on behalf of the African countries; and Ms. Evelyn Kurihara Philbrook, speaking on behalf of the NGOs present. Closing statements were then given by: the Minister of Education of Thailand, H.E. General Mana Ratanakoses; the Director-General of UNESCO; the Executive Director of UNICEF; the Executive Secretary of the Conference; and the Acting President of the Conference. Following the Vote of Thanks, proposed by the Minister of Education of Jamaican H.E. Senator Hon. Carlyle Dunkley, and a brief musical performance by a Thai dance group based on the WCEFA theme song, the Acting President formally closed the Conference. 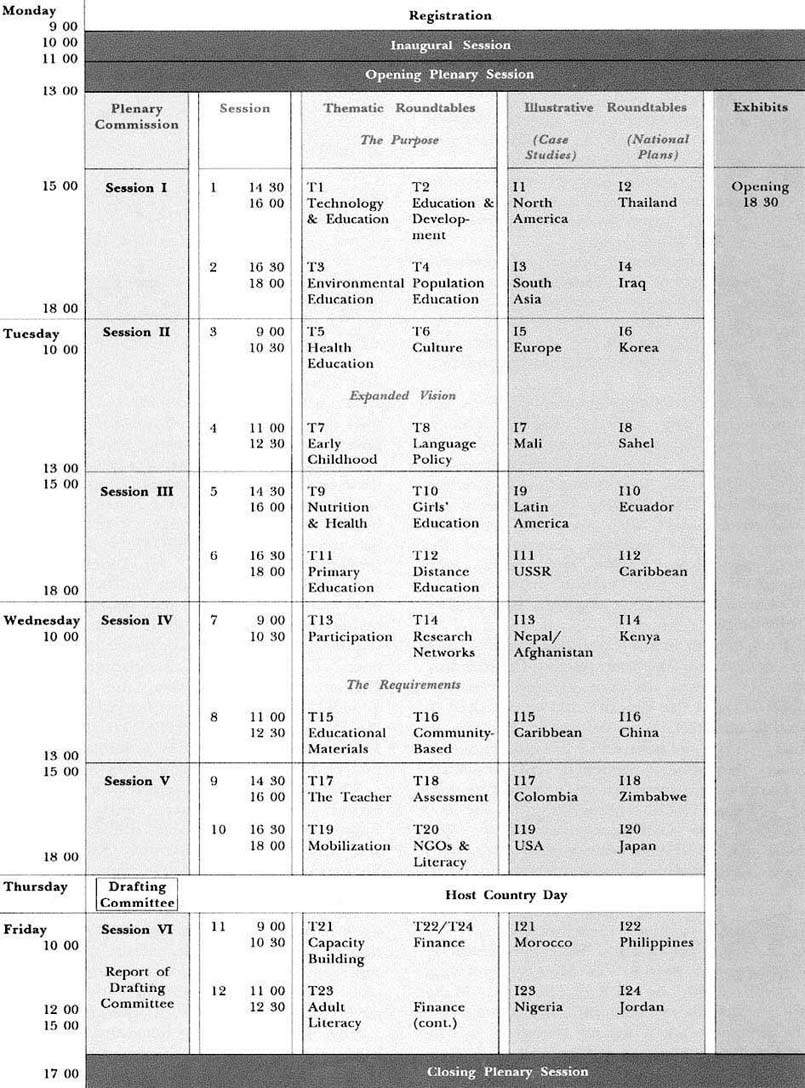