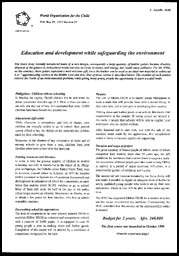 Water - as precious as gold

In 1998 and again in 1999, the Latin Convent in Karak, in Southern Jordan, a school with 750 pupils, was obliged to curtail the school year by a month, owing to a severe water shortage. The problem is of constant concern to the 160,000 people living in the area, due partly to the irregularity of deliveries by tanker truck from the Ministry of Irrigation and partly to the high costs of delivery. The director of the Latin Convent, Father Jaar, who holds a doctorate in history, made a study of the thousands-year history of Karak. Situated at 950 metres altitude, this strategic stronghold has an imposing fortress encircled by ramparts. It was occupied successively by the Moabites, subjects of the famous Kings of Moab, by the Romans and by the Crusaders, all of whom chose it mainly because water reserves there were plentiful, and were renewed each year during the rainy season. With these facts in mind, Father Jaar began to explore the cellars of the school, which is housed in a former monastery. Very soon he discovered an empty cistern, with a pulley, dating from the Roman era, about 17 metres below the ground and capable of holding 240 cubic metres of water - the equivalent of an Olympic-size swimming pool measuring 50 x 25 x 2 metres.

The population of Karak, probably among the poorest in Jordan, has suffered for years from the inadequate water supplies.

In Father Jaar's opinion, it is imperative to find an effective and lasting solution to the worrying problem. He proposes that the cistern be thoroughly cleaned, the stonework and the steps giving access to the cistern repaired, the stone water channels dating from Roman times restored or, if this is not possible, replaced, and a pump installed.

To fill the cistern during the rainy season, thus reducing the costs of water deliveries by tanker truck and eliminating the uncertainty of supplies.

To encourage the inhabitants to restore the Moabite and Roman cisterns, by supplying surplus water to them once the Latin Convent cistern has been renovated.

Start of work and maintenance of the cistern

The rainy season lasts from the end of September to mid-January. To ensure that this season is not missed in 1999, the WOC has given the go-ahead for work on the cistern to begin. When the work has been completed, maintenance of the cistern will be the total responsibility of the Latin Convent.

All 750 children to help

Each pupil of the school will play a part in the restoration of the cistern, by carrying a few stones or buckets of sand or water. These symbolic gestures will make them aware of the value of water.

Identity and administration of the Latin Convent

The establishment, which is Catholic, specializes in schooling and vocational training. It is recognized by the State and, in particular, by the whole of the local community, which is 95% Muslim, since it accepts pupils without discrimination. The WOC has supported this school since 1991.

The great majority of former pupils remain loyal to the institution that enabled them to acquire a trade or a skill. An association of former pupils, parents and sympathizers is active to ensure the survival of the Latin Convent, either by donations or by services. In addition, former apprentices have already succeeded in setting up their own workshops, where in their turn they train other young people.

Father Jaar, the director of the Latin Convent, is Palestinian, born in Jerusalem 45 years ago. After organizing an educational centre at Zarka, near Amman, and directing it with great competence, he was transferred to Karak, his present teaching post.

This project demonstrates the willpower and the enterprise of the WOC's, partners in the field, and proves that it is possible to foster lasting enthusiasm and efficiency with minimum cost.

Project: restoration of a Roman cistern

Thanks to you, we have the joy of a water supply once more: your efforts and your generosity have freed us from a worry that haunted us day and night - «THERE'S NO WATER '»

For the Roman cistern underneath our school (a former convent) has been restored and reconditioned to store rainwater. And today came the first shower of the rainy season that announces winter. As the water began to fall from the sky, we shed tears of emotion, and all those in the school rejoiced at our success. So 1 am very happy to be able to send you this final report telling how the work was carried out and how your contribution was used.

1st stage: With two pumps that we had bought, the water that had lain for long years at the bottom of the cistern was pumped out; it took 3 days of hard work.

2nd stage: 1 had to go down first into the cistern, to inspect the state of it, since nobody had dared to do so before. So, at the end of a rope, I began to lower myself by muscle power. Halfway down, I felt fatigue and fear such as I had never known before. The rope was beginning to slip between my hands, I did not know how much further I had to go down, nor «what awaited me at the end» - and so on. My imagination made me tremble with fear. However, once I had recovered my breath, I continued the descent and found myself sinking in the mud. It came up to my knees, then 1 touched bottom, so that fear and trembling gave way to curiosity. I called to the workmen, who had remained above, and they began to come down carefully, one by one. They began the work of removing the mud and cleaning the cistern, which took a whole week. After that, wooden scaffolding was put up, for repairing the walls. Seen from inside the cistern, the extent of deterioration was much greater than it had appeared when viewed through the narrow opening at the top.

3rd stage: The foreman and the workmen installed the pumps and piping for the water supply to the school. They then set the safety controls, to shut off incoming water when the cistern is full. They disinfected the cistern, whitewashed the passageway leading to it, installed the lighting, and put up a steel entrance door.

The project was completed before the winter rains came. This pioneering project, needless to say, has provided a good example to the people of Karak: everybody is talking about it, and the newspapers have reported it. Karak is surrounded by desert, and there are many disused cisterns that could be restored to use, to resolve the serious shortage of water. People in Karak are now beginning to realize this, and come to ask our advice.

We must not forget the 750 pupils in our school: they worked with small hands but with huge enthusiasm, carrying little buckets filled with sand, water and gravel, or helping in various ways. They will get their reward in the dry season. All this was made possible by the WOC and its donors!!!

We will invite His Excellency the Swiss Ambassador to Jordan to the inauguration of the cistern. I look forward with pleasure to the visit of a representative of the WOC, to inspect the accounts and the restoration work on the cistern, and to celebrate with us this wonderful feat, which could be accomplished only thanks to the WOC.

We pray that the Good Lord will reward you all with good health. 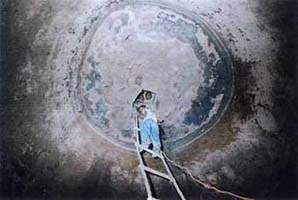 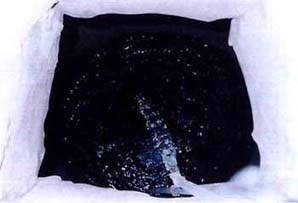