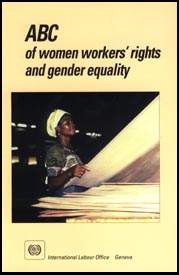 Governments should develop, with the participation of the peoples concerned, coordinated and systematic action to protect the rights of these peoples and to guarantee respect for their integrity. Efforts should be made to ensure that they benefit on an equal footing from the rights and opportunities which are granted to other members of the population, with respect for the social and cultural identity of the peoples in question as well as their customs and institutions. Special measures - which cannot be contrary to their freely expressed wishes - should be implemented to safeguard the individuals, institutions, property, labour, cultures and environment of the peoples.

Indirect discrimination is a kind of discrimination which is evident not at first glance but only after having analysed the de facto effects of policies or legal provisions. A law, regulation, policy or practice may appear to be "neutral" by not making a distinct difference between women and men, but in fact may result in unequal treatment of persons with certain characteristics. Any treatment that, in practice, leads to disadvantages for the members of just one sex constitutes "indirect discrimination" if the negative effect is not closely related to the inherent requirements of the job.

Indirect discrimination may occur when criteria used in job advertisements are not essential to job performance. Examples are job requirements or criteria for pay which are seemingly neutral (such as minimum height and weight), but in practice exclude a considerable percentage of female workers. Because of stereotypes concerning the distribution of "male" and "female" tasks, indirect discrimination affects women particularly in access to employment and vocational training, especially in technical sectors, and career advancement. These stereotypes ought to be addressed by suitable measures.

Other essential elements are:

· the modification of work organization and distribution of tasks to avoid negative effects on the treatment and advancement of women; and

· the adoption of measures (such as social services accessible to all workers) to allow a balance in sharing family and professional responsibilities between the sexes.

There is no universally accepted definition of the informal sector. Normally, this term is used to describe economic units which are operating totally or partially outside the formal, institutionalized economic structure. The following characteristics are frequently found: family ownership; small scale of operation; labour-intensive and adapted technology; and reliance on indigenous resources. Informal work may cover a range of diverse situations including own-account small businesses, family enterprises, retail trading, street vending, home work and certain forms of subcontracting.

There is evidence that profound changes are taking place in the processes which give rise to informal activities, and in the way they operate and fit into national economies. It is no longer true that goods and services in the informal sector are produced only for local consumption in low-income households. Links with formal-sector enterprises and with international markets, through subcontracting arrangements, have clearly increased.

Women are disproportionately and to a growing extent represented in the informal sector. Such work is an essential source of employment and income for many women workers who face occupational segregation, unemployment and underemployment, and for their families. They are mainly engaged in subsistence labour and informal activities linked to the new tradable sectors. Although they usually bear the costs of setting up their informal activity, they do not always control the benefits, which may be appropriated by male relatives.

· improving productivity, and employment- and income-generating capacity, through access to credit, technology, and training;

· establishing a regulatory framework, including appropriate forms of social protection;

· encouraging the organization of informal sector workers; and

· addressing the problem of guaranteeing fundamental rights for all workers, including equality issues.

Workers should be protected in the case of inability to engage in any gainful activity that is likely to be permanent or that persists after the exhaustion of sickness benefits. The benefit should be a periodic payment guaranteed to protect a person who has completed a qualifying period of contribution or employment. A reduced payment may be paid in other cases.