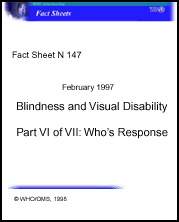 The World Health Organization (WHO) has always been conscious of the fact that blindness and visual disability are a public health problem. However, for a long time, the magnitude of this problem could not be assessed, and meaningful global prevention activities could not be initiated because of lack of epidemiological data and information.

Consequently, the first task faced by the WHO Programme for the Prevention of Blindness (PBL), created in 1978, was to prepare reliable estimates of prevalence of blindness and visual disability worldwide.

· In response to this challenge, PBL developed internationally accepted simple population-based assessment methodologies to measure prevalence of visual loss and its causes. Based on standard low-cost, small-scale field surveys conducted mainly by trained non-specialist staff, these methodologies were used in WHO Member States to arrive at national estimates of prevalence of blindness and visual disability.

· On the basis of national data, regional and global estimates were prepared and used in the development of the WHO Global Data Bank on Blindness, a necessary tool for planning international action against blindness.

· At the same time, in cooperation with leading scientists, institutions and collaborating organizations, WHO developed strategies and technical standards for control of specific blinding diseases. Over the years, these strategies gained worldwide acceptance. Scientifically based, field-tested and regularly updated, today they have been adopted by governments, international organizations and NGOs. They include:

* The “SAFE” strategy for the elimination of trachoma. “SAFE” stands for Surgery for trichiasis (inturned eyelashes), Antibiotics, Facial cleanliness and Environmental improvement. It consists of a combination of community-targeted public health interventions which seek community involvement through the primary health care approach. An estimated 146 million people are expected to benefit from the implementation of this strategy.

* Another example of a successful PBL-developed strategy is the provision of cataract surgery as part of primary health care. This strategy is based on the establishment of sustainable and affordable services that use appropriate technology.

* Prevention of blindness from glaucoma and diabetic retinopathy is based on raising professional and public awareness. Even in developed countries, only 50% of people affected by these diseases are aware of their conditions.

* WHO has been actively assisting its Member States in the planning, establishment, monitoring and evaluation of national programmes for the prevention of blindness in which the emphasis is put on eye care provision as an integral part of primary health care. Currently, there are around 100 such programmes in different stages of development.

· As more reliable data have become available and new strategies to fight the world’s blindness have evolved, understanding has been growing that blindness and visual disability can be tackled only through concerted actions by governments, international organizations, national and international nongovernmental development organizations (NGDOs) and the pharmaceutical industry. Therefore, WHO has been working to create a global coalition involving all parties interested in fighting blindness:

* PBL has been strengthening cooperation with and bringing together international NGDOs within a global network active in blindness prevention. A Partnership Committee with a Task Force have been set up for the exchange of information and joint activities in developing countries where the NGDO network is spending some US$ 80 million per year. This is by no means sufficient, and the network is making efforts to mobilize additional resources.

* The “SAFE” strategy has become the operational basis for the formation of a WHO-led international alliance of governments, international organizations and NGOs for the elimination of trachoma.

* WHO is cooperating with the World Bank which has made available some US$ 120 million for improving cataract surgical services in seven states within the framework of the Indian National Programme for Control of Blindness (NPCB).

* WHO and other organizations involved in the prevention and control of blindness are making concerted efforts to expand their partnership with the pharmaceutical industry. Merck & Co. - the manufacturer of ivermectin - is making the drug available, free of charge, to all onchocerciasis endemic countries. It is a perfect example of the role industry can play in disease prevention and control. There are other tropical diseases, for instance trachoma, where a similar formula would be of great benefit to world health.

· WHO acts as the Executive Agency for the Onchocerciasis Control Programme (OCP) which, since its inception, has been jointly sponsored by WHO, the World Bank, the United Nations Development Program (UNDP) and the Food and Agriculture Organization (FAO) and is supported by a coalition of 22 donor countries and agencies. The World Bank is responsible for mobilizing resources and administering the OCP Trust Fund.

* As a result of OCP’s implementation, some 1.5 million people, who were once infected with onchocerciasis, no longer have any trace of the disease and are not at risk of becoming blind. About 10 million children born in the area since the programme’s inception are now free of any risk of contracting the disease. By the turn of the century, it is estimated that OCP will have prevented almost 300 000 cases of blindness in the 11 countries involved in the programme.

· WHO also executes the newly created African Programme for Onchocerciasis Control (APOC), covering the remaining 19 endemic countries in Africa: Angola, Burundi, Cameroon, Central African Republic, Chad, Congo, Equatorial Guinea, Ethiopia, Gabon, Kenya, Liberia, Malawi, Mozambique, Nigeria, Rwanda, Sudan, Tanzania, Uganda, Zaire. The World Bank has been a driving force behind the creation of this programme. The Bank has estimated the total cost of APOC at US$ 120 million, to be dispensed over a projected period of 12 years. APOC’s aim is to establish sustainable community-based ivermectin treatment activities that will eventually result in the elimination of onchocerciasis as a public health and socioeconomic problem throughout Africa. The new programme works in collaboration with a consortium of NGDOs set up by the WHO Programme for the Prevention of Blindness.

· The Pan-American Health Organization (the WHO Regional Office for the Americas) is co-ordinating a programme to eliminate onchocerciasis as a public health problem in six endemic countries: Brazil, Colombia, Ecuador, Guatemala, Mexico and Venezuela. This will be done with the support of NGDOs and the Inter-American Development Bank.

· Through its Action Programme for the Elimination of Leprosy, WHO oversees resource mobilization, monitors and evaluates activities in each endemic country, and generally coordinates activities towards the elimination of leprosy worldwide. Today, the disease remains endemic in 60 countries. Sixteen of them are rated as “the most endemic countries” and account for 90% of all leprosy cases. They are: Bangladesh, Brazil, Cambodia, Ethiopia, Guinea, India, Indonesia, Madagascar, Mozambique, Myanmar, Nepal, Nigeria, Philippines, Sudan, Tanzania and Zaire.

· WHO and UNICEF are promoting the Global Child Survival Initiative, which includes the elimination of vitamin A deficiency and its consequences, including blindness. Immunization against measles is also expected to contribute to preventing blindness in children.