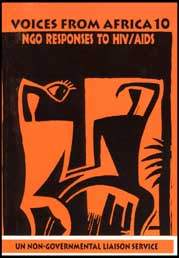 Ang Zo Angono is a social worker with SIDA Service in Senegal.

Catherine Campbell is a Reader in Social Psychology at the London School of Economics, and Co-Investigator of the Carletonville-Mothusimpilo Project in South Africa.

Moses Chingono is with the National Employment Council for the Transport Operating Industry (NECTOI) in Zimbabwe.

Anne Fiedler is with the Straight Talk Foundation, based in Uganda.

Janet Frohlich is Project Director for the Vaccine Preparedness Study at the Medical Research Council based in South Africa.

Keith Goddard is Programmes Manager of the organization Gays and Lesbians of Zimbabwe (GALZ).

Eleanor Gouws is Principal Investigator for the Vaccine Preparedness Study, and Senior Statistician at the Medical Research Council based in South Africa.

Moustapha Gueye is Director of the African Council of AIDS Service Organizations (AfriCASO) in Senegal.

Catherine MacPhail is a Social Scientist at the Centre for Scientific and Industrial Research, and is associated with the Carletonville-Mothusimpilo Project in South Africa.

Adriano Rostino Matsinhe is President of Kindlimuka, an association of people living with AIDS in Mozambique,

Salimata Niang is with the Society for Women and AIDS in Africa, based in Senegal.

Sam L.J. Page is with African Farmers’ Organic Research and Training, based in Zimbabwe.

Brian Williams is Principal Investigator of the Carletonville-Mothusimpilo Project, and Divisional Fellow at the Centre for Scientific and Industrial Research based in South Africa.

Regina Clement Akpan is Project Manager of the Life Link Organisation, based in Nigeria.

Esther Guzha is Chief Counsellor at The Centre, a Zimbabwean AIDS Service Organisation.

Aristide Kacou is Project Coordinator of Lumi Action, based in Cd’Ivoire.

Victor Kamanga is National Coordinator of the Malawi Network of People Living with HIV/AIDS (MANET+).

Dora Ofobrukweta is Project Manager of the Life Link Organisation in Nigeria.

Mariette Wandandi is founder of the People Affected by HIV/AIDS Organization (PAHO), based in the Democratic Republic of Congo.