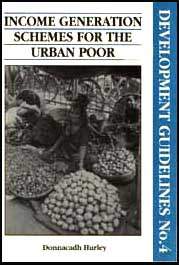 There is considerable confusion amongst development workers concerning the term 'income generation'. It is used to describe initiatives as diverse as women's awareness-raising groups, small business promotion schemes, cooperative shops, job-creation schemes sewing circles and youth training programmes. It also appears that, in a very large number of cases, income generation is not the primary objective of the initiative.

At a different level, confusion arises because many people associate income generating prograrnmes with a particular development ideology. In many cases, individuals and organisations involved in income generation interventions view poverty as a consequence of an individual's lack of capital or training, and equate achieving better income with development'. This approach often implies an emphasis on the deficiencies of poor people rather than the economic and social system under which they live, and is at the heart of many small--scale local income generation interventions and more highly capitalised development schemes. On the other hand, those who see the poor as being at the sharp end of a system of political economy founded on unfair exploitation often reject strategies which try to increase incomes at an individual level without paying attention to the powerful processes causing poverty

This book takes the view that income generation interventions are indeed inadequate as a total development strategy because they fail to address the most fundamental causes of poverty. Rather, income generation interventions are mechanisms that can be used as tools, to contribute towards development in appropriate situations. They represent only one aspect of development work, one set of tools among many, and their use should not constitute an excuse to ignore socio-political aspects of poverty alleviation or the underlying causes of poverty.

There are countless factors in a society and its economy that work together to maintain poverty. Changes in such things as education and health care provision, legal and political systems and the global economic framework can all affect the ability of people to secure an income. Interventions in many spheres may directly or indirectly influence the income of individuals. From this stems much of the confusion in the use of the term 'income generation' mentioned above. This book defines income generation interventions as development interventions that intervene in the economic aspect of people's lives using economic tools. Such tools are usually small-scale, operating at the level of the community or individual business or co-operative, and may include such things as the provision of capital through grants or loans; savings and credit schemes; training or advice in skills or business management and other support services for small business such as assistance with marketing and the provision of temporary trained personnel.

Furthermore, this book emphasises that development agencies must take seriously the central economic objective of income generation interventions. The interrelationship of economic and social objectives must be carefully assessed in open discussion between interveners and participants and there must be sufficient flexibility to allow priorities to change over time. The importance of practical analysis, based on the impact of the intervention on the lives of participants and other poor people in the neighbourhood or community rather than on assumptions, preconceptions and ideological preferences of interveners is emphasised. The complexity of poverty and the power of the forces underlying it are stressed and interveners advised that assisting people to improve their incomes in ways that are eventually sustainable without outside support is not easy. Interveners must critically assess their own ability and preparedness to support income generation in this difficult context and either put resources into acquiring or developing the requisite skills and experience or decide that income generation is not the field in which they can give most effective assistance.

This book is primarily concerned with income generation in the context of urban poverty although much of the debate and advice and many of the points are equally relevant in rural areas and indeed several rural examples have been used. The focus is urban because we felt that most previous work has focussed on rural poverty and income generating activities, and there is still a lack of experience amongst development agencies of working with the urban poor, despite the growing needs and size of the urbanised populace.

There has been a traditional tension between formal, national economic planners, who often disregard the contribution of people in the informal sector to the national economy. A great deal of emphasis has been placed on the parasitic nature of the informal sector; as people do not pay tax, the sector is accused of not contributing to the national economy so it is classed as not being productive. This thinking has also provided the impetus for programmes which see the challenge as being merely to create 'employment opportunities' without recognising the real contribution of the informal sector to prosperity. (Socialist regimes, for example, often create jobs and incomes without necessarily increasing production or productivity; hence the risks of centrally planned economies which may neglect economic factors, leading to low productivity.) Whereas there is increasing evidence that the informal sector is often crucial to the health of the formal sector by, for example, the production of components for assembly, the use of outworkers by large companies, etc. Even in Japan there is considerable evidence of what would appear to be hi-tech industries being supported by large numbers of women and children outworkers. There are many other ways in which the informal sector contributes considerably to national economies as well as to the survival of large numbers of people.

The book is in four sections. Section I is concerned with the two parties to the intervention relationship, the urban poor and those who intervene with them on their behalf. Section II considers various issues which arise in the context of income generation. Section III contains specific recommendations for interveners wishing to actively pursue income generation initiatives, and looks at the need for economic appraisals and appropriate financial management techniques. The final Section considers various options open to interveners and offers suggestions for a variety of ways of facilitating income generation. The points made in each section are summarised as a list of conclusions at the end of that section. There is an annotated bibliography giving suggestions for further reading.