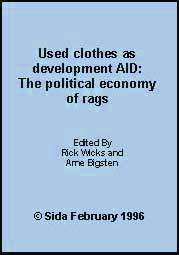 Producer organizations and labor unions are vociferous in protest against such "unfair" competition, but most countries have no exceptional restrictions against used-clothes imports. Swedish NGOs exporting used clothes have in the past sometimes attempted to target "the poorest of the poor", and other times have allowed used clothes to be sold somewhat arbitrarily, but now most organizations are using the market to maximize the return on used-clothes sales, and are using the proceeds for development purposes.

Under simple "ideal" conditions, used-clothes imports into LDCs should theoretically allow an increase in real income. However, the loss of possible positive externalities associated with textile or clothing production, or increased unemployment of labor and capital if factor markets are not functioning well, could cause net welfare losses. Empirical analysis of results would require rather complex study; the one actual detailed study which exists shows net gains from used-clothes imports, but is based on a special case (a country with no domestic textile production). Popular attitudes in LDCs seem generally positive, as cheap and "stylish" goods are made available, and much employment is generated in cleaning, repair, restyling, and distribution. Clothes and other goods have of course been much re-used throughout history in many parts of the world, including now in the industrial countries.

Subsidizing used-clothes exports (and thus increasing the volume of such exports) would increase any resulting damages, unless there were no effective demand (people too poor to enter the market), or no supply (as might happen during wartime, for instance). If people are too poor to enter the market, they need many things, so probably they could be better served by income-generating development projects (perhaps funded at least partly by unsubsidized used-clothes sales), rather than by subsidized used-clothes distribution, which is expensive and inefficient. There may be a role for subsidized used-clothes exports in disaster relief, although many international NGOs are somewhat skeptical about their value even here.

Thus we believe - and evidence supports - that re-using second-hand clothes is in general a good thing, and probably has economic benefits. Nevertheless, theoretical analysis - somewhat supported by empirical evidence - shows that in the real world situations encountered in most LDCs, used-clothes imports may cause economic damage. Subsidizing imports of used clothes for aid projects would increase this damage.

Even in the case of targeting "the poorest of the poor", who have no effective demand, more effective, better-targeted aid projects are possible. In catastrophe situations, where supply and/or distribution have broken down, there may be a need for subsidized imports of used clothes (although cheap new clothes may be more appropriate and more efficient for the purpose).

Thus we recommend the following policies regarding Sida subsidies for NGO export of used clothes:

1. In general, no subsidies should be given for export of used clothes, particularly if the clothes are to be sold on the market. If the organizations or projects which would have benefited financially are judged worthy of support, such support should be given directly.

2. In the case of targeting particular population groups - "the poorest of the poor" - more effective, better-targeted projects should be encouraged.

a. NGOs should be encouraged to sell their surplus used-clothes stocks into the commercial "rag merchant" network - as is widely done in most other industrial countries.

b. The proceeds, plus whatever subsidies Sida might have given for used-clothes exports, should be devoted to projects.

3. In catastrophe situations, freight subsidies for used-clothes exports should be given only as a last resort - if no better and more immediate source of supply is available. NGOs should be encouraged to find supplies as close to the scene as possible; the use of cheap new clothes should be explored for this purpose.

4. In any cases in which subsidies for used-clothes exports are given, plans should be scrutinized, and results monitored, with the following questions in mind:

a. In catastrophe situations, how has it been ascertained that local production and other closer sources are insufficient to meet the need?

b. Have other alternatives been explored - such as importing from neighboring countries, commercial imports of used clothes, etc.?

c. If used-clothes are to be used for project aid with "the poorest of the poor", how are the target groups to be selected? How will distribution be monitored to be sure that they are in fact the recipients?

d. How has it been determined that they in fact have no presence in the market?

e. How were their needs ascertained? Is their highest priority used clothes? Or, for example, would they rather have the cash? If so, is there any other project possible - perhaps an income-generating project - which could more effectively use the financial resources and volunteer effort available?

f. How will the clothes be sorted to make sure that they match local needs?

g. Will the recipients be monitored to discover if there is any resale activity?

5. Any changes from current policy should be made in a carefully planned manner, so as not to lose the benefits which undoubtedly do accrue from subsidized charitable exports of used clothes, and which might be lost without compensating gains if policy changes are made precipitously.