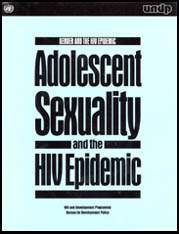 Epidemiological studies across the developing world show that young people are not equally affected by HIV/AIDS. Rather, those who are most socially and economically disadvantaged are at highest risk (Elford, 1997). The risk of HIV infection for young people in developing countries is increased by socio-cultural, political and economic forces such as poverty, migration, war and civil disturbance (Sweat and Denison 1995). Young people may also face the increased risks of HIV infection by virtue of their social position, unequal life chances, rigid and stereotypical gender roles, and poor access to education and health services.

Major changes over the last few decades have affected the sexual and reproductive health of young people in developing countries. Rapid urbanisation and rural-urban migration has meant that greater numbers of young people are living in precarious and impoverished conditions. Traditional, multi-generational extended families have been increasingly replaced by nuclear families, lone-parent families and, in some cases, the complete absence of parents (Fuglesang, 1997). There are increasing pressures on young people to be sexually active and, in the case of boys, to have had several different partners (Rivers & Aggleton, 1998). Evidence from a variety of countries suggests that the age at which young people become sexually active may be falling (Fee & Yousef, 1993). Certainly young people become sexually active at an early age in many countries. In Uganda, for example, almost 50 per cent of young men and nearly 40 per cent of young women recently surveyed reported having had sex by the age of fifteen years (Konde-Lule et al, 1997). In Dar es Salaam, Tanzania 60 per cent of 14 year-old boys and 35 per cent of girls have reported that they are sexually active (Fuglesang, 1997). In a recent Brazilian school-based study, 36% of females reported having had intercourse by the age of 13 (Weiss, Whelan & Gupta, 1996). In parts of the world such as India where there is sparse evidence about sexual activity among young people and it is widely assumed that sexual initiation takes place within the context of marriage, recent studies show that approximately one in four unmarried adolescent boys report that they are sexually experienced (Jejeebhoy, 1998).

In both developed and developing countries, there are a number of obstacles which make it difficult for young people to protect their sexual and reproductive health.

Young people often have less access to information, services and resources than those who are older (Friedman, 1993; Aggleton and Rivers, 1999). Health services are rarely designed specifically to meet their needs, and health workers only occasionally receive specialist training in issues pertinent to adolescent sexual health (Friedman, 1993; Zeiaya et al, 1997, World Health Organisation, 1998). It is perhaps not surprising therefore that there are particularly low levels of health seeking behaviour among young people. For example, even where they are able to recognise signs and symptoms of STDs, young people recently interviewed in Tanzania indicated that they were hesitant to go to public clinics or hospitals, but were more likely to treat themselves with over-the-counter medicines (Fuglesang, 1997). Similarly, young people in a variety of contexts have reported that access to contraception and condoms is difficult (e.g. Zeiaya et al, 1997). Most importantly, legislation and policies which prevent sex education taking place, or which restrict its contents, prevent many young women and men from maximising their sexual and reproductive health.