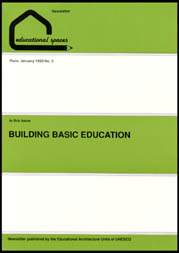 The University of Qatar comprises six faculties, namely, administrative sciences and economics, engineering, humanities, Islamic studies and science. Since the early seventies UNESCO has assisted the university in upgrading its services and facilities. In 1984/1985 the university moved to a new campus. In the present phase of UNESCO's assistance, a laboratory equipment specialist and an architect specialist in interior design of educational facilities were recruited. The drawing shows the proposed layout of the previous men's library building to be converted into staff offices.

Feasibility study on the development of low-cost educational buildings and facilities in six Arab countries, financed by AFESD and AGFUND:

The main objective was to develop techniques for the construction of lowcost educational buildings and facilities in the six least-developed Arab countries by making greater use of local labour and of locally available building material and by adopting appropriate technologies in line with the specific needs and possibilities of the country.

The UNESCO architects in Dakar, with the Mauritanian school building unit, developed two prototypes of primary classrooms. Firstly two classrooms were constructed at Nouakchott to test the possibilities of using gypsum (locally extracted and processed) as building material. Secondly a set of six classrooms was built at Diaguili, a large river front village. The second prototype, inspired by the building system for the Bakel project, was developed to test the possibility of co-financing between a local community and a central source.

Construction of a primary school in El Haj Yousif (Khartoum Suburb) and technical supervision in close association with the National Building and Road Research Institute (NBRR). 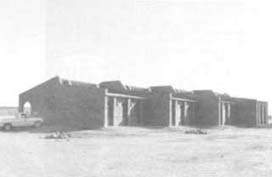 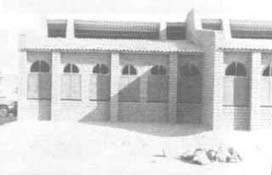