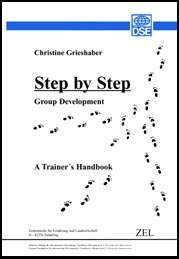 But is laughing, running around, dancing, singing or acting really something anyone is “too old” for? Are these not just ways of breaking out of old structures to find new and livelier ways of communicating and getting in touch with each other?

And don’t we often see children playing “seriously”, when they imitate adult behaviour in their games?

Games, songs and role-play can be seen as very helpful in any kind of group-work. In fact, they are a crucial method in working with groups:

- They help to bring people together in the beginning: communal activities, laughing and singing provide the necessary communication so that strangers can begin in a relaxed atmosphere.

- After sessions, games liven up worn out participants after they have sat and listened to a session.

- Role-play helps a lot by making a special topic visible to the audience and by finding solutions by “playing” with different ideas.

- Exercises are a way of introducing a topic or work on it in a playful way.

To make a good use of games, it is necessary that the animator

- is prepared and able to explain the game to the group

A - Games for Introducing/Games with Names:

A1: THE WANDERING KEY

The players sit in a circle except for the trainer, who has no chair, (s)he stands in the middle holding a bunch of keys (or something similar). (S)he greets one of the seated players: “Hallo, my name is...” and offers him/her a hand.

This player now introduces him/herself by name and follows the trainer, keeping one hand on the trainers shoulder. These two now greet a third person, each saying his/her name, then a fourth and so on.

After a while the trainer drops the keys and all players, sitting or standing, have to change seats. The one that doesn’t manage to get a chair, takes up the keys and starts again.

A2: MY NAME AND MY ACTION

The players sit or stand in a circle, so that they can see each other.

The game is finished, when all have said their names and shown their actions.

A variation is that everybody has to repeat all the actions of the others beforehand, and then can show his/her action.

The players sit in a circle, the trainer stands in the middle; (s)he has got no chair to sit on. (S)he is now asking the players for the names of their right-hand and left-hand neighbours. When (s)he says “tipp” to one player the name of the left neighbour has to be said, at “topp” that of the right neighbour, at “tipp-topp” the whole group has to change seats. If the name is wrong, or if the player takes too much time to remember the name (s)he has to go into the middle to ask. If the one in the middle is fed up with her/his role, (s)he can call “tipp-topp” and everybody has to change chairs. The one without a chair starts again.

This game is only funny, if the players didn’t know each other by name before.

A4: THIS IS A CROCODILE

The players stand or sit in a circle. The trainer walks around in this circle imitating a train with loud “choo-choo”, then (s)he stops in front of another player with a “too-too” and says: “My name is...(e.g. Joanne) and what is your name?”

The person asked stands up and says her/his name.:

“My name is Silas.” Now both are forming the train with Silas in front looking for the next to join them after the same procedure.

The players stand in a circle. They can join in immediately by imitating the trainer’s movements:

When the players have exercised a bit as one group, they can be divided up into four small groups, which sing the canon. This means that they start one after the other and keep their rhythm. The trainer can help the groups to come in. Try to do it faster and faster!

B2: “JACK WAS IN THE KITCHEN WITH TINA”

“Jack was in the kitchen with Tina (3x)” and they were playing on the old banjo, and that was:

and they were playing on the old banjo, and that was:

The players sit in a close circle, their thighs almost touching. When the song starts, everybody has his/her hands on his/her thighs. In the rhythm of the song they now move their hands to the right, one thigh after the other:

(same movements:) and they were playing on the old banjo, and that was:

Fli (move as if you are playing a flute),
Fla (like a recorder)
Fideliao (like playing a banjo/guitar) (3x)
and they were playing on the old banjo, and that was:
now start from the very beginning:
Jack was in the kitchen........

Start very slowly and get faster after a while.

The players are sitting an a circle, the trainer shows the movements to the song:

Start slowly and get faster with time.

The players sit in a circle so that they can see the trainer. (S)he sings each line first and shows the movements that go with the singing, then the group follows.

2. If you’re happy and you know it, slap your sides
(slap sides 2x)

The dancers stand in pairs and hold each other’s right hands, forming two circles, an outer one and an inner one.

Now they start singing as they walk (slow or fast) in one direction:

and Bingo was his name.

Now the pairs stop and face each other:

but now they don’t bow but fall into each others arms,
happy to have found another partner for the next round

Pairs hold each other and start once more.

C - Games in a Circle

This game represents a horse-race on turf. The players sit in a circle, so that they can all face the trainer and watch his/her movements, which express those of running horses.

The first lap is for warming up, the animator shows the movements once slowly.

before the start:
the horses are restless (slapping thighs with the hands)

getting ready for
the start: (become quiet)

single jump: the horses have to jump (stand up and jump once with both feet)

water jump: (make the noise with your fingers moving your lips)

greeting the audience: (wave to them)

greeting the judges: (take off a hat)

wooden bridge: (fists against the breast)

After the warm-up, the race can start. Use the movements in different variations and repeat them as often as wished.

The group sits in a circle, the trainer stands in the middle, (s)he has got no chair. According to the size of the group, the group is divided up into small groups of the same size e.g. (16 people = 4 groups of 4).

Each group is now named after a fruit (e.g. bananas, apples, mangos, lemons). The one in the middle now calls the bananas only for example, bananas and apples... or all fruits (= fruit-salad) at the same time which means, that the ones called have to stand up and change seats. Now the one in the middle has a chance to get a chair as well.

The one without a chair goes into the middle to call again.

Half of the players sit in a circle. Behind each chair stands another player. Only one player has got an empty chair in front of him/her, which (s)he wants to have occupied by one of the sitting players.

Therefore (s)he must blink to one of the seated persons inviting him/her to the empty chair.

But blinking has to be done quite discreetly so that the person standing behind the one who is blinked at doesn’t notice it, because (s)he can hold the sitting person back at the shoulders. If (s)he succeeds in running to the free chair, the one who now has an empty chair in front of her/him tries to find another player by blinking at him/her.

After some time the sitting and standing players change places, those sitting are now supposed to blink and vice versa.

The players stand, holding each other by the hands. Two volunteers are asked to come into the circle, where their eyes are blindfolded, so that they cannot see each other. Both get an instrument to make little noise (keys, rattle...).

Now they are told that they are two cobras, one hunting the other. As they cannot see they have to rely on their ears. If the hunter gives a noise, the hunted one has to respond. This can be done three times. The game is over when the hunter caught the “victim” or was unsuccessful after three times of asking for a noise.

The group meanwhile has to be very quiet to assist the two players, to locate one another better.

The players sit in the circle, except for one who has no chair. This one has to ask three of the others to form an animal together

All players bow into the circle with their arms hanging loose and shout: “guluh - guluh - guluh” (turkey’s cry...)

If one player of the “team” fails (s)he has to go into the circle and the former center takes over her/his position.

D - Games for Trust-building in Groups

The players form pairs. One of them is the robot, the other the robot’s controller. The robot can only move when the controller helps him/her by tapping on his back.

But this only allows the robot to walk straight. If there are obstacles in the way or walls, the robot has to be moved to the side - by tapping on the right shoulder to go right, on the left shoulder for left -.

To stop the robot, touch it gently on the head.

Now try to move your robots through the room without touching the others.

After some time robots and controllers change roles.

1. Try to move the robot to a special place in the room and back to the start.
2. One controller has to move two robots.
3. The robot is blind (closes the eyes) and therefore has to be moved very carefully.

Small groups of up to eight form a close circle. One of the players (only if (s)he wants to!) goes into the center, and stiffens her/his pelvis, with the rest of the body loose, hands at sides.

The others hold their hands in front of their bodies. When all are ready, the one in the center lets him/herself fall in one direction (eyes open or closed as preferred). The standing people catch him/her and try to move him/her gently along the circle and across, when they get more experienced.

When the center one has had enough, they stop, discuss briefly how (s)he liked it and then the next one can try.

An even number of players form a circle, holding each other by the hands. Now they count “1-2-1-...” to divide the group into two sub-groups.

The players stand in a close circle, stretching their arms to the center. On a certain command they close their eyes and try to find two other hands they can hold. When each hand is linked to another one, the players open their eyes.

Now try to unravel this human knot! It is not allowed to let hands go, the players have to move up and down, just as needed.

The game is finished, when the players are standing in a circle, holding their neighbours by the hand.