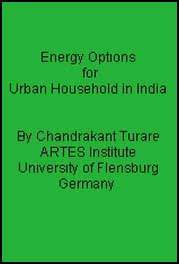 There are, of course, various sources of household energy ranging from firewood to electricity. Fuel sources to be used in household are broadly classified as traditional fuels and modern fuels. Traditional fuels include firewood, charcoal, dungcake, and agricultural residues, while modern fuels include electricity, coal, kerosene, LPG and today even solar energy. Cooking, water heating and lighting are basic issues of great concerns to every household. In a country as vast and varied as India, no single fuel can meet the growing needs of household energy in urban areas. There are also large regional difference in the mix of fuels used in the household.

Urban consumers has a wide range of fuel choices for household use ( Fig.1)

Hundreds of energy survey across the world has revealed that following factors determine the type and amount of fuels in domestic sector.

From the above factors, household income is seen to be powerful determinants in choosing desired kind of fuel. With rising income, urban families are able to switch from traditional fuels to more efficient, convenient and cleaner modern fuels and equipment for cooking and heating. However, getting the right fuel is not a easy task. Brief information about fuel characteristics, market demand and availability is given below.

Wood has been mankind´s first energy source, preceding even the use of wind and water power. Across the world, majority of families which use biofuels prefer wood. Firewood, which accounts for 60 percent of country´s household requirement (Gusain, 1990), continue to be primary source of energy for cooking in India. The twigs and brushwood are more important source of woodfuel than cut logs which involve falling of tree.

Efficiency of woodstove is matter of great concern in a view to avoid wasteful use of firewood. Traditional cookstoves operate at the efficiency of less than 10 percent . By introducing woodstoves which have efficiency between 20 and 30 percent, a very significant saving of energy and firewood can be achieved, leading to considerable benefit to the environment.

A decade ago, firewood contributed to 27 percent of total energy for cooking and heating in urban household. Increase in demand and reduction of forest cover has led to increasing shortage and rise of urban firewood prices (Bewonder et al.1983). Firewood consumption trend shows decline in it´s usage in urban areas, not because of shortage of firewood, but heavy use of modern fuels. Those poor and middle income households , who cannot afford modern fuels, rely on firewood as principal fuel for cooking and water heating. However, higher income household today hardly use firewood for cooking and heating.

Charcoal is a product of wood carbonisation (absence of air). By burning around 4 tonn of firewood, 1 tonn of charcoal is produced. Charcoal offers twice as much as heat produced by wood. Energy lost during the conversion of wood to charcoal can be compensated by using efficient charcoal cookstove. Unlike firewood, it burns slowly and does not produce any smoke . In countries like India, with surplus labour and lots of wood waste, charcoal offers a lucrative source of additional fuel (Paul, 1985). However, charcoal is not a major domestic fuel. Charcoal contributes about 3 percent of total energy consumption in urban India (Leach, 1987). It is quite popular among cottage industries. Briquettes made from charcoal has commercial value and it is sold in the market. Where ever available, middle income households are using charcoal briquetts for cooking and water heating.

If wood is scarce and costly, more abundant or accessible but otherwise less favoured fuels is used instead. Agricultural residues are basically biomass materials that are by product of agriculture. It includes crop stalks, wheat and rice straw, coconut shells, maize and jowar cobs, jute sticks, rice husks etc. Woody crop residues such as coconut shells, jute stick make the best cooking fuel as they burn well, while other crop residues such as wheat and rice straw burns quickly, making cooking a more time consuming and tedious activity.

Cow and buffalo dung are rated best type of dung in India. When made into cakes and dried, as is the practice in India, they light easily and burn for longer time. Attitudes towards dung as fuel vary. Urban people who are unfamiliar with dung, regard it as dirty and smelly. Another problem with dungcake is the smoke, especially when fire is lit. Despite the problems with dung, neither does dung burning is restricted to poor families nor occur solely in rural areas . Considerable amount of dung are also produced and used in town, where there is large livestock population (Bernard, 1985).

Those households who had rural background and began living in urban areas were using 5 million tonn of dung annually, accounting for 4 percent of total energy consumption in urban household (NCAER, 1985). It is estimated that by 2000, India will consume 105 million tonn of dungcake per annum (Planning commission, 1985). In northern Indian household, it is common to find cowdung cakes being used for heating milk. Many people feel that chapatis or rotis and some special dishes taste better when cooked on dung fire. Even town people who use kerosene and LPG gas for rest of the cooking, prefer to make rotis on dung fire (Gopalkrishnan, 1984).

Coal (commonly called Koyla in Hindi) is a conventional fuel widely used in industry. In some areas, where there are coal mines, particularly northern belt states of West Bengal and Bihar, and Eastern part of Maharashtra, households are seen using coal as fuel for cooking and water heating. Away from coal mines regions, people are not using coal for household activities. Out of total coal consumption in India, 7.3 percent of coal is used in household sector.Two decades ago, 4.3 million tonn of coke was used annually in urban household, accounting for 17.7 % of total urban household energy. With availability of other fuels such as kerosene and LPG, consumption of coal and coke for cooking and heating is declining.

Kerosene is the major alternative to biofuels at many places. It is used by all income groups -from poor to rich households. As kerosene is basically recognised as a fuel for poor people, India government is subsidising kerosene fuel prices and also maintain good control over price issue. Since the use of kerosene is convenient, many households in urban areas prefer to use kerosene. The urban consumers mainly use kerosene for cooking and heating. An energy survey reported that at all India level, kerosene accounted for 12 percent of total energy and 46.6 percent of commercial energy consumption in household sector. Kerosene share in urban household was 21.2 percent of total energy (NCAER, 1985). The consumption of kerosene in urban household is increasing . By 2000 A.D, it is estimated that Indian household will require 17.73 million tonn of kerersone, with high proportion of consumption in urban household.

Poor family sometimes avoids use of kerosene for cooking , although it costs just 40-50 percent as much as firewood on useful energy basis, not because kerosene stoves are costly, but it is difficult to get right amount of kerosene (Leach, 1987). Shortage of kerosene, a long queues at ration shop and other supply difficulties are major deterrents to it´s use for cooking.

LPG on account of it´s cleanliness, convenience in use and easy transportabilty have made it much preferred fuel among the urban households. LPG has become today a major fuel to many middle to uppe income households in urban areas. LPG stove has good controllability. Hence, it can save much energy compared to wood stove .As far as CO2 and CH4 emissions of wood stove are concerned, LPG stoves create less pollution (Smith,1994).

As per the goverment policy, LPG cylinder is subsidised and available at reduced price. Since there is a great demand for LPG, it is not easily available. After registering name for regular use of LPG, consumers have to wait for at least two years to get first LPG cylinder in house . Some households keep two cylinders in house, so that in shortage second cylinder can be used. Some private firms are also authorised to market LPG cylinders. Privately marketed LPG cylinders are easily available. However, compared to government rate, they are quite costly.

Normally used LPG cylinder weighs 15 kg and lasts usually for one month when it is used for cooking only. Some of the households in urban areas prefers to use kerosene for water heating and LPG for cooking only. A small (´camping gas´) LPG cooker is a cheaper alternative, but is better suited for cooking snacks and making hot drinks than preparing family meals.

As expected, electricity is predominantly an urban energy source and its consumption shows a rapid increase with income.

Most of the households in the urban areas today rely on electrical energy to meet their many energy demands. Since independence, India´s electrical consumption has increased 20 fold. Of the total produced electricity in India, 24 percent is used in household sector.

According to 1994´s figure, India´s installed electric capacity is 87,000 MW and this is not enough to meet total electrical energy demands in the country. Power outage and rationing is frequently necessary during period of demands.

The advantages of non-conventional fuels (solar,wind, bioenergy) are that they are clean, non-polluting and do not damage the environment. As the prices of conventional fuels are soaring high, non-conventional energy particularly solar energy is getting a wide spread importance in urban household. Two years back, the people were hesitating to purchase solar water heater because of high initial cost and availability of electricity at cheaper rate. However, today situation has been changed dramatically. The price of electricity is increased and price of solar water is reduced. High income households are now turning to solar water heater and proudly saving over electric water heating system. Many solar water heaters are seen today on the roof of houses in high income residential areas in many indian cities. Middle income households are not able to afford the solar powered devices due to huge cost involved in procuring the system.

Household income and price of fuel greatly influence the demand for particular type of fuel. Growing prices of modern fuels is the major concern to majority of urban consumers. Urban poors are the first to feel the fuel shortage and rising cost. They suffer most from them. Many poor families in urban areas still rely on traditional fuel, putting household sector at the center of multiple problem of poverty, land use and biomass productivity. Some of the poors are even forced to use very low quality fuel such as weeds and grasses. The members of poor families spend the great efforts, time and labour in collecting low grade fuel.

In order to help urban households, particularly poor families, special efforts are needed in improving supply and marketing of kerosene and biofuel alternatives- including the provision of low cost and efficient kerosene stoves and small LPG systems perhaps based on 4-6 kg cylinder .