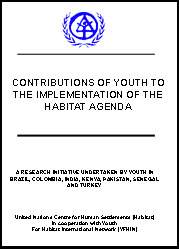 In the evaluation of these reports, the common problems encountered are identified as:

· Lack of full acknowledgment of the potential of youth;

· Lack of awareness of the youth organizations working in the fields of the Habitat Agenda and Agenda 21;

· Lack of inter-disciplinary and inter-institutional approaches;

· Hindering effects of politics and bureaucracy;

· Lack of networking among youth organizations and other institutions;

These common topics mostly concern general problems that young people are confronted with in diverse areas related to human settlements development. These problems are better understood when the reports are examined separately, analyzing the causes of these problems, processes of how they emerged and grew, and their assimilation in-the culture as well as the reactions of the community.