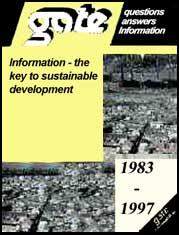 Government Statement on Cooperation with the Third World

In his government statement on 18 March 1987 to the plenary session of the Bundestag, Chancellor Helmut Kohl outlined his government's position on cooperation between the Federal Republic of Germany and Third World countries.

The Chancellor's statement included the following remarks: "Our relations with the new political centres in the Third World must go beyond trade and development aid. We desire a comprehensive and continuous political dialogue with these countries, between equal partners, as a major element of our cooperation...

We support the desire of these countries for independence, their wish for self-determination and to shape their economic and social development independently in accordance with their own cultural traditions. True non-alignment and regional cooperation are important elements of international relations.

The world of tomorrow will only be able to live in peace, freedom and stability if hunger and suffering can be reduced, if the prosperity gap between North and South can be narrowed and if - wherever possible human rights can be guaranteed.

We will continue to give asylum to those who are persecuted for political, racial and religious reasons. However, we cannot solve the world's economic problems by immigration to the Federal Republic of Germany. For the people in the world who are starving and suffering economic distress, the best help is and will continue to be on-the spot help.

Following the re-orientation of recent years, we are now concentrating our aid in the following areas:

· helping in particular the poorest countries;

· assuring self-sufficiency of these countries in food production;

· attaching greater importance to the role of women in the development process;

· education and training, not tied to inappropriate Western models;

· environmental protection in the Third World, and

We want to use returns on capital investments to finance new measures step by step.

However, without economic progress and increasing productivity it will not be possible to overcome poverty and economic backwardness in the Third World. Therefore we place our trust here, too, above all in private initiative and the capabilities of free and open markets.

Our government development policy must provide assistance in particular to regions whose structure and performance are weak. Only in this way can more autonomous productivity and more entrepreneurial activity develop in craft trades, in small-scale industry, and in small and mediumsized rural enterprises.

Development aid is not only a task for the state, but for the whole of society. I thank all who have demonstrated their willingness to make donations and commit themselves personally to the fight against hunger and poverty in the Third World.

In particular I thank the churches, which have helped to make people in our country very aware of the suffering in the Third World. We will continue our cooperation with non-governmental organizations and intensify it wherever possible.

The Federal Government attaches great importance to further development of our friendly relations with the countries of Asia, Latin America, Africa, the Near and Middle East and the South Pacific region. Some of these countries are highly developed, industrialized nations. The majority of them are developing countries who expect us to show special solidarity and willingness to cooperate with them in building up their economies."

The "Wissenschaftlicher Beirat" (Scientific Advisory Board) of the Federal Ministry of Economic Cooperation (BMZ) has critically appraised the meaningfulness of the so-called 0.7 per cent aim, i.e., the portion of the GNP of industrialized nations which is repeatedly declared to be the necessary or desirable amount given as official development assistance (ODA).

The Board concludes that this value is only of limited meaningfulness in international comparisons of development aid. For one thing, it is easier for countries with high government quotas to attain this goal than for countries which prefer to keep the government quota low. For market economies. Moreover, this criterion measures only the funds another, the ODA criterion does not take into account the aid provided by non-governmental organizations, although these make a considerable contribution to development cooperation in countries with made available, but not their effectiveness in advancing development. Even as a measure of the willingness of a donor country to make sacrifices it says little, because it is purely a cash flow value and gives no information about the extent to which financing conditions are affected by subsidies.

· differences in the forms in which aid is given (delivery commitments, conditions imposed);

· differences in other forms of development cooperation (trading policy etc.).