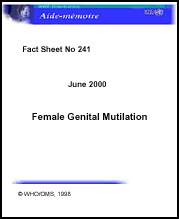 What is Female Genital Mutilation?

· Type I - excision of the prepuce, with or without excision of part or all of the clitoris;

· Type III - excision of part or all of the external genitalia and stitching/narrowing of the vaginal opening (infibulation);

· scraping of tissue surrounding the vaginal orifice (angurya cuts) or cutting of the vagina (gishiri cuts);

· introduction of corrosive substances or herbs into the vagina to cause bleeding or for the purpose of tightening or narrowing it; and any other procedure that falls under the definition given above.

The most common type of female genital mutilation is excision of the clitoris and the labia minora, accounting for up to 80% of all cases; the most extreme form is infibulation, which constitutes about 15% of all procedures.

The immediate and long-term health consequences of female genital mutilation vary according to the type and severity of the procedure performed.

Immediate complications include severe pain, shock, haemorrhage, urine retention, ulceration of the genital region and injury to adjacent tissue. Haemorrhage and infection can cause death.

More recently, concern has arisen about possible transmission of the human immunodeficiency virus (HIV) due to the use of one instrument in multiple operations, but this has not been the subject of detailed research.

Psychosexual and psychological health: Genital mutilation may leave a lasting mark on the life and mind of the woman who has undergone it. In the longer term, women may suffer feelings of incompleteness, anxiety and depression.

Who Performs FGM, at What Age and for What Reasons?

In cultures where it is an accepted norm, female genital mutilation is practiced by followers of all religious beliefs as well as animists and non believers. FGM is usually performed by a traditional practitioner with crude instruments and without anaesthetic. Among the more affluent in society it may be performed in a health care facility by qualified health personnel. WHO is opposed to medicalization of all the types of female genital mutilation.

The age at which female genital mutilation is performed varies from area to area. It is performed on infants a few days old, female children and adolescents and, occasionally, on mature women.

The reasons given by families for having FGM performed include:

· psychosexual reasons: reduction or elimination of the sensitive tissue of the outer genitalia, particularly the clitoris, in order to attenuate sexual desire in the female, maintain chastity and virginity before marriage and fidelity during marriage, and increase male sexual pleasure;

· sociological reasons: identification with the cultural heritage, initiation of girls into womanhood, social integration and the maintenance of social cohesion;

· hygiene and aesthetic reasons: the external female genitalia are considered dirty and unsightly and are to be removed to promote hygiene and provide aesthetic appeal;

· myths: enhancement of fertility and promotion of child survival;

· religious reasons: Some Muslim communities, however, practise FGM in the belief that it is demanded by the Islamic faith. The practice, however, predates Islam.

Prevalence and Distribution of FGM

Most of the girls and women who have undergone genital mutilation live in 28 African countries, although some live in Asia and the Middle East. They are also increasingly found in Europe, Australia, Canada and the USA, primarily among immigrants from these countries.

Today, the number of girls and women who have been undergone female genital mutilation is estimated at between 100 and 140 million. It is estimated that each year, a further 2 million girls are at risk of undergoing FGM.

Current WHO activities related to FGM:

A joint WHO/UNICEF/UNFPA policy statement on FGM and a Regional Plan to Accelerate the Elimination of FGM were published to promote policy development and action at the global, regional, and national level. Several countries where FGM is a traditional practice are now developing national plans of action based on the FGM prevention strategy proposed by WHO. Research and Development A major objective of WHO’s work on FGM is to generate knowledge, test interventions to promote the elimination of FGM. Research protocols on FGM have been developed with a network of collaborating research institutions as well as biomedical and social science researchers with linkages to appropriate communities. WHO has reviewed programming approaches for the prevention of FGM in countries and has organized training for community workers to strengthen their effectiveness in promoting prevention of FGM at the grassroots level.

· Development of training materials and training for health care providers

WHO has developed training materials for integrating the prevention of FGM into nursing, midwifery and medical curricula as well as for in-service training of health workers. Evidence based training workshops, to raise the awareness of health workers and to solicit their active involvement as advocates against FGM, have also been developed for nurses and midwives in the African and Eastern Mediterranean region.