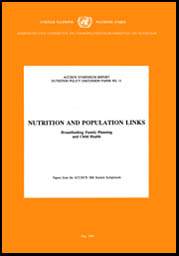 Both scientific evidence and programme experience demonstrate the mutually reinforcing effects of nutrition, breastfeeding, child survival, maternal health and fertility. Maternal and child health services, nutrition and family planning programmes are ideal partners in promoting and protecting the health and well-being of the whole family. Better health and improved social status of women assist the survival, growth and development of children. Improved child survival and better health of women, in turn, strengthen the demand for family planning.

Adequate nutrition, preferably by breastfeeding, is critical for growth, development and immunization in the early months of life by providing essential nutrients and early immunities and by lowering the risk of anaemia, diarrhoeal disease and acute respiratory infections.

It is equally important to emphasize that balanced diet and birth spacing are crucial for women’s health. Women’s nutritional status affects not only pregnancy outcome and birth weight, but also fertility, lactation, productivity and morbidity. A mother who is well fed and practices modern family planning is unlikely to suffer from the “maternal depletion syndrome”. Because she is healthy and she has few children to take care of, her body has enough time to fully recover after each pregnancy. Good nutrition and family planning and better socio-economic conditions protect women and their daughters from the cycle of low birth weight and small adult stature in which they run higher risks at all stages of their reproductive life.

UNFPA believes that breastfeeding is an essential component of programmes of maternal and child health and family planning. Adequate nutrition of infants starts with the health and nutritional status of their mothers. It is most disconcerting therefore to find that the caloric intake of 45% of lactating women is below the required level and that 50% of pregnant women are anaemic.

If they are to choose breastfeeding freely, women need adequate food and health care; they need a reasonable workload and working conditions; and they need social support. They also need the means and information to enable them to space their pregnancies, so that they can continue to breastfeed and have sufficient time to recover from pregnancy and delivery.

They need at least two years of efficient protection against pregnancy. Full and exclusive breastfeeding can help delay the return of fertility for about four to six months. After that, modern contraception is required. It is therefore extremely important that the mother is introduced to family planning at about the fourth month after delivery. This should be considered a normal part of a continuous process which also includes monitoring nutritional status and food intake during pregnancy and lactation; their impact on recovery of fertility; and the nutritional effect of exclusive breastfeeding on the mother and the baby.

The world’s population, now approaching 5.4 billion, will reach 6.4 billion by the year 2001. By and large, the biggest increases will come in the poorest countries, those by definition least equipped to meet the needs of the new arrivals and invest in their future. Rapid population growth in poor and rural areas of Africa, Asia and Latin America is damaging the natural environmental and reducing its productive capability.

In short, because food production has not kept pace with growing numbers and growing needs, nearly one billion people do not get enough to eat to lead fully productive lives, over 400 million are chronically malnourished, and every year 11 million children under the age of five die from hunger or hunger-related diseases.

Women are central to the whole process of development. Women are not only life givers and care providers; they are food producers, income generators and agents of change. With this in mind, it is important to consider gender inequalities that women, and particular girls, experience not only in health care and education, but also in nutrition and food intake.

Sex bias in health and nutrition has been documented in several recent analyses in Asia, Africa and the Middle East. Between 20% and 45% of women of child-bearing age in the developing world do not eat the WHO-recommended amount of 2,250 calories a day under normal circumstances, let alone the extra 285 a day they need when they are pregnant. In Thailand, for example, the average woman gets only 1,900 calories a day; in the Philippines the average is 1,745 - despite their constant heavy workload, and the back-breaking additional work at peak times of the farmer’s year.

Research in Gambia found that women there lost an average of 1.4 kilograms in the last three months of pregnancy. Anaemia associated with poor nutrition affects as many as two-thirds of Asian women, half of all women in Africa, one sixth of Latin American women, and 60% of women worldwide. Heavy manual work combined with poor nutrition in mothers results in low-birth-weight babies and an inferior supply of breast milk.

In most developing countries today, the girl child gets less food, she is breastfed for a shorter period of time than the boy and she is weaned earlier. Girls are less likely than boys to receive medical attention. Childbirth in adolescence puts their lives at risk and adversely affects their health, nutritional status, education and employment opportunities. Girls and women generally enjoy fewer rights and opportunities than boys and men in the same socio-economic group, and encounter more cultural, social and legal obstacles.

I would like to urge this Session to reflect specially on women’s unequal social and economic status and how it interacts with their low nutritional status and that of their children.

The food crisis has three main components. First, lifestyles, incomes and social organization determine levels of consumption. Second, the technologies in use determine the extent to which human activities damage or sustain the environment, and the amount of waste associated with any level of consumption. These two factors determine the impact per person.

The third factor, population, is the multiplier that fixes the total impact. Inequality enters as a fourth factor, for example, when most land is in large holdings and the poor are forced into artificially small or marginal areas. Poverty is involved when it prevents the adoption of more costly new technologies that could halt or slow down environmental degradation. Population is always part of the equation. For any given type of technology, for any given level of consumption or waste, for any given level of poverty of inequality, the more people there are, the greater is the impact on the environment and, in turn, on food production capacity.

We have the knowledge, technology, resources and good will to solve the food crisis. What we need now is to give these issues the priority and resources they deserve. With an integrated strategy and common efforts, we can improve the health and well-being of women and children, and safeguard the future for generations still to come.