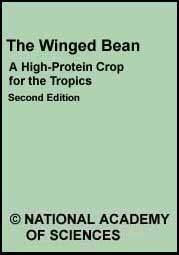 In 1975 the National Academy of Sciences published a report on the winged bean, Psophocarpus tetragonolobus. At that time the plant was a little-known tropical legume grown almost exclusively in Papua New Guinea and Southeast Asia. The seemingly exceptional merits of the winged bean suggested that an in-depth examination of its characteristics and prospects be undertaken promptly and the results brought to the attention of the international development community.

The existing literature on the plant at that time was meager, much of it scattered through 60-year-old journals, mimeographed papers, and annual reports from experiment stations. To evaluate the available information and assess the potential of this plant, an international panel was convened at Airlie, Virginia, in October 1974. The panel was composed of specialists with experience in winged bean cultivation, in tropical agriculture, and in nutrition.

Although the panel was not expected to produce a comprehensive report on the winged bean, it was asked to consider such matters as

· The state of knowledge concerning the plant;
· The bean's promise as a crop plant;
· Significant data gaps and research needs; and
· A strategy for international research and testing to assess the crop's future.

Since 1975 when the report was published, the winged bean has sparked the interest of many scientists, agronomists, and others. The plant has now been introduced to more than 70 countries. The new information this has yielded warranted this updated edition of the report.

Virtually all of the agronomic and nutritional research needs listed in the first edition have received at least some attention. Furthermore, the taxonomic survey of the genus Psophocarpus recommended in the report has been undertaken by one of the world's foremost legume taxonomists, Dr. Bernard Verdcourt of the Royal Botanic Gardens at Kew, near London. In addition, the newsletter recommended by the earlier National Academy of Sciences panel is now an established publication, The Winged Bean Flyer. It is currently sent to about 1,000 researchers in more than 60 countries. A winged bean grower's handbook for Papua New Guinea farmers and comprehensive winged bean planting guides for Philippine and Thai farmers have also been produced. A 68-page collection of almost 300 abstracts of winged bean literature from 1900 to 1977 was published in 1978 by the International Grain Legume Information Centre in Ibadan, Nigeria.

A national program on the winged bean has been developed in the Philippines and the crop is now an officially designated target crop of the Philippine Department of Agriculture. The governments of Indonesia and Sri Lanka have also officially designated the winged bean as a priority research crop. The Southeast Asian Programme of the International Board for Plant Genetic Resources has been actively engaged in the collection, evaluation, documentation, and utilization of winged bean germ plasm. In Ghana the bean has been adopted as a crop for its green pods, which fetch a handsome price in Ghanaian markets. Winged bean pods now also appear in the markets of Western Samoa and Hawaii.

The First International Symposium on Developing the Potential of the Winged Bean was held at Los Banos, Philippines, in January 1978. It was attended by almost 200 researchers from 26 countries on 6 continents. Eighty seven scientists and researchers collaborated on more than 50 papers written specifically for the conference and comprising well over 900 pages of manuscript. The Second International Winged Bean Seminar was held in Peradeniya, Sri Lanka, in January 1981. This time more than 200 people from 36 countries attended and more than 100 scientific papers were presented.

Few crops have risen so quickly from total obscurity to the winged bean's current level of prominence. The interest in this formerly little-known plant has generated so much information in the last 5 years that a computerized Winged Bean Information and Documentation Service Center is operated by the Agricultural Information Bank for Asia in the Philippines. The assumptions in the earlier report are so far largely standing up to scrutiny. The plant holds such promise that its former obscurity is baffling. As a result of all the new information, prospects seem favorable for the greatly expanded commercialization of the winged bean.

This second edition includes many new findings. It remains, however, an introduction to the plant and not a detailed review of all winged bean knowledge. Its main purpose is to acquaint administrators and uninitiated researchers with the plant and its promise.

Initially compiled by Louis Lazaroff of the International Council for Development of Underutilized Plants, the report is based on contributions received from 32 winged bean researchers in different parts of the world.

The final manuscript was edited and prepared for publication by Noel Vietmeyer and F. R. Ruskin, assisted by Mary Jane Engquist, all of the National Research Council staff.

In the Ivory Coast, ludonesia, and elsewhere, virus diseases and nematodes that severely limit winged bean yields have been discovered (see Appendix A). The viruses are seed-borne, and until uncertainties over the potential spread of these diseases are resolved, precautions should be taken with seed introductions, and the widespread exchange of uncertified seed should be curtailed.