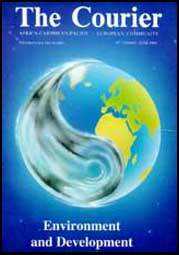 Cd'lvoire and the Community have been cooperating for many years, ever since the pioneering era of independence and the establishment of the European Development Fund.

Great mutual understanding over three decades of combined effort has made these privileged relations what they are today.

Cd'Ivoire has been closely involved in the gradual extension of Community cooperation and its range of instruments under the Yaounde and then the Lomonventions, both as an active negotiator in the AASM and the ACP Group and as a partner in the application of successive policies, and it is clearly aware of the full potential of these varied and complementary instruments, although it is also realistic about the fact that this exemplary cooperation has its limits. The constructive, permanent dialogue which has been firmly established reflects peaceful acceptance of the level of interdependence reached, great mutual frankness... and the occasional impatience.

The fact that agricultural exports are decisive to the Ivorian economy and exports are the driving force of the development model adopted in the first 10 to 20 years of independence (and even before) could have made the importance of financial and technical cooperation merely relative, because everything hinged on the terms of access of the output to the Community market, the workings of international commodity agreements and the use of financial machinery to stabilise export earnings. In fact-notwithstanding the substantial benefit which Cd'lvoire has had from the trade arrangements, product agreements and Stabex-financial and technical cooperation has never been neglected.

Community development aid has had a solid impact, largely because the successive focal sectors have been chosen in the light of the needs of the moment. Initially, the (first) European Development Fund concentrated on social infrastructure (50%) and economic infrastructure (38%), with the building of schools, health facilities, water supplies, roads, railways and so on.

With Yaounde II and the 2nd EDF, priority went on rural modernisation (72%), diversifying cash crops being the main idea behind the oil palm plan. This move towards rural production gained ground with Yaounde II (3rd EDF), when 66% went into rice development and other agricultural schemes. Lom (4th EDF) saw economic infrastructure projects disappear completely from EC-Cd'lvoire cooperation, to the benefit of rural development (44 %) and social development (40.5%), with diversification catered for by rubber plantations and food security by rice and livestock.

The priority on rural development was clearer still under LomI (5th EDF), when 57% went on agricultural projects, with 22% for social infrastructure and 9% for microprojects. Diversification was still there with oil palms and fruit growing, while food security was catered for by further extensions to the rice crops, plus marketing support for the cooperative movement. LomII (6th EDF) would have developed along the same lines had it not been for the serious economic and financial crisis which struck the country in the 1980s, forcing it to run an adjustment plan and ask for Community aid to be reoriented to provide direct support for the stabilisation policy.

Cd'Ivoire handled this unprecedented crisis, which had a great deal to with the drop in its export prices, with corrective measures on a large scale. The 6th EDF national indicative programme (ECU 82 million) had rural development in the broadest meaning of the term as its focal sector, with special priority on self sufficiency in food, settling young people in rural areas and developing the savannah region. It was 46% committed when the National Authorising Officer asked the Commission to reorient the aid to provide a sectoral import programme as backing for the stabilisation and economic recovery policy.

So 50% of the 6th EDF indicative programme-ECU 41 million-was switched and used to finance oil imports, which yielded counterpart funds to cover budget spending targeted on farming and public health. In agriculture, Cd'Ivoire's contributions could be paid to projects cofinanced with the Member States and the World Bank.

In public health, all health posts, centres etc were resupplied with basic medicines under a health policy reform which put priority on primary health care, rationalised hospital management and a reduction in the cost of medicines.

The other half of the 6th EDF programme was spent on the original priorities, which were, mainly, village oil palm plantations (ECU 20.85 million), the cattle and sheep development support programme (ECU 11 million) and the three micro-project programmes (ECU 3.76 million). Commitments from the 6th EDF programme totalled more than ECU 80 million in March 1992.

The national indicative programme for the period of the first financial protocol of LomV (7th EDF) was signed on 11 July 1991. The Government produced a summary of the stabilisation programme designed in 1989 (this was positive overall, with a large cut in the primary budget deficit and reforms running in various sectors) and set up a medium-term economic programme in that year too. The 7th EDF indicative programme reflects a desire to overcome the structural and cyclical problems of the economy. The focal sectors are:

a) rural development (50% of programme resources), with schemes to step up productivity, augment and diversify production and improve the marketing of food and cash crops, the protection of the environment, improvements to sectoral policy programming and support for the cooperative movement and the professional organisations;
b) the urban sector (30%), with decentralised management schemes to improve urban centres of economic and social development. These will be mainly on the coast, as a complement to other funders' operations, as part of the development programme devised in conjunction with the municipal councils. They will provide support for the drive to improve the management potential and boost the resources of the local authorities, improve the urban standard of living and environment and develop economic activity;
c) human resources (10%), with particular reference to health. Community aid will offer support for the human resource development programme, the programme to improve national planning and programming potential (Ministry of Health and Welfare), the basic medicines and cost recovery programme and the setting up of permanent training and information facilities for nurses;
d) a 10% reserve not specifically allocated can be used to finance schemes to back up the regional programmes and provide support for priority schemes following implementation of the indicative programme.

ECU 105.5 million is available for this 7th EDF programme. ECU 90 million of it is in the form of grants and a first allocation of ECU 15.5 million as specific resources from the structural adjustment support facility-to which will no doubt be added a significant amount in non programme aid, in particular for Stabex. Lomon-programme resources are large-far in excess of the amounts of the indicative programmes (see table)-and the biggest single instrument is, of course, Stabex, accounting for transfers of more than ECU 0.5 billion to date.

With LomV, Stabex now helps in two ways - by supporting various sectors which have suffered losses in export earnings and, macroeconomically, by neatly fitting into the series of resources which can be mobilised to support structural adjustment. In Cd'lvoire's case, there is a mutual framework for obligations (signed on 21 December 1991) fixing the uses involved in this new approach. The Stabex 1990 transfer was intended to help run the country's structural adjustment policy (supported by Bretton Woods and the main funders), back up its reorganisation of the coffee and cocoa sector and support diversification, in particular into cotton and rubber.

This short account of trends in EC-Cd'lvoire cooperation, from its origins down to the present day, clearly reveals a constant concern with helping the drive to develop the country and revive its economy in the right way at the right time. The current priorities

Nevertheless, these instruments can only help the country correct the endogenous causes of its serious economic and financial crisis. They cannot replace the national effort.

Cd'lvoire is also working on an international plan to get better terms for debt and commodity prices, the two big external causes of crisis. It has a great deal of faith in what the Community can do to help here, particularly when it comes to getting the International Cocoa and Coffee Agreements going again.