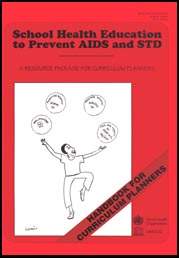 Please note that those marked with (*) are particularly recommended for inclusion in short tests.

Acceptable answers are in italics

1. Name three body fluids that are known to spread the AIDS virus, HIV.

2. Name two ways in which blood-to-blood transmission of the AIDS virus, HIV, can occur.

3. What are three ways HIV is spread?

4. Give two reasons why AIDS is so serious.

5. List five ways by which HIV is not spread.

6. List four ways that you can protect yourself from HIV and other infections.

7. Describe what happens from the time a person is infected with HIV to the time he/she dies from AIDS.

8. What is meant by the “window period?” Why is this period so important?

- “Window period” is the period of time from when a person is infected until antibodies (germ fighters) develop in the blood. This is usually 2 to 12 weeks. It is important because if one is tested during this period, the test will be negative since the test looks for antibodies against HIV, which have not formed yet. However, the person can infect others.

10. Give three reasons why a person might want to get tested.

11. What two pieces of advice could you give to a person who injects drugs?

12. List three sources of help that a person could use if they were worried about HIV/AIDS.

13. Give four reasons for saying “no” to sex or for delaying sex.

14. List three things that could help a person to delay sex.

- Go out with a group of friends
- Decide early how far you want to go
- Decide on your alcohol/drug limits
- Don’t fall for romantic words and arguments
- Be very clear about your limits
- When feeling uncomfortable - leave
- Get involved in activities (sports, clubs)
- Don’t go around with people who pressure you to have sex
- Be honest from the beginning about your sexual limits
- Don’t go out with people you cannot trust
- Avoid lonely spots where you couldn’t get help
- Don’t accept rides from those you can’t trust
- Don’t accept money and presents from people you don’t know very well
- Avoid going to someone’s room when there is no one else at home
- Express affection without having sexual intercourse

15. Give three ways a person could be affectionate to a partner without having sexual intercourse.

16. How does “the mountain climbing” idea help you to make decisions about your sexual limits?

- The farther you go the more difficult it is to stop.

- It is difficult to go back to a safer point.

- Decisions about sexual limits should be made at a point where you know it will not lead to sexual intercourse.

17. Describe the characteristics of passive, assertive and aggressive persons.

18. What are the advantages of being assertive?

19. List three things a person could do to prevent sexual threats and violence.

20. Give three reasons why a sexually active person would not use a condom to protect against HIV and/or pregnancy.

21. What three things would you look for in a good condom?

22. What is the most important step in using a condom to prevent it from being left in the female vagina?

23. Name two things that could be done to reduce the chance of a condom breaking.

- use water-based lubricant
- pinch air from tip of condom
- never reuse a condom
- put condom on properly
- be careful in taking condom off
- don’t use past expiry date
- smooth condom out after it is on
- be careful when opening the package
- store condoms in cool, dark spot

24. What could a person do if a condom did break?

25. Give an example of discrimination

26. Give two reasons why it is important to be compassionate to a person with HIV or AIDS.

- they are often young
- they are no threat
- they suffer more if isolated
- it is important to think of someone other than yourself
- they will likely die
- it is a painful, long-term disease
- they are often abandoned by family and friends

27. What are four ways to be compassionate to a person with HIV or AIDS?

- Write a letter (note)
- Share a meal
- Clean the house
- Give them a hug
- Just listen
- Make a “fun” present
- Help other family members
- Find others to give support
- Celebrate special days
- Get medicines
- Share emotions - laugh, cry
- Do not let them blame themselves
- Be friendly
- Play games
- Hold their hand
- Talk about the future

28. What could a person do to give support to a person who has AIDS and:

a) has loss of appetite?

- Ask what they would like to eat, when and how much
- Eat with the person when possible

c) has body sores from being in bed?

29. Give three ways you can protect yourself if you are looking after a person with AIDS.

- Use bleach and soap and use gloves to clean soiled clothes or bedding
- Wash hands with warm, soapy water after contact with infected person
- Put used needles and syringes in hard plastic or metal box
- Wash thermometers with soap and water
- Keep cuts, sores or rashes covered at all times
- Clean bathroom with bleach
- Clean dishes with hot, soapy water

NOTE: You should wear a mask if you are ill so as not to infect the person with AIDS.

30. Provide three ways that you can give emotional support to people with AIDS.

- Find out about their needs and what they can do for themselves each day
- Share feelings - be honest and open
- Encourage them to do as much as possible for themselves
- Give support and praise when deserved
- Ask them how they want things done - wash, food, cleaning
- Encourage anger and crying
- Look after yourself - take breaks, ask for help

The steps on the left side of the box are already filled in; the right side of the box is left blank. There are example statements in italics, but answers will vary from student to student.

1. For the situation described, write an assertive script in the empty part of the “Script box”.

Response: I guess I’m a little jealous, so I’ll try to make them my friends too.

2. For the situation described, write an assertive refuse, delay and bargain message in the empty part of the “Script box”.

Situation: You are at a party with friends. They are drinking beer and offer you one. You really don’t want the beer and tell them so. They continue to pressure you to drink and finally you respond with a refusal, bargain and delay response.

They make a distracting statement: You really get red when you’re angry.

They make a persuasive statement: Well, what are you here for if you don’t want to drink?

3. For the situation described, write an assertive refuse, delay and bargain message in the empty “Script Box” for a person who does not want to wear a condom.

Situation: You are going out with a person you really like. She/he wants to have sexual intercourse with you but does not want to use a condom. You will only have sex if a condom is used and you have a condom with you.

He/she makes a distracting statement: Look, don’t try to tell me what to do.

He/she makes a persuasive statement: They just don’t feel good and it would probably break anyway.

4. Arrange the following list of steps to use a condom in the correct order, by placing the number (1,2, 3, etc.) from the column “Condom steps” beside the number in the right-hand column “Correct order of steps.”

1. Dacobi and Kandu are close friends but live in different towns. They often visit each other and on one visit, Kandu asks Dacobi how AIDS is prevented. Dacobi has had a few classes about AIDS in school but can’t remember everything he was taught. However, he does tell Kandu what he knows about prevention. Some of what he says is not true. Mark an “F” for these statements. Mark “T” for those statements that are true.

3. You are talking with three of your same-sex friends about “lines” young people use to get “sex.” The group decides to try to come up with good responses to these “lines”. What would you say in response to the following lines:

4. Ranjki is a person who will be going to your school next year and everyone knows that he has HIV. He is not sick now and he is really looking forward to entering his new school. List four things you could do to show compassion and support for Ranjki when he arrives at your school.

· Stay with him during breaks.
· Go to his place and welcome him to your school.
· Walk to school or from school with him.
· Ask him to sit near you.
· Be in the same group when possible.
· Get other students to help support Ranjki.

5. Your best friend has really negative feelings about condoms. Every time you talk about condoms, this person has something negative to say about them. You decide that you will make a positive comment about condoms for every negative one that is made. What do you reply to each of the following: