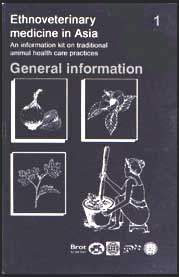 How to use these manuals

The ethnoveterinary information in this set of manuals is intended for use in the field by animal husbandry and agricultural extension personnel (both government and NGO), paraveterinarians, local livestock healers and veterinarians. The manuals can serve as reference materials for livestock care and treatment, can be used to validate or cross-check existing practices and experiences from throughout Asia and can be a source of inspiration to further test ethnoveterinary practices.

The manuals describe indigenous practices which have been shared by the workshop participants. They focus on the tropical region of Asia because areas across this similar agro-climatic zone will have similar flora. This helps to ensure that the plantbased ethnoveterinary remedies recommended in the manuals will be widely available and equally applicable.

Structure and organization of the manuals

The set is divided into four Booklets, three of which are species-specific: ruminants (small and large), swine and poultry. This fourth Booklet contains topics which are general in nature, are not species-specific and are. therefore, applicable to any of the species presented in the manuals.

The topics in the species-specific manuals are not necessarily divided along disease categories, but rather have been broadly presented to include the whole spectrum of "conditions" which a field practitioner may encounter in the care and management of livestock. Additionally, the manuals do not solely present a curative perspective to livestock care, but also include a range of traditional practices (e.g., housing, feeding, breeding, etc.) that focus on maintaining animal health and preventing diseases.

Cross-references (e.g., "see Housing") refer the reader to other relevant sections of the manuals. The References section contains publications that were consulted during the workshop to validate any particular remedy or that contain information on ethnoveterinary medicine.

Because of linguistic diversity across the region, the various remedies list the ingredients by their botanical (or Latin) name and a common English name. Many widely practiced remedies use commonly available and widely known species (e.g., garlic, ginger, coconut, banana, guava), so will be widely applicable. For such species, only the English name may appear in the text. The corresponding Latin name can be found in the Glossary of English and botanical names (page 46 in this manual). The Glossary of medicinal plants (page 49) provides the botanical name, the various plant Parts used and the known uses for each of the plants mentioned in the manuals.

$ This symbol marks diseases that can affect humans.

The treatments or remedies which require multiple ingredients are presented in a step-by-step "recipe" format which lists all ingredients to be used and describes how to prepare them. Many remedies which require only a single ingredient are presented in tables. Each remedy is identified by the "·" mark; where several remedies are presented, the choice of the remedy is left to the user. The specific socio-religious context of any given remedy has not been included, even though this may be critically important within the culture where the remedy or practice originates.

All remedies and most dosages are based on local stockraisers' practices. Most treatments are widely used within a country or region and cannot be attributed to a single person or village. In a few cases, a remedy is known to be used by a certain individual. For such remedies, the individual's name and village are given.

After each treatment, the countries where the treatment is practiced (as validated by the workshop group or through references) are presented in boldface. Immediately after the names of the countries is a series of numbers that reflect the validation criteria used in the workshop:

5 The remedy is cited in the literature in one of two ways: (1) it is used to treat the same problem in humans or another animal species; or (2) this plant has proven pharmacological activity to treat the problem in question. For instance, laboratory tests have shown that Nicotiana tabacum (tobacco) leaf extract is effective against Staphylococcus aureus bacteria in vitro (Syat 1990). This tends to support the use of tobacco leaves in treating wounds.

6 The remedy has been scientifically validated as effective to treat the problem in the livestock species in question. Relevant references are given under the corresponding plant name in the Glossary of medicinal plants.

As can be seen from the validation codes after each remedy, relatively few treatments have been scientifically validated in the species in question (code 6). The wide use of some other plants or remedies in several locations or countries, however, lends support for the farmers' claim that these remedies are effective. It also suggests the need for careful scientific evaluation of these remedies, both in the laboratory and in clinical trials.

Because of the lack of scientific testing, it is not possible to vouch that every ingredient in every remedy acts directly to solve the problem in question. There may be additive, synergetic or nutritional effects that help alleviate the problem. It must be stressed again that these are remedies used by farmers and stockraisers. The workshop participants and IIRR have made every attempt to ensure that the remedies are effective and are not harmful. However, they cannot guarantee this or be held liable for any problems that arise from applying these practices.

Dosages and preparation methods in indigenous practice are often imprecise and vary widely between individuals and regions. The dosages and methods given are those that, according to the professional judgement and experience of the workshop participants, are most suitable, are easy to prepare and are likely to be effective.

Unless noted to the contrary, all dosage quantities for treatments are for single dosage applications; in other words, each treatment should be prepared at the time of application according to the quantities specified. Dosages for treatments in swine are usually given in terms of live body weight (a simple calculation procedure for estimating live body weight for all species is explained on page 31). Remedies for ruminants are generally stated in terms of dosages for adult cattle or buffaloes. It is important to use appropriate dosages: for instance, a dose for an adult cow could kill a goat; on the other hand, a dose suitable for a goat may have no effect on a cow. Dosages for poultry are usually the amount needed to treat 10 adult birds.

Where possible, simple measurements (handful, cup, etc.) have been given for ease of use by field practitioners. More detailed measurements (milliliters, etc.) are also given to allow a practitioner to be as precise as the particular conditions may allow. The section on Common ''nils of measurement (page 28) gives approximate equivalents for various measures used.